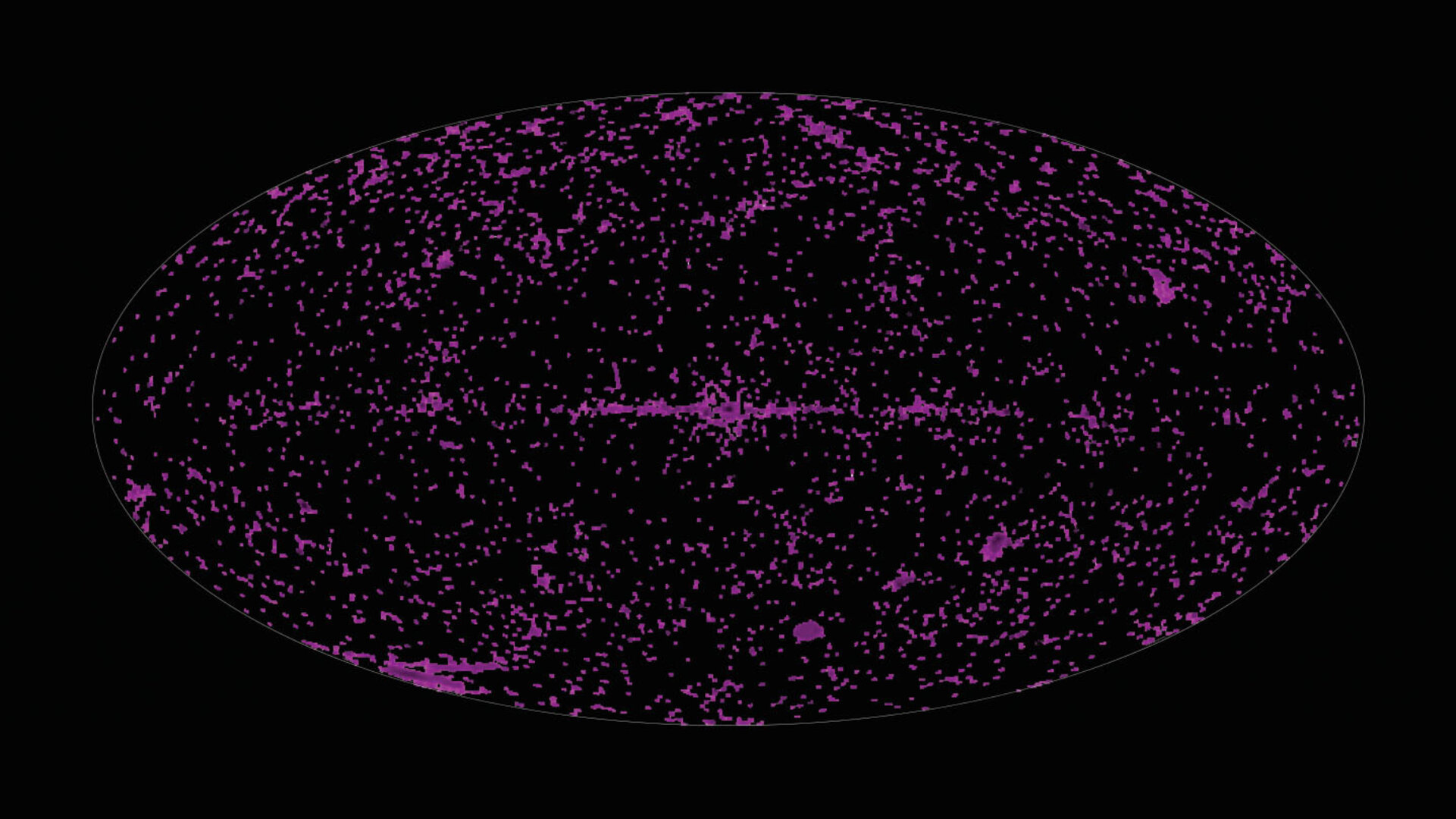 The purple lines and blotches scattered across this image show something incredible: all of the X-ray sources that were serendipitously detected – that is, not intentionally targeted – by ESA’s XMM-Newton X-ray space observatory from 2000 to 2017.

This image is based on a catalogue named 3XMM-DR8, the latest publicly released catalogue of serendipitous XMM-Newton X-ray sources, created on behalf of ESA by the XMM-Newton Survey Science Centre.

The catalogue, released in May 2018, features sources in the 0.2 to 12 keV energy range drawn from 10 242 observations made by XMM-Newton’s European Photon Imaging Camera (EPIC), an instrument capable of detecting very faint sources and rapid changes in intensity, between 3 February 2000 and 30 November 2017. It contains 532 more observations and 47 363 more detections than the preceding 3XMM-DR7 catalogue, which was made public in June 2017.

While the pattern of sources across the sky may appear random, some structure can be seen here. The oval represents the celestial sphere, an abstract perspective upon which our observations of the Universe are projected. The data are plotted in galactic coordinates, such that the centre of the plot corresponds to the centre of our Milky Way galaxy – and this can be seen in the image. Through the centre of the oval is a horizontal line, where patches of purple appear to draw together. This line is the plane of the Milky Way galaxy, with the large splotch of colour in the centre corresponding to our galaxy’s core, where XMM-Newton made a higher number of serendipitous detections.

XMM-Newton has been orbiting the Earth since 1999, observing the cosmos around us while on the hunt for X-rays coming from high-energy phenomena such as black holes, stellar winds, pulsars, and neutron stars. With every patch of sky that XMM-Newton observes, the telescope detects between 50 and 100 serendipitous sources, such as those shown here, besides the objects that were the original target of the observations. This is due to the large collecting area of the telescope’s mirrors and its wide field of view.

All-sky images and large-scale cosmic data are immensely valuable in our study of the cosmos. Upcoming missions – such as the eROSITA space telescope, a German-led satellite scheduled for launch on 12 July to complete the first all-sky survey in the medium-energy X-ray band, up to 10keV – will add to this wealth of knowledge, and help further our understanding of the X-ray Universe.