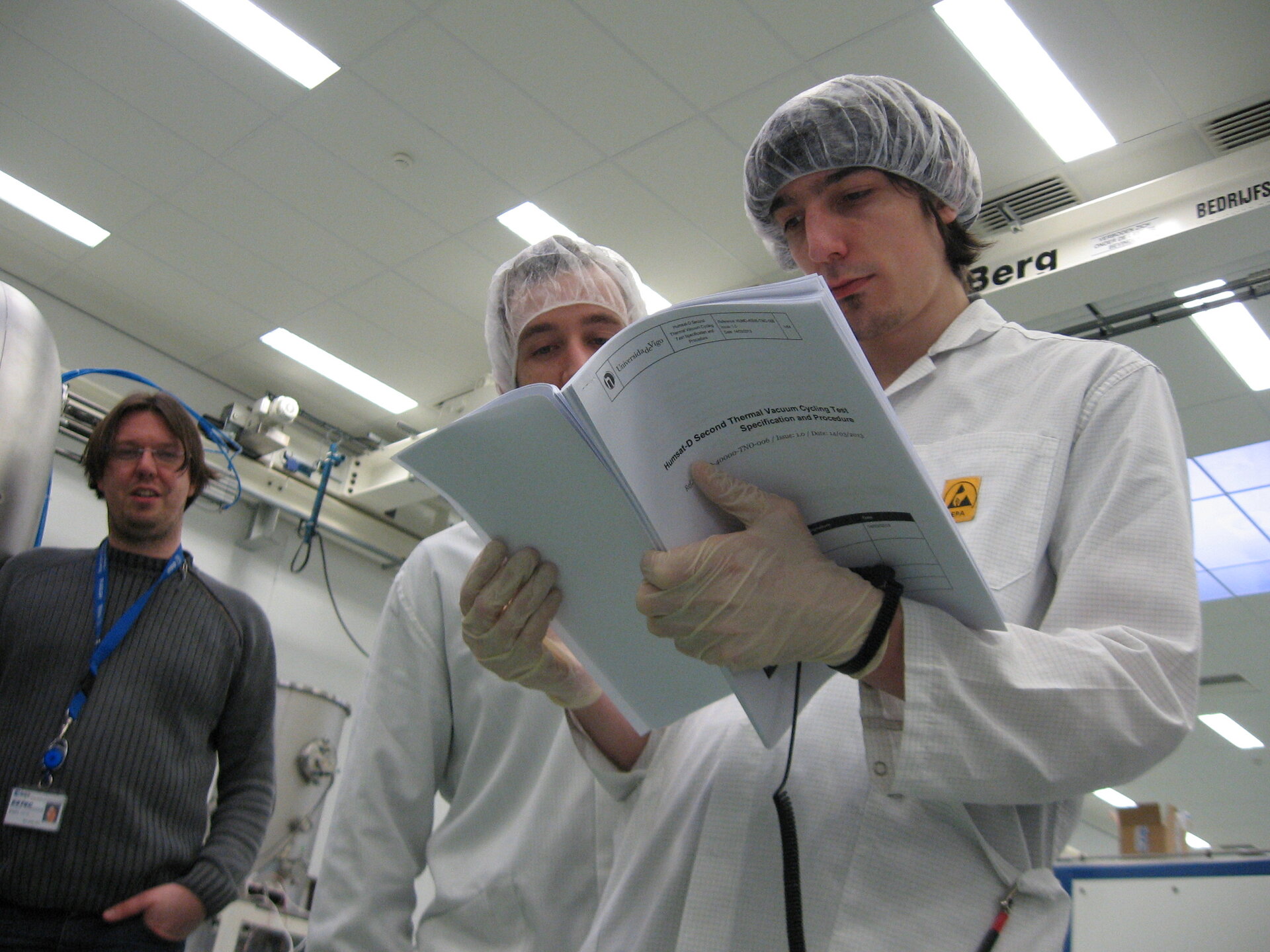 An important  step towards readiness for launch was achieved by the HumSat-D CubeSat, developed by a students teams from the University of Vigo, Spain, when it passed its programme of thermal vacuum tests at ESA’s Space Technology and Research Centre (ESTEC) in The Netherlands.

For the stringent environmental tests held at ESTEC 18-28 March, the ESA Education Office supported and supervised the team of Vigo students during their preparation for the Thermal Vacuum Cycling Testing (TV/TC). ESA experts were on hand to suggest how best to prepare the relevant technical documentation and conduct the test campaign. The team was also assisted in performing structural testing, with the support of an ESA structural expert.

Similar to the programmes employed prior to the launch of large scientific and commercial satellites, the TV/TC exposed HumSat-D to a sequence of four cycles of high and low temperatures. This enabled the Vigo team to assess the satellite’s performance in different thermal environments, comparable to the environment to which the satellite is expected to be exposed during its orbital flight.

During a first  Thermal Vacuum test campaign, performed at ESTEC in October 2012, four malfunctions were detected, two of which could have threatened HumSat-D’s mission. Based on recommendations from ESA Quality Assurance specialists, the Vigo team adopted a methodical approach to investigate the malfunctions and to  identify the root causes, thus enabling their CubeSat  to pass the subsequent TV/TC test campaign with flying colours.

“Most CubeSat projects are unable to perform full environmental test campaigns, due to their high cost, and sometimes they miss the experience to perform the tests in the best possible way” said Prof. Fernando Aguado Agelet, Project Manager of HumSat-D. “In the case of HUMSAT-D, the support of the ESA Education Office has been excellent, both from the technical and the educational point of view.”

Members of the HumSat-D students team all agreed that their participation in Thermal Vacuum Cycling tests at ESTEC had been invaluable.

“The experience of working with ESA experts allowed us to increase our professional skills and to get more confidence that our spacecraft will meet the objectives of its mission. ”

“Beyond the educational opportunity that this test campaign offered to the students team that was involved, for the ESA Education Office the HumSat-D test campaign has been also a useful test bench in preparation for future  environmental test campaigns that we will organise for other students built CubeSats” said Piero Galeone, Head of the Tertiary Education Unit in ESA’s Education Office.

“Building upon the experience that we gained with HumSat-D, we have just started a new educational programme, ‘Fly Your Satellite!', during which we will perform full testing of several students built CubeSats before their launch.”