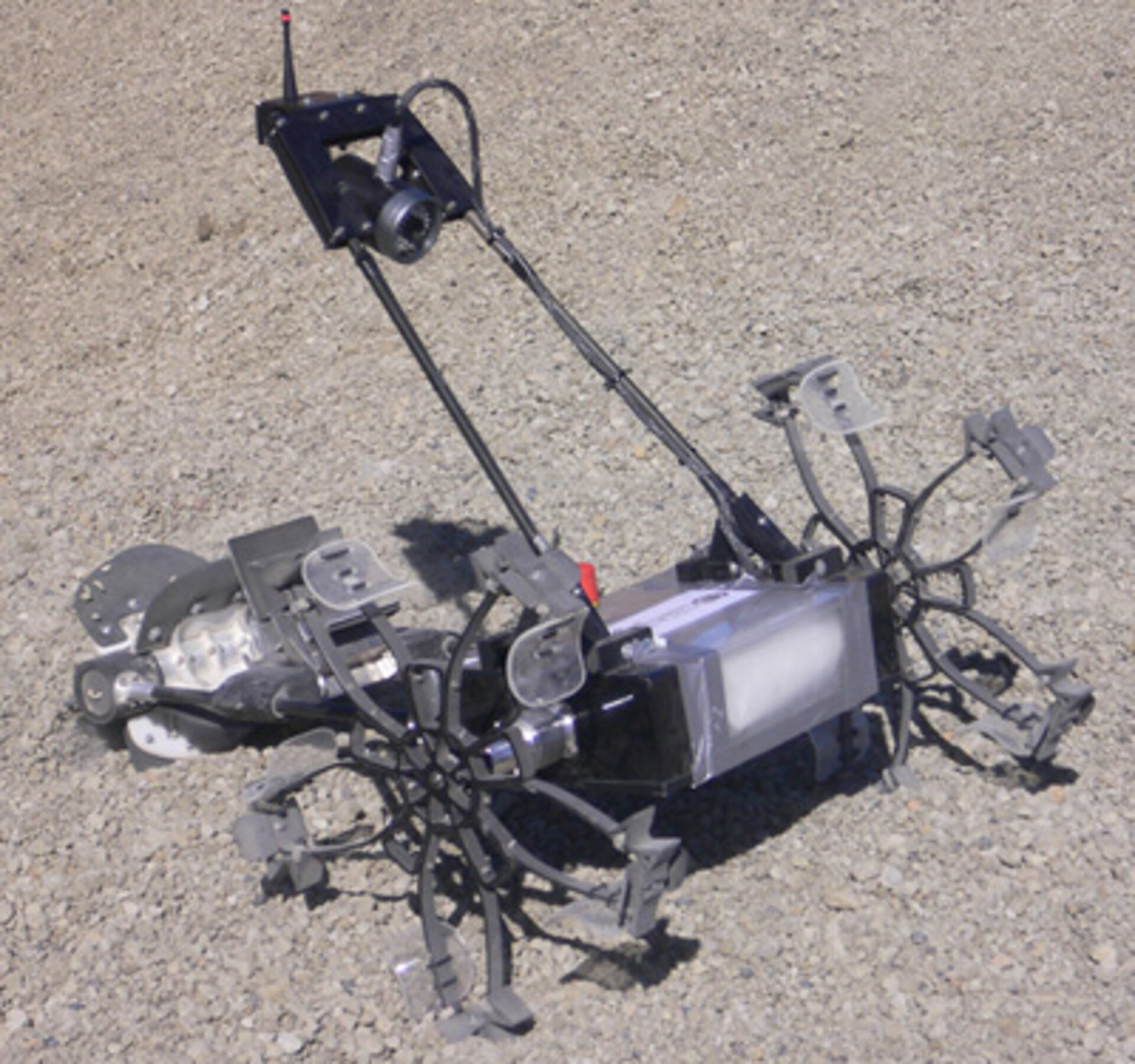 A robot rover designed by a Bremen university team has won an ESA contest to retrieve soil samples from a lunar-style terrestrial crater. Eight student teams fielded rovers during the event, their progress monitored by an advanced 3-D viewer already flight-tested in space and planned for eventual deployment on the Moon.

Craters surrounding the Moon's poles are a top 21st Century science target. Lunar researchers believe these craters may be 'cold traps', preserving ancient water ice deposits. Such ice would not only be an invaluable time capsule, it would also support manned lunar settlements. But the only way to verify the ice is there is to go fetch it, which is where rovers come in.

The bleak pumice landscape of Minas de San José within Tenerife's Teide National Park stood in for the Moon during the inaugural ESA Lunar Robotics Challenge (LRC). Built within strict size, weight and power constraints, the rovers had to descend down the steep 40° slopes of a 15-metre deep crater, grab 0.1 kg of specifically selected soil then carry it out again – all the while in darkness.

Working from a trailer camp 2000 metres up, each five-strong team was confronted with some distinctly non-lunar weather including heavy rain and clouds. In the event only one rover managed to complete the assignment –Bremen's three-wheeled CESAR (Crater Exploration and Sample Return) robot, duly judged LRC winner on 26 October.

The rovers were not the only hardware undergoing field testing. "The location was an excellent place to exercise the capabilities of the Erasmus Recording Binocular (ERB)," explained Massimo Sabbatini of ESA's Human Spaceflight Directorate. "This innovative high-resolution stereo-video recorder will become part of the standard toolset of astronauts when surveying lunar areas."

Despite being more than 2000 km away from the European mainland the test site was kept linked with the internet by a satellite ground station provided by ESA's Telecom Directorate, which enabled remote team members to follow the event and even debug rover software as needed.

Francesco Feliciani of ESA’s Telecom Directorate said: "The successful live transmission of the videos streams from the LRC proves that the technology is ready to be used in real life applications.”

The broadband-quality transmission was made possible by the ESA co-funded AmerHis regenerative payload hosted aboard Hispatsat’s Amazonas spacecraft. AmerHis works as an internet router in the sky.

Stefano Badessi also of ESA Telecom commented: “Our satellite terminal allowed those team members who could not be on the Teide in person to watch how their teammates were faring.”

Jury member Richard Fisackerly paid particular attention to the control stations teams employed to communicate with their rovers. As part of ESA's Aurora Programme developing technology for manned and robotic exploration of the Moon and Mars, Fisasckerly plans to apply the student experience into terminals planned for lunar astronauts to interact with robot assistants.

Adverse weather conditions affected preliminary trials and also meant two of the rovers – fielded by the University of Pisa and Scuola Superiore Sant'Anna – were forced to perform the Challenge in daytime rather than at night.

This being so, the jury decided against formally ranking the teams but did compile a scoreboard to give feedback on strategic choices. LRC judge and organiser Gianfranco Visentin said: "We hope that this information will increase the wisdom of the teams for future competitions."

Also affecting scoreboard figures, the University of Surrey's SELENE proved unable to take part due to a mechanical failure while Scuola Superiore Sant'Anna's pESApod was shorted out by rainfall.

Lucio Scolamiero, member of the jury and co-proposer of the LRC, declared “Only six months ago most of the rovers were only at drawing board level. What the student teams have done in such a short time has been a challenge in itself, they all deserve to be considered winners of this challenge”.

The eight rover teams will share their experiences on 14 November at a special session concluding ESA's 10th Workshop on Advanced Space Technologies for Robotics and Automation.

Video footage of CESAR and the other rovers in action is linked from the article:
Lunar Robotics Challenge: A successful cooperation within ESA