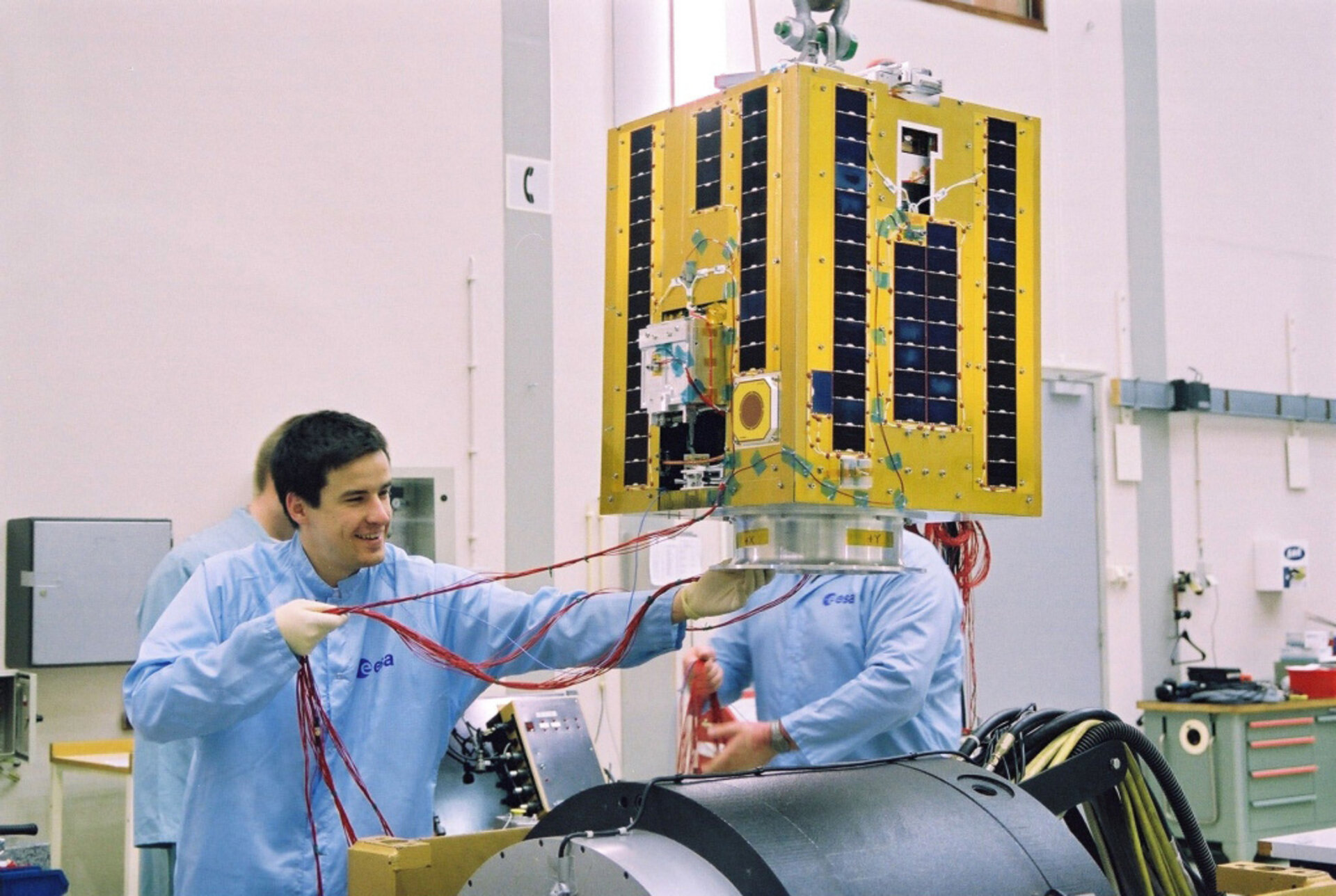 The SSETI Express educational space mission received vital assistance with spacecraft integration and testing at ESA ESTEC. The student project to design, build and launch a satellite would not have been possible without the use of the ESTEC facilities and the technical assistance provided by personnel from ESA’s Directorate of Technical and Quality Management.

In its ESTEC Test Centre, ESA maintains facilities for the testing of space vehicles and their subsystems and components. The centre is part of ESA’s European Space Research and Technology Centre (ESTEC), located at Noordwijk in The Netherlands. The ESTEC test facilities have the capability of simulating the conditions that spacecraft will experience during launch and once they are in space. The test facilities are used by ESA’s own projects but they are also available for use by external organisations.

The objective of the Student Space Exploration and Technology Initiative (SSETI) is to provide young people with a learning and motivational experience through hands-on work on real space missions. Offering this opportunity is intended to ensure the availability of an experienced and talented future workforce for European space activities. Organised by the ESA Education Department, SSETI is a network of students, educational institutions and organisations facilitating the distributed design, construction, launch and operation of micro-satellites and, in the future, more complex projects such as a moon lander.

The first spacecraft design undertaken by SSETI was the European Student Earth Orbiter (ESEO), a 120 kg micro-satellite designed for an Ariane 5 'piggyback' launch and mission duration of two months. While slow but steady progress has been made on ESEO, it became apparent during 2003 that many of SSETI’s most talented students would complete their studies without having had the opportunity to see their hardware fly and that enthusiasm, both within the SSETI team and among their supporting organisations, was declining.

It was decided to address these problems with an 'express' mission, in the style of Mars Express. SSETI Express was born as a result of this decision, with the intention of not only re-motivating the team but also acting as a technological test-bed, a logistical precursor to ESEO and as a demonstration of capability.

SSETI Express will launch from the Plesetsk cosmodrome on In addition to acting as a test bed, SSETI Express will deploy CUBESAT pico-satellites developed by European universities, take pictures of the Earth and function as a radio transponder.

During its development, SSETI Express has undergone reviews of its design, including a Flight Readiness Review conducted within the Education Department. Many ESA experts have assisted with the design and review process, most of them members of the Directorate of Technical and Quality Management.

The integration of the various spacecraft subsystems was conducted in a clean room at ESTEC. Specialist tools and expertise were made available during the assembly of the hardware. The mechanical workshop at ESTEC offered invaluable advice and fabricated a number of small items needed during the integration process, which would have been impossible without this assistance.

The ESTEC Test Centre made some of its facilities available to SSETI Express for spacecraft-level testing. The use of these facilities and the assistance of the personnel who operate them were instrumental in allowing the satellite to built so quickly and at such low cost.

SSETI Express spent about two days in an anechoic chamber undergoing electromagnetic compatibility (EMC) testing. This ensures that the spacecraft systems all operate without causing radio or electrical interference to one another.

In order to confirm that it was capable of withstanding the mechanical stresses of the launch environment, SSETI Express was mounted on a shaker table and subjected to vibration and shocks representative of those it will experience in August.

Due to the vacuum in space, the thermal exchanges in orbital vehicles are strongly dependent on radiation effects as compared to the situation on the ground. All thermal dissipation, of both internally generated heat and that due to the solar illumination, has to be managed by means of radiation in order to keep the spacecraft equipment at the correct temperature. To verify its thermal performance under real operating conditions, SSETI Express was placed in a vacuum chamber in the Mechanical Systems Laboratory (MSL) to simulate the space environment. Thermal balance and vacuum testing were performed with the support of the MSL engineers.

All the spacecraft-level tests were satisfactorily completed.

System-level functional testing was conducted while the spacecraft was in the ESTEC clean room. A ground segment simulator adjacent to the spacecraft was connected via a laptop computer and the Internet to the mission control computer in Denmark. A further Internet connection allowed the satellite operations team in Poland to control SSETI Express during testing, communicating with staff at ESTEC via Internet based messaging.

SSETI Express has progressed from kick-off to FRR in 18 months, which is probably the fastest ever spacecraft design and construction project. By using donated materials, equipment and expertise, the total expenditure has been kept below compared to a likely cost in excess of had the project proceeded on a commercial basis. SSETI Express System Engineer Neil Melville said: "Without the facilities and expertise provided by the ESA-ESTEC Test Centre, coupled with generous donations of material and components by the European space industry, it would not have been possible to build the spacecraft. All of the students and the academic institutions collaborating on this project are extremely grateful for this vital assistance and the exciting and educational opportunity it has given them."