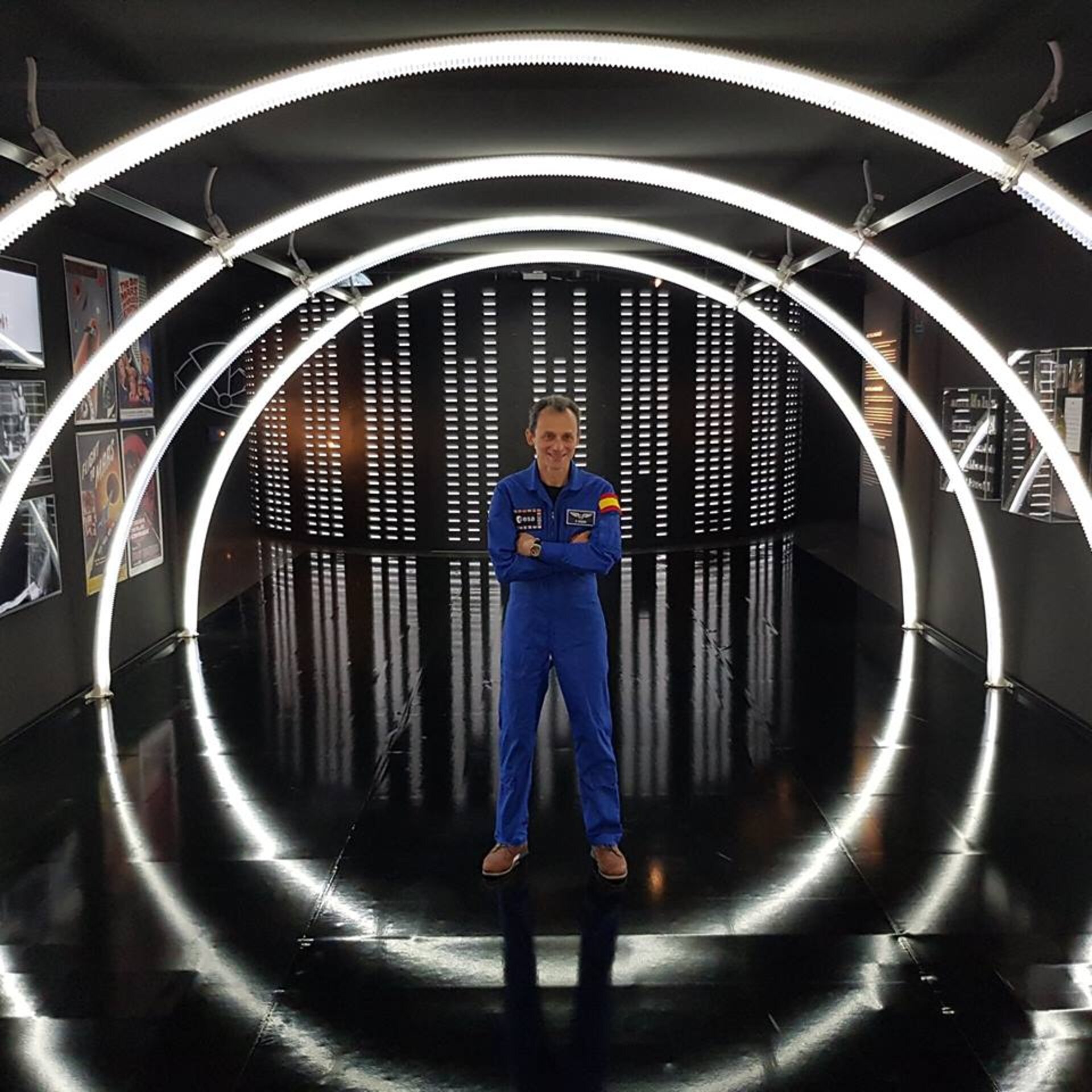 Pedro Duque was born on 14 March 1963 in Madrid, Spain. He is married and has three children. Pedro enjoys diving, swimming and cycling.

Pedro graduated with a degree in Aeronautical Engineering from the Escuela Técnica Superior de Ingenieros Aeronáuticos at the Universidad Politécnica in Madrid in 1986.

Pedro joined the Grupo Mecánica del Vuelo in 1986 and worked at ESA’s European Space Operations Centre in Darmstadt, Germany, to support the Precise Orbit Determination Group. Until 1992, he worked on developing models for orbit determination and algorithms, and implementing orbit computation software. Pedro was also part of the Flight Control Team for ESA’s ERS-1 satellite and Eureca, the European Retrievable Carrier.

In May 1992 Pedro was selected to join ESA’s Astronaut Corps based at the European Astronaut Centre (EAC) in Cologne, Germany. He completed the Introductory and Basic Training Programmes at EAC and a four-week training programme at the Russian Cosmonaut Training Centre in Star City, Russia.

In August 1993, Pedro returned to Star City to train for the ESA–Russian EuroMir-94 mission. During that mission, which took place from 3 October to 4 November 1994, Pedro was the prime Crew Interface Coordinator in the Russian Mission Control Centre in Moscow. He served as coordinator between the astronauts on Mir and the European scientists.

In May 1995, NASA selected Pedro as an Alternate Payload Specialist for the STS-78 Space Shuttle Life and Microgravity Spacelab mission that flew in June 1996. During the 17-day mission, Pedro was one of the two Crew Interface Coordinators, communicating with researchers on Earth and the astronauts on Space Shuttle Columbia about the experiments. ESA flew five major facilities on the mission and was responsible for more than half of the experiments performed.

In August 1996, Pedro entered the Mission Specialist Class at NASA’s Johnson Space Center in Houston, USA. This training led to his certification as Mission Specialist in April 1998, qualifying him for assignments on the Space Shuttle.

In 1999, Pedro was assigned to ESA’s technical heart, ESTEC, in Noordwijk, the Netherlands, supporting the Module Projects Division in what was then the Directorate of Manned Spaceflight and Microgravity.

Pedro worked on Europe’s Columbus laboratory and the Cupola module on the International Space Station as crew support until 2002 and returned to this task several months after his second flight. Pedro reviewed their design from the point of view of operations and maintenance, evaluated ergonomics and evaluated displays and procedures as well as participating in safety reviews.

In April 2001 Pedro was assigned to the first International Space Station advanced training class to 2003, when he qualified for one of the first European long-term missions to the Space Station.

Pedro was seconded by ESA as Director of Operations of the Spanish User Support and operations Centre in Madrid, which is managed by the Instituto da Riva and Universidad Politécnica de Madrid. He managed the implementation and first operations of the Centre until 2006.

In October 2006, Pedro took special leave from ESA to head an Earth observation project. He led Deimos Imaging S.L. (DMI) until 2011, first as Managing Director and then as Executive President. DMI is a private company that runs a commercial Earth observation system with its own satellite and ground stations.

In October 2011 Pedro returned to ESA after his special leave as member of ESA’s Astronaut Corps to head the Flight Operations Office. This Office, located at the Columbus Control Centre near Munich, Germany, supervises the work of the flight controllers and supports personnel that perform ground operations of the European module on the International Space Station and its utilisation programme.

Early in 2015 Pedro returned to astronaut duties and to full flight status, and among the astronauts he was responsible for the control and review of future ESA projects.

In 2018 Pedro was appointed as Minister for Science, Innovation and Universities for the Spanish Government.

Pedro flew as Mission Specialist on the Space Shuttle Discovery for STS-95 mission from 29 October to 7 November 1998. The nine-day mission was dedicated to research in weightlessness and the study of the Sun. Pedro was responsible for the five ESA scientific facilities and for the computer system on the Space Shuttle.

From 18 to 28 October 2003, Pedro flew the 10-day Cervantes mission on the International Space Station. He was Flight Engineer on the Soyuz-TMA as part of Expedition 8 and landed back on Earth as part of Expedition 7. Pedro ran an extensive experiment programme in life and physical sciences, Earth observation, education and technology, including experiments in the Microgravity Science Glovebox, a research facility developed in Europe.