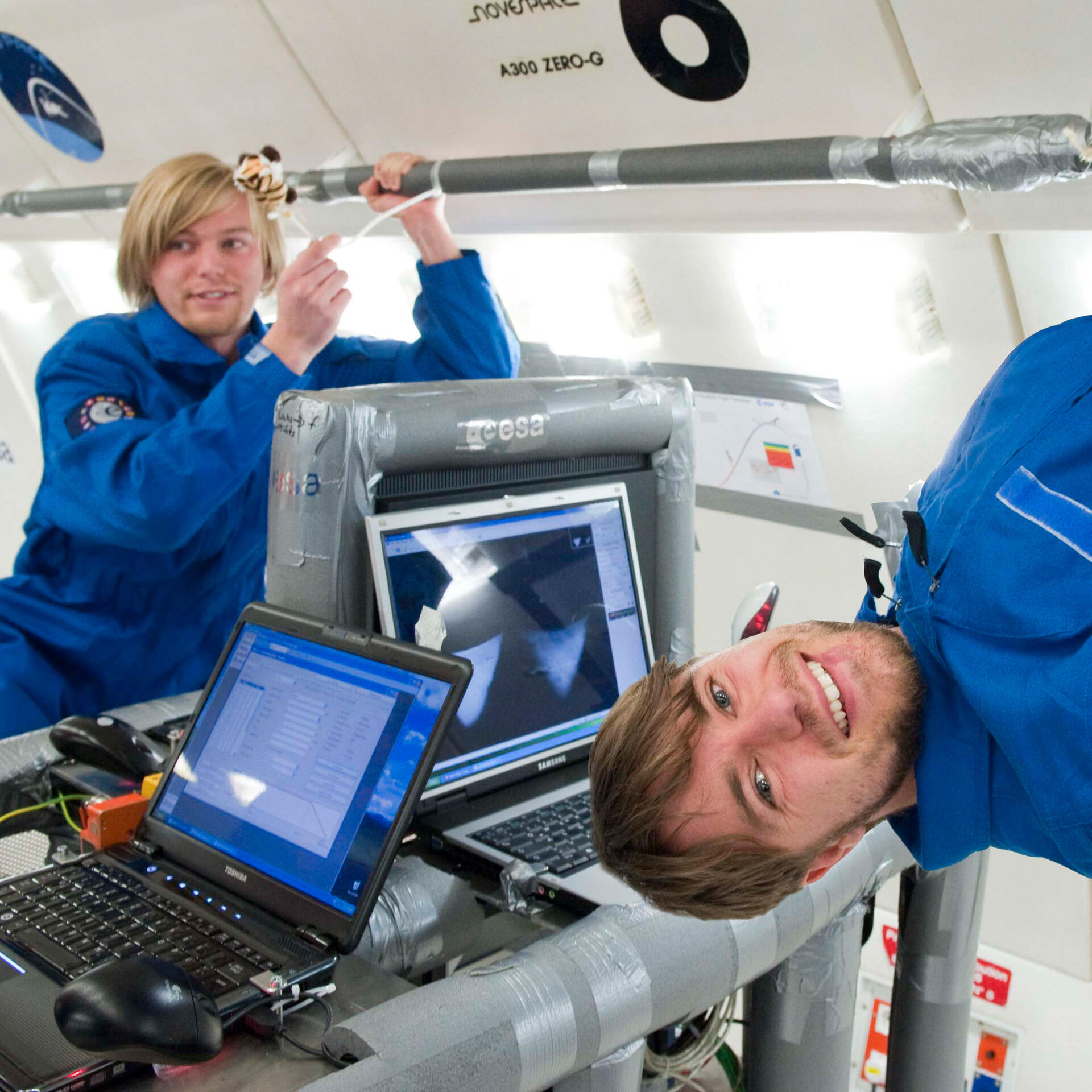 Parabolic flights with aircraft have provided microgravity conditions for scientific research, technology testing and astronaut training for the last 25 years in Europe. Now the flights can reach further into space: with a very special flight plan, the European ‘Zero-G’ Airbus can imitate gravity conditions on the Moon and Mars.

A symposium held last week at ESA’s Space Technology and Research Centre (ESTEC) in the Netherlands showed an impressive variety of scientific disciplines that frequently develop and fly experiments on ESA parabolic flight campaigns. First flown with NASA aircraft, then with a modified Caravelle and now with the Airbus A300 Zero-G, the largest aircraft in the world dedicated to parabolic flights, the European campaigns have provided a valuable tool to conduct short microgravity experiments for the last 25 years.

Pilots can create microgravity conditions for up to 22 seconds at a time by flying carefully along a parabolic path, in the same way as an object thrown into the air and falling back freely. In one flight, about 12 minutes of cumulative weightlessness can be experienced inside the plane.

ESA’s campaigns are conducted under the responsibility of the Directorate of Human Spaceflight.

Vladimir Pletser has followed the European flights since they began and is now manager for ESA’s campaigns. He had his first campaign back in 1986 and has seen the scientific progress over the last 25 years. "What we are doing now on the flights is something that we couldn’t imagine in the early days. With the cumulative experience, new technology and advances in science, we can now squeeze an enormous amount of data out of those 20 seconds of microgravity."

Pletser remembers his first flight on the NASA KC-135 aircraft: "I was so amazed about the zero-g that I forgot to start my experiment, and when after some seconds I did remember it, I was floating too far away to operate it!"

In the 1980s, microgravity experiments were conducted on very small scale during the flights organised to train the astronauts for the Spacelab missions. Nowadays, the experiments are housed in big racks and contain Xray imagers, high-speed cameras and other advanced instrumentation. "Still, the most important part of the research is the human being, as a subject or as the operator of the instruments," Pletser reminds us. "The quality of the microgravity research in Europe is very high, mostly down to the ESA parabolic flight campaigns."

Martin Zell, the Head of ESA’s ISS Utilisation Department, acclaims the ESA parabolic flights, too: "These campaigns have provided an outstanding platform for the European science community to conduct experiments in microgravity."

"With the A300 we are able to bring microgravity almost to their laboratory," continues Josef Winter, Head of ESA’s Payloads and Platforms Division. “The increasing number of experiment proposals shows clearly the interest of the European science community in this easy access platform to research under microgravity conditions.”

Read more about some of the best examples of the microgravity research campaigns here or by clicking the links on the right.

The future of space exploration is already here for the parabolic flight experimenters. On some flights, the pilots of the Airbus A300 ZeroG aircraft were able to fly parabolas where they maintained Moon (0.16 g) and Mars (0.4 g) gravity conditions for about 25 seconds. This year, these flights were officially brought into ESA’s research programme.

Both are interesting microgravity environments that can help to prepare for future missions to the Moon and Mars. Studying the effects of gravity also requires experiments in gravity levels between microgravity and full Earth gravity – and even beyond.