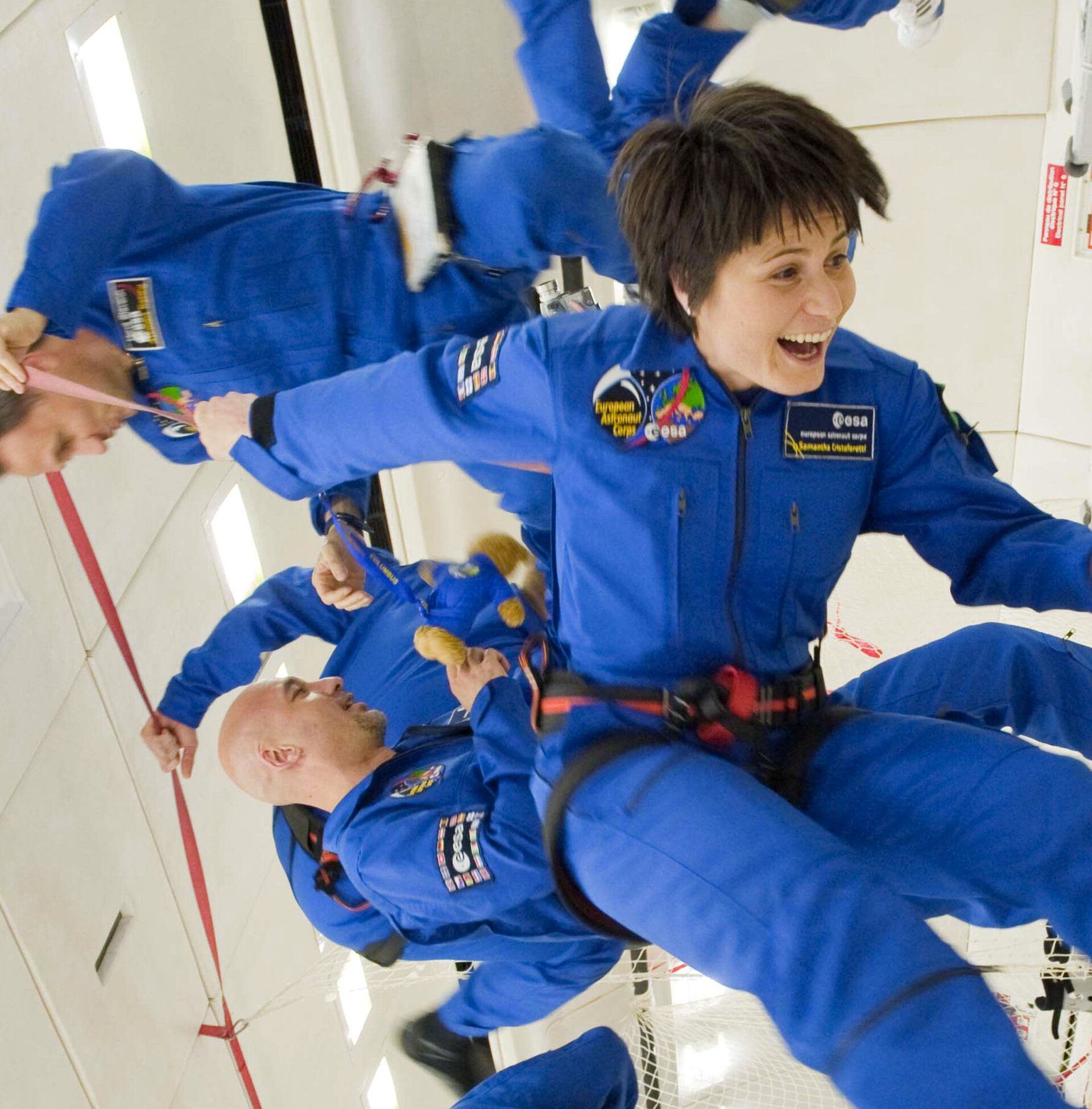 ESA's new astronaut candidates enjoyed a taste of space last Friday during a special aircraft flight in Bordeaux, France. A modified Airbus A300 offered a glimpse of their future working conditions, as well as providing microgravity for science experiments.

Planes flying a special parabolic path can simulate weightlessness for research and astronaut training. Up to 22 seconds of microgravity can be created at a time and, by repeating the manoeuvre, total weightlessness during one flight can be as much as 12 minutes.

The 'Zero-G' Airbus A300 is the biggest and most advanced plane in the world for these flights. This faithful workhorse has flown ESA’s 52nd parabolic flight campaign during recent weeks, offering weightlessness not only to scientists but also to Europe’s new astronaut candidates.

A new world for new astronauts

Samantha Cristoforetti, Alexander Gerst, Andreas Mogensen, Luca Parmitano, Timothy Peake and Thomas Pesquet have been in astronaut training since last autumn, but this was their first experience with zero gravity.

They flew free in the cabin for six parabolas and then took turns on seven training worksites and three science experiments.

The first lesson was to see Newton’s laws in action. They moved heavy containers around and threw them to each other to feel how mass and weight are not the same. They saw how an object continues on its path until an external force is applied. And just a small push can propel a box to the other side of the cabin.

Then they had to move along the side of the cabin using tethers and spacesuit gloves – far from easy even in 'normal' gravity with the bulky and stiff gloves.

Finally, the new recruits performed typical spacewalk jobs: attaching their feet in special boots to a platform and rotating their bodies through quarter and half turns using handrails like those outside the International Space Station. In weightlessness, this is all more difficult than it sounds.

"Initiating a movement does not need any effort, but stopping it requires quite a fight against your body inertia," explained Hervé Stevenin, EVA Training Lead at the European Astronaut Centre in Cologne, Germany.

"We wanted them to feel the differences between the conditions in real weightlessness and inside the Neutral Buoyancy Facility of EAC. It was also important to get accustomed to the feeling of unusual body orientation."

Since space research is an important job for astronauts, the candidates took part in some of the investigations on the aircraft.

One called for lying down during the microgravity and hypergravity periods to look at the human body’s ability to adapt to gravity changes. They also participated in 'psychomotoric' experiments, dealing with manipulation and movements in zero gravity.

The astronauts proved to be made of the right stuff in coping with weightlessness. "The candidates not only felt fine all the time, but also quickly learned to move and control themselves in the new situation," confirmed EAC trainer Stephane Ghiste.

"In addition to the training programme, they also had fun and enjoyed every second of the zero gravity!"