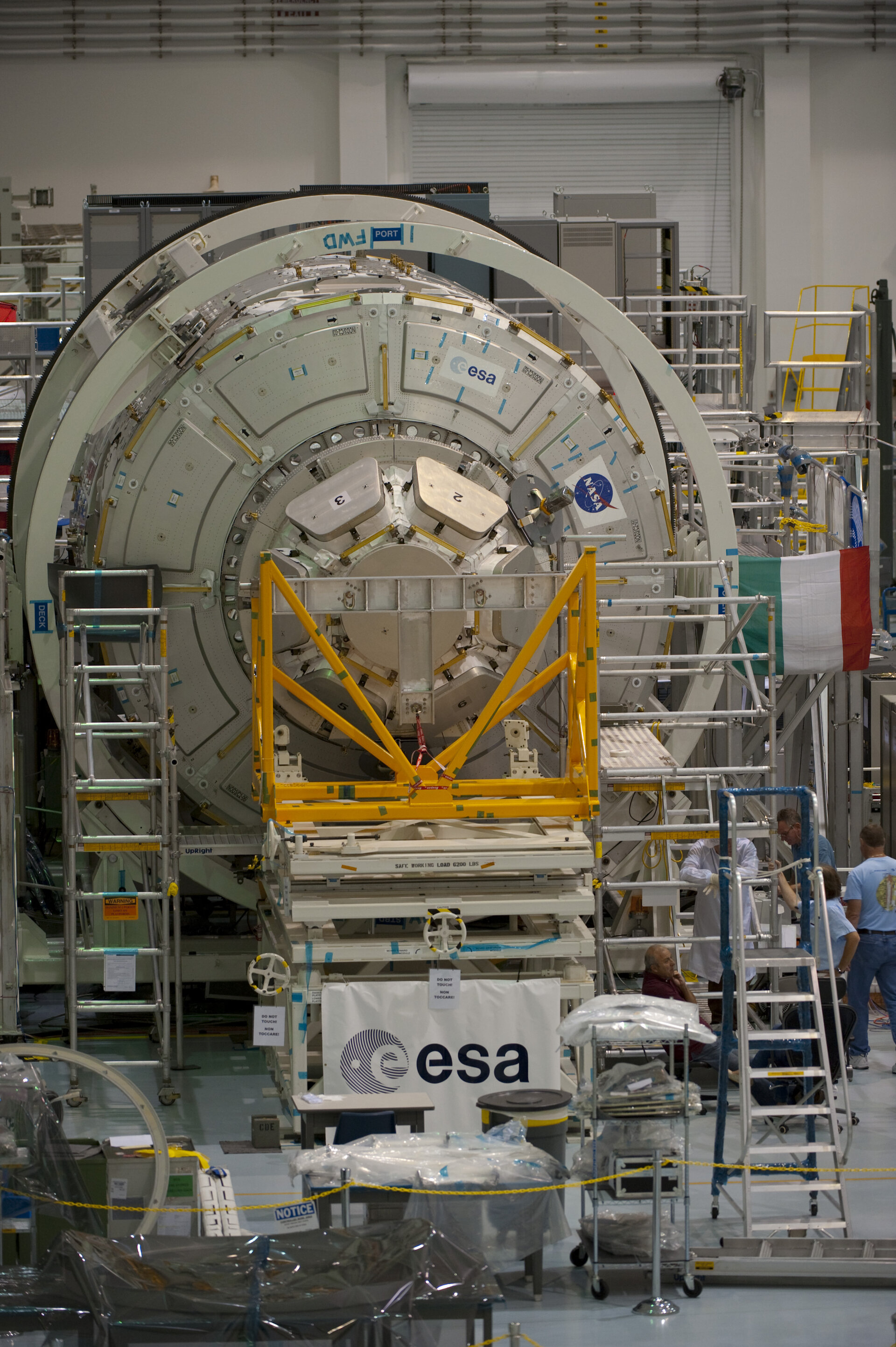 Twelve years of design, development and hard work came to fruition with the formal handover of Node 3 from ESA to NASA on 20 November. The ceremony took place in the Space Station Processing Facility at NASA's Kennedy Space Center, Florida, USA.

Node 3, one of the three ISS interconnecting modules, will now undergo final preparations for a February 2010 launch on Space Shuttle Endeavour together with the attached European-built Cupola observation module.

"Node 3 and Cupola are Europe's final major hardware contributions to the ISS," said Mr Patti. "Once attached to the ISS in February, more than one-third of the pressurised ISS elements will have been built in Europe. The ISS is now almost complete and, since we were able to add our European Columbus laboratory last year, our scientific and technological utilisation programme is in full swing and we are looking forward to its results."

Mr Patti and Mr Suffredini concluded the handover with the official signing of the Transfer of Ownership agreement for Node 3.

The handover completed the final major element of the barter agreement between ESA and NASA signed in Turin on 8 October 1997 under which ESA provided Nodes 2 and 3 plus additional equipment and knowhow in return for transportation of the European Columbus Laboratory to the ISS by Space Shuttle. Both Node 2 and the Columbus laboratory have been performing well in orbit as key elements of the ISS since October 2007 and February 2008, respectively.

"Node 3, which follows in the footsteps of Node 2 and Columbus, is generally recognised as the most complex pressurised element of the station by the ISS community," says Philippe Deloo, ESA's Project Manager for the Nodes and Cupola.

"Under ESA's management, Italian company Thales Alenia Space did an outstanding job with Node 3 in showcasing the capabilities in Europe to develop and build space technology. From its early design, this masterpiece of engineering has now evolved into an extremely complex Space Station module which will accommodate vital environmental support and life support systems for the Station’s crew."

Node 3, which was named Tranquility by NASA, will house a variety of systems and equipment covering oxygen generation, air purification and water recovery, as well as avionics equipment to control Node 3; a treadmill and a resistive exercise device to act as conditioning and exercise equipment for the ISS crew; and a Waste and Hygiene Compartment. In addition, one of Node 3's docking ports will be used as the connecting point for the Cupola observation module.

The Cupola has been at the Kennedy Space Center since 2004, with its ownership transferred to NASA in 2005. Following Node 3's arrival in May 2009, the two European-built ISS elements were mated in their launch configuration on 1 September.

Once on orbit, Node 3 will be connected to the left-hand docking port of the Unity Node 1. The Cupola observation module will then be moved to the Earth-facing port of Node 3 to act as a robotic control tower for the ISS, with a stunning view of Earth for the Station's crew.

"Node 3 and the Cupola are the final elements of a very challenging assembly phase, which has been a great learning experience for all partners," said Simonetta Di Pippo, ESA Director of Human Spaceflight.

"The fact that these modules with such important features were built in Europe says a lot about our industrial knowhow and our ability to contribute to this great international project. By having developed several ISS modules and by completing its assembly in the months to come, we will open a new era of cooperation, utilisation and exploration that will take humankind back to the Moon and beyond to other destinations while continuing to exploit the enormous possibilities in low Earth orbit."