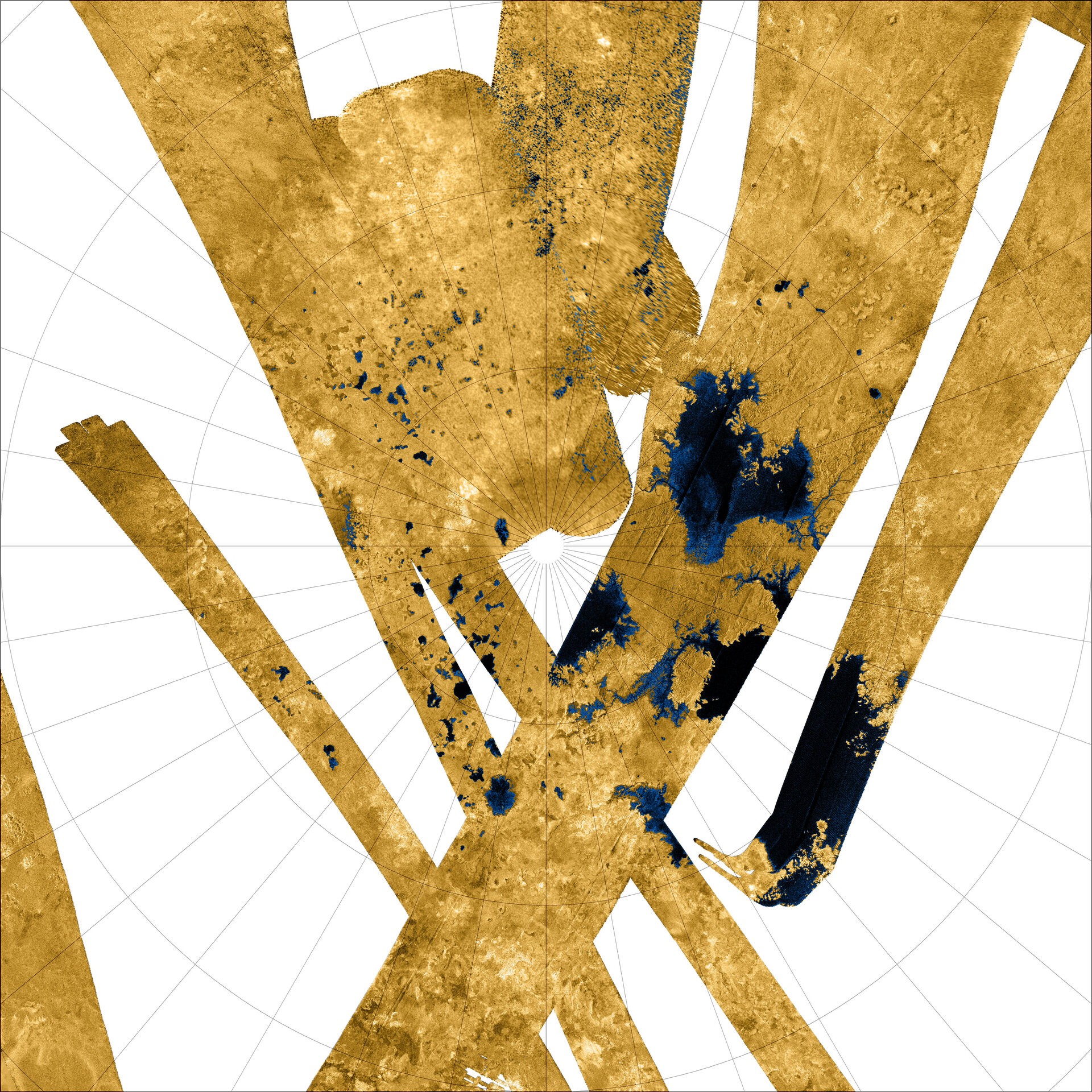 The southern region images were beamed back after a flyby on 2 October in which a prime goal was the hunt for lakes at the south pole.

A new mosaic image comprised from seven Titan fly-bys over the last year and a half shows a north pole pitted with giant lakes and seas, at least one of them larger than Lake Superior in the USA.

Approximately 60% of Titan's north polar region, above 60° north, has been mapped by Cassini's radar instrument. About 14% of the mapped region is covered by what scientists interpret as liquid hydrocarbon lakes.

"This is our version of mapping Alaska, the northern parts of Canada, Greenland, Scandinavia and Northern Russia," said Rosaly Lopes, Cassini radar scientist at the Jet Propulsion Laboratory, USA. "It is like mapping these regions of Earth for the first time."

Lakes and seas are very common at the high northern latitudes of Titan, which is in winter now. Scientists say it rains methane and ethane there, filling the lakes and seas. These liquids also carve meandering rivers and channels on the moon's surface. Now Cassini is moving into unknown territory, down to the south pole of Titan.

"We wanted to see if there are more lakes present there and, sure enough, there they are, three little lakes smiling back at us. Titan is indeed the land of lakes and seas," said Lopes. "It will be interesting to see the differences between the north and south polar regions."

It is summer at Titan's south pole. A season on Titan lasts nearly 7.5 years, one quarter of a Saturn year, which is 29.5 years long. Monitoring seasonal change helps scientists understand the processes at work there.

Scientists are making progress in understanding how the lakes may have formed. On Earth, lakes fill low spots or are created when the local topography intersects a groundwater table. Lopes and her colleagues think that the depressions containing the lakes on Titan may have been formed by volcanism or by a type of erosion (called karstic) of the surface, leaving a depression where liquids can accumulate. This type of lake is common on Earth.

"The lakes we are observing on Titan appear to be in varying states of fullness, suggesting their involvement in a complex hydrologic system akin to Earth's water cycle. This makes Titan unique among the extra-terrestrial bodies in our solar system," said Alex Hayes, a graduate student who studies Cassini radar data at the California Institute of Technology in the USA.

"The lakes we have seen so far vary in size from the smallest observable, approximately 1 square km, to greater than 100 000 square km, which is slightly larger than the great lakes in midwestern USA," Hayes said. "Of the roughly 400 observed lakes, 70% of their area is taken up by large ‘seas’ greater than 26 000 square km."

Future radar flybys will image closer to the southern pole and are expected to show more lakes.