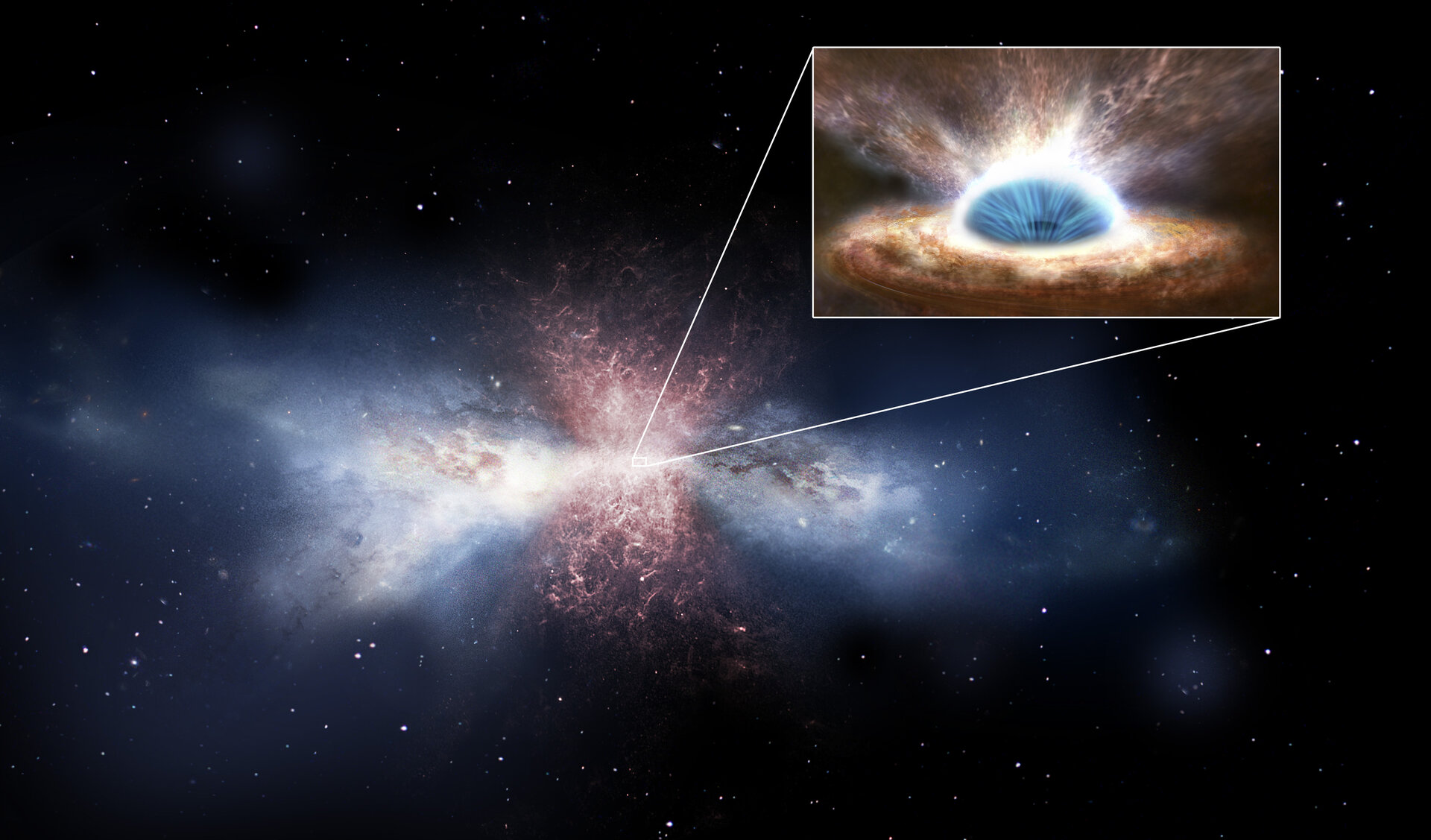 Astronomers using ESA’s Herschel space observatory have found that the winds blowing from a huge black hole are sweeping away its host galaxy’s reservoir of raw star-building material.

Found at the hearts of most galaxies, supermassive black holes are extremely dense and compact objects with masses between millions and billions of times that of our Sun.

Many are relatively passive, like the one sitting at the centre of our Milky Way. However, some of them are devouring their surroundings with a great appetite.

These active black holes not only feed on nearby gas but also expel some of it as powerful winds and jets. Astronomers have long suspected these outflows to be responsible for draining galaxies of their interstellar gas, in particular the gas molecules from which stars are born.

This could eventually affect a galaxy’s star-forming activity, slowing it down or possibly quenching it entirely.

Until now, it had not been possible to capture a complete view of this process. While astronomers were able to detect winds very close to black holes using X-ray telescopes, and to trace much larger galactic outflows of gas molecules through infrared observations, they had not succeeded at finding both in the same galaxy.

A new study has changed the scene, detecting winds driven by one particular black hole from the smallest to largest scales.

“This is the first time that we have seen a supermassive black hole in action, blowing away the galaxy’s reservoir of star-making gas,” explains Francesco Tombesi from NASA’s Goddard Space Flight Center and the University of Maryland, USA, who led the research published this week in Nature.

Combining infrared observations from ESA’s Herschel space observatory with new data from the Japanese/US Suzaku X-ray satellite, the astronomers detected the winds close to the central black hole as well as their global effect in pushing galactic gas away in a galaxy known as IRAS F11119+3257.

The winds start small and fast, gusting at about 25% the speed of light near the black hole and blowing away about the equivalent of one solar mass of gas every year.

As they progress outwards, the winds slow but sweep up an additional few hundred solar masses of gas molecules per year and push it out of the galaxy.

This is the first solid proof that black-hole winds are stripping their host galaxies of gas by driving large-scale outflows.

The new finding supports the view that black holes might ultimately stop stars forming in their host galaxies.

“Herschel has already revolutionised our understanding of how stars are born. This new result is now helping us understand why and how star formation in some galaxies can be globally affected and even switched off entirely,” says Göran Pilbratt, Herschel Project Scientist at ESA.

“The culprit of this cosmic ‘whodunnit’ has been found. As many suspected, a central black hole can power large-scale gas outflows, quenching the formation of stars.”

Read more about this discovery

“Wind from the black-hole accretion disk driving a molecular outflow in an active galaxy,” by F. Tombesi, et al., is published in the 26 March 2015 issue of the journal Nature.

The study is based on observations performed with the Photoconductor Array Camera and Spectrometer (PACS) instrument on ESA’s Herschel space observatory, as well as on data from the Japanese/US Suzaku mission.