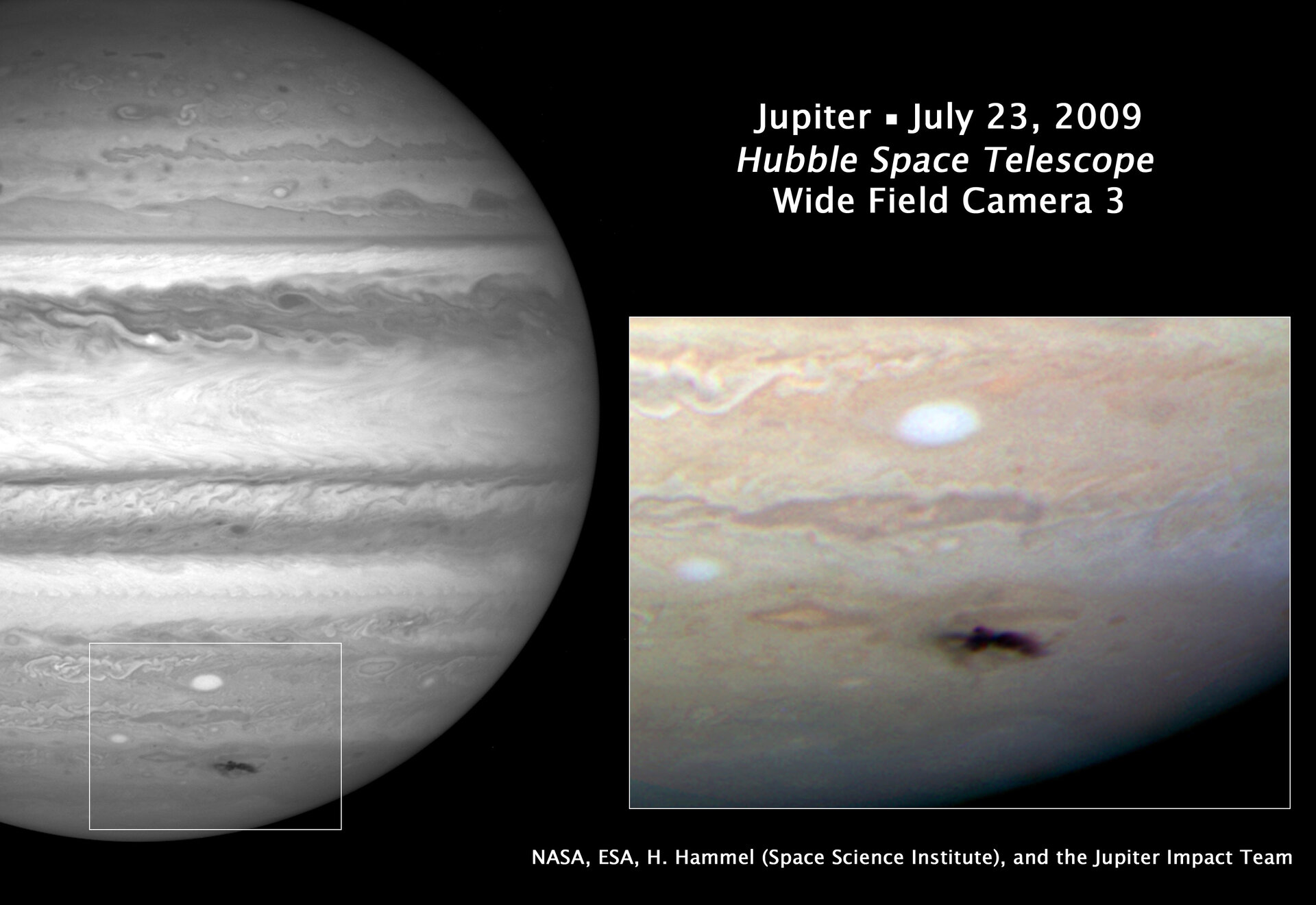 The checkout and calibration of the NASA/ESA Hubble Space Telescope has been interrupted to aim the recently refurbished observatory at a new expanding spot on the giant planet Jupiter. The spot, caused by the impact of a comet or an asteroid, is changing from day to day in the planet’s cloud tops.

For the past several days the world's largest telescopes have been trained on Jupiter. Not to miss the potentially new science in the unfolding drama 580 million kilometres away, Matt Mountain, director of the Space Telescope Science Institute in Baltimore, Maryland, allocated discretionary time to a team of astronomers led by Heidi Hammel of the Space Science Institute in Boulder, Colorado.

The Hubble picture, taken on 23 July, is the sharpest visible-light picture taken of the feature and is Hubble's first science observation following its repair and upgrade in May. Observations were taken with Hubble's new camera, the Wide Field Camera 3 (WFC3).

"This is just one example of what Hubble's new, state-of-the-art camera can do, thanks to the hard work of the astronauts and the entire Hubble team", said Ed Weiler, associate administrator of NASA's Science Mission Directorate. "Fortunately, the best is yet to come!"

"Hubble's truly exquisite imaging capability has revealed an astonishing wealth of detail in the 2009 impact site", said Hammel. "By combining these images with our ground-based data at other wavelengths, our Hubble data will allow a comprehensive understanding of exactly what is happening to the impact debris. My sincerest congratulations and thanks to the team who created Wide Field Camera 3 and to the astronauts who installed it!"

Discovered by Australian amateur astronomer Anthony Wesley on Sunday, July 19, the spot was created when a small object plunged into Jupiter's atmosphere and disintegrated. The only other time in history such a feature has been seen on Jupiter was 15 years ago.

"This is strikingly similar to the comet Shoemaker Levy 9 that impacted Jupiter in July 1994", said team member Keith Noll of the Space Telescope Science Institute.

"Since we believe this magnitude of impact is rare, we are very fortunate to see it with Hubble", added Amy Simon-Miller of NASA's Goddard Space Flight Center. She explained that the details seen in the Hubble view show a lumpiness to the debris plume caused by turbulence in Jupiter's atmosphere. The spot is presently about twice the length of the whole of Europe.

Simon-Miller estimated that the diameter of the object that slammed into Jupiter was at least twice the size of several football fields. The force of the explosion on Jupiter was thousands of times more powerful than the suspected comet or asteroid that exploded over the Tunguska River Valley in Siberia in June 1908.

The WFC3, installed by astronauts on the Space Shuttle in May, is not yet fully calibrated. So while it is possible to obtain celestial images, the camera's full power cannot yet be realised for most observations. The WFC3 can still return meaningful science images that will complement the Jupiter pictures being taken with ground-based telescopes.