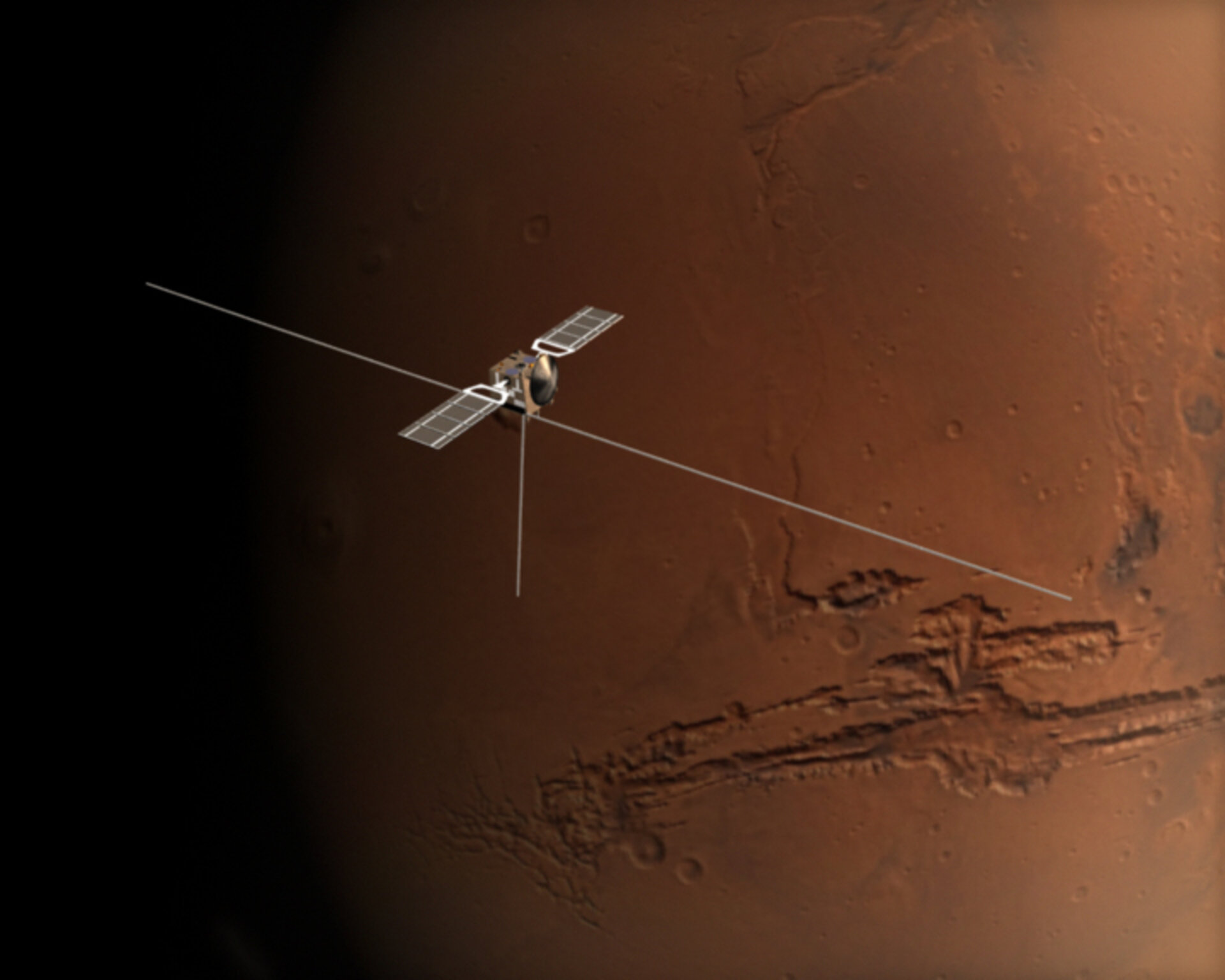 ESA PR 34-2005. MARSIS, the Mars Advanced Radar for Subsurface and Ionosphere Sounding on board ESA’s Mars Express orbiter, is now fully deployed, has undergone its first check-out and is ready to start operations around the Red Planet.

With this radar, the Mars Express orbiter at last has its full complement of instruments available to probe the planet’s atmosphere, surface and subsurface structure.

MARSIS consists of three antennas: two ‘dipole’ booms 20 metres long, and one 7-metre ‘monopole’ boom oriented perpendicular to the first two. Its importance is that it is the first-ever means of looking at what may lie below the surface of Mars.

The delicate three-stage phase of radar boom deployment, and all the following tests to verify spacecraft integrity, took place between 2 May and 19 June. Deployment of the first boom was completed on 10 May. That boom, initially stuck in unlocked mode, was later released by exploiting solar heating of its hinges.

Taking advantage of the lessons learnt from that first boom-deployment, the second 20-metre boom was successfully deployed on 14 June. Subsequently, ESA’s ground team at the European Space Operations Centre (ESOC) in Darmstadt, Germany, commanded the non-critical deployment of the third boom on 17 June, which proceeded smoothly as planned.

MARSIS’s ability to transmit radio waves in space was tried out for the first time on 19 June, when the instrument was switched on and performed a successful transmission test.

The instrument works by sending a coded stream of radio waves towards Mars at night, and analysing their distinctive echoes. From this, scientists can then make deductions about the surface and subsurface structure. The key search is for water. But MARSIS's capabilities do not stop there. The same methods can also be used by day to probe the structure of the upper atmosphere.

Before starting its scientific observations, MARSIS has to undergo its commissioning phase. This is a routine procedure for any spacecraft instrument, necessary to test its performance in orbit using real targets in situ. In this case, the commissioning will last about ten days, or 38 spacecraft orbital passes, starting on 23 June and ending on 4 July.

During the commissioning phase, MARSIS will be pointed straight down (nadir pointing mode) to look at Mars from those parts of the elliptical orbit where the spacecraft is closest to the surface (around the pericentre). During this phase, it will cover the areas of Mars between 15° S and 70° N latitude. This includes interesting features such as the northern plains and the Tharsis region, so there is a small chance of exciting discoveries being made early on.

On 4 July, when the commissioning operations end, MARSIS will start its nominal science observations. In the initial phase, it will operate in survey mode. It will make observations of the Martian globe’s night-side. This is favourable to deep subsurface sounding, because during the night the ionosphere of Mars does not interfere with the lower-frequency signals needed by the instrument to penetrate the planet's surface, down to a depth of 5 kilometres.

Through to mid-July, the radar will look at all Martian longitudes between 30° S and 60° N latitude, in nadir pointing mode. This area, which includes the smooth northern plains, may have once contained large amounts of water.

The MARSIS operation altitudes are up to 800 kilometres for subsurface sounding and up to 1200 kilometres for studying the ionosphere. From mid-July, the orbit's closest approach point will enter the day-side of Mars and stay there until December. In this phase, using higher frequency radio waves, the instrument will continue shallow probing of the subsurface and start atmospheric sounding.

“Overcoming all the technical challenges to operate an instrument like MARSIS, which had never flown in space before this mission, has been made possible thanks to magnificent cooperation between experts on both sides of the Atlantic,” said Professor David Southwood, ESA's Science Programme Director. “The effort is indeed worthwhile as, with MARSIS now at work, whatever we find, we are moving into new territory; ESA’s Mars Express is now well and truly one of the most important scientific missions to Mars to date,” he concluded.

The MARSIS instrument was developed by the University of Rome, Italy, in partnership with NASA’s Jet Propulsion Laboratory (JPL) in Pasadena, California. The instrument team is led by Prof. Giovanni Picardi. It is the first instrument to actually look below the surface of Mars, using low-frequency microwaves reflected by the different layers of matter. Among its primary objectives are the attempt to detect underground water ice and the characterisation of terrains underneath layers of sediment. In addition, MARSIS will conduct large-scale altimetry mapping and provide data on the planet’s ionosphere, as this electrically charged region of the upper atmosphere reflects radio waves too.

Mars Express was launched on 2 June 2003 and reached the Red Planet on Christmas Day that same year. MARSIS was planned to deploy its three antenna booms in April 2004, towards the end of the orbiter’s commissioning phase. Computer simulations pointed to a risk that the booms could lash back and harm the spacecraft and its instruments during deployment. ESA therefore delayed deployment until the boom supplier (JPL) and the spacecraft prime contractor (Astrium, France) together with ESA’s experts had conducted further analyses and simulations of boom behaviour during deployment and the possible impact on the spacecraft. Once the magnitude of the risk involved had been assessed and the relevant mitigation scenarios defined, ESA decided to proceed with releasing the MARSIS antennas in May 2005.