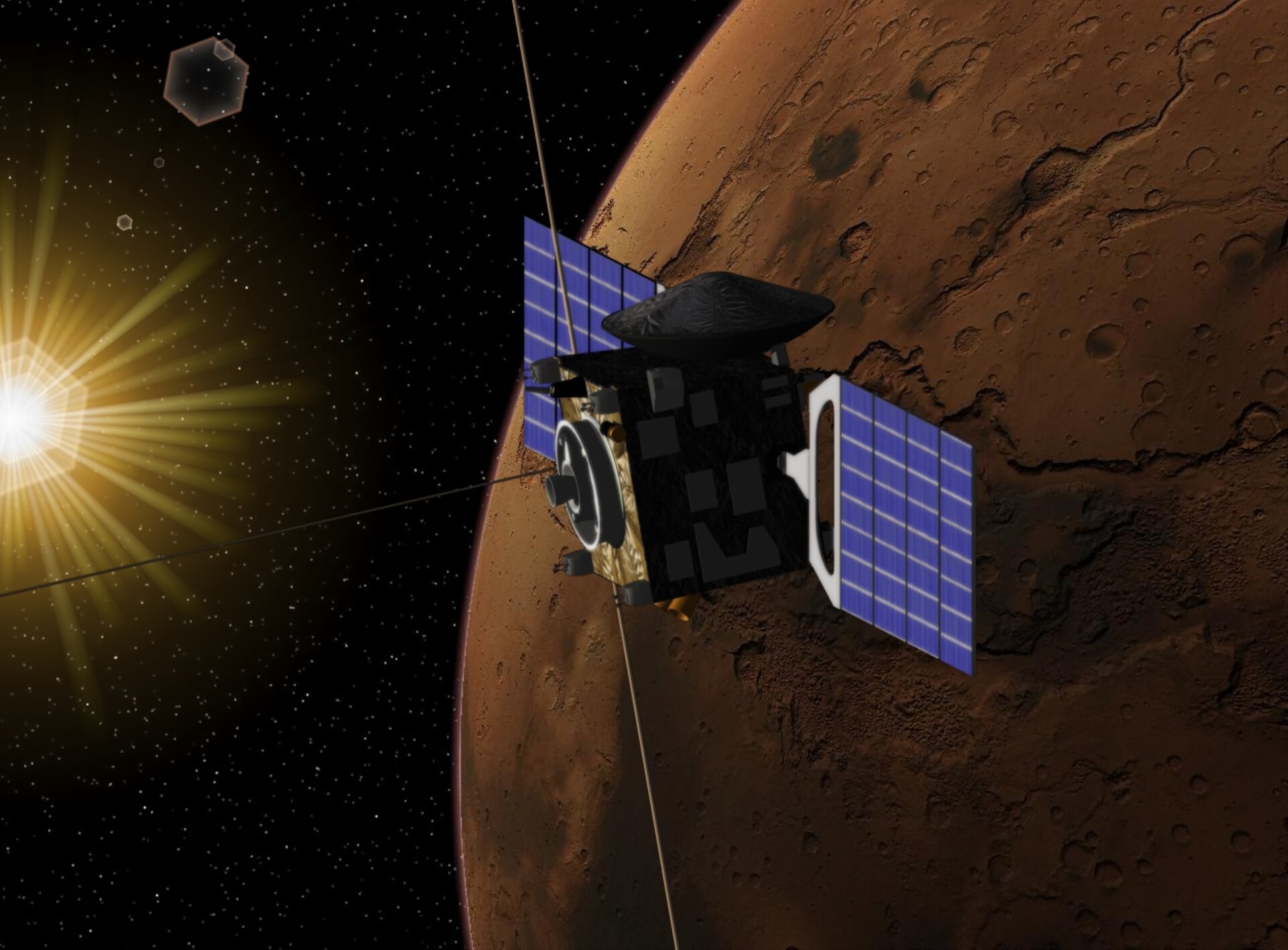 In the past weeks, Mars Express faced an unusually demanding solar eclipse season running from end-August until late September. Eclipses are caused by the natural movements of the Earth and Mars - and Mars Express - around the Sun. During this period, the spacecraft spent as long as 75 minutes hidden from the Sun during each approximately 6-hour-long orbit about the Red Planet. During these 'blackouts', the solar panels generated no power and the spacecraft ran on battery power alone.

In an eclipse, three lithium-ion batteries previously charged by the solar panels provide power to the spacecraft's on-board scientific instruments and flight systems. The batteries can normally provide more than enough power if they have been fully charged.

However, an anomaly identified shortly after the mission's 2 June 2003 launch limits the amount of electricity produced by the panels that can be delivered to the rest of the spacecraft, including the batteries. As a result, mission controllers realised early on that the batteries might not fully recharge after each lengthy blackout during the recent eclipse season, with the ultimate result that the spacecraft might loose all power.

Mars Express has already come through several eclipse seasons, but the current one happens to coincide with the spacecraft being at aphelion, the point in its orbit lying the farthest from the Sun. As a result, the power available from the solar arrays drops by a further 20 percent.

"This was potentially critical, and we knew we had to devise a solution that wasn't in the manual," said Michel Denis, Spacecraft Operations Manager based at ESOC, ESA's Space Operations Centre, in Darmstadt, Germany.

Denis says the solution was found by devising a configuration, or mode, for the spacecraft in which all but the most essential on-board devices were switched off or powered down. Further, to collect all possible power-producing energy from the Sun, the spacecraft would have to be turned away from the Earth most of the time, resulting in very short communication sessions with controllers on the ground.

As this way of operating was not envisioned when Mars Express was built, ESOC mission controllers and technical specialists went back to the mission procedure guides and original manufacturer's documents to run a full engineering review of the spacecraft's hardware and software, seeking to save every last watt of electricity.

The Mars Express prime contractor, Astrium, in Toulouse, France, worked closely with ESA, providing detailed information and conducting a parallel study to cross-check and verify the ESOC team's findings. Principal investigators and scientists also contributed, verifying how and under what circumstances the mission's instruments - there are seven - could be successfully powered down and stored at low temperatures.

'Sumo' mode wrestles with the problem

The intensive engineering review, started in 2005, took months of detailed planning and forecasting. The review was far more complex than merely summing the wattage of various devices and then turning off those that would bring the greatest energy saving.

Some components, for example, gain stability due to the heat emitted by nearby devices. If engineers tried to save power by turning those heat-emitting devices off, it would be necessary to turn on heaters to prevent other components from permanently freezing up, thus using even more electricity.

"We created Sumo mode from scratch, and it is a careful balance based on the total energy consumption tally that would enable Mars Express to survive," says Denis.

Sumo mode included turning off all science instruments, as well as powering down systems including communications and transmitter, data handling, on-board memory (not needed if instruments wouldn't be collecting data), the solar array motor and several heaters and thermal systems.

By May 2006, mission controllers had found what proved to be the right configuration.

A series of tests and validations as well as a formal review by ESA determined that Sumo mode would reduce on-board power consumption from 400 to around 300 watts, a figure later verified in actual use, and low enough for the batteries to be adequately recharged after each eclipse.

With teams of engineers pulling extended day and night shifts in the mission's dedicated control room, Mars Express was switched to the innovative Sumo mode on 23 August this year. The spacecraft's orbit caused it to start experiencing increasing periods of blackout on 29 August, and the height of eclipse season was reached on 9 September, when the orbital blackouts lasted up to 75 minutes.

The extra-long eclipse season ended on 17 September and Mars Express has emerged with all systems nominal, thanks to close teamwork and some engineering innovation.

There are other benefits as well. "We've learned a lot about power management and we can apply these lessons not only to Mars Express during the rest of the mission but also to other missions," said Denis, adding, "For future eclipses, we are now even stronger."