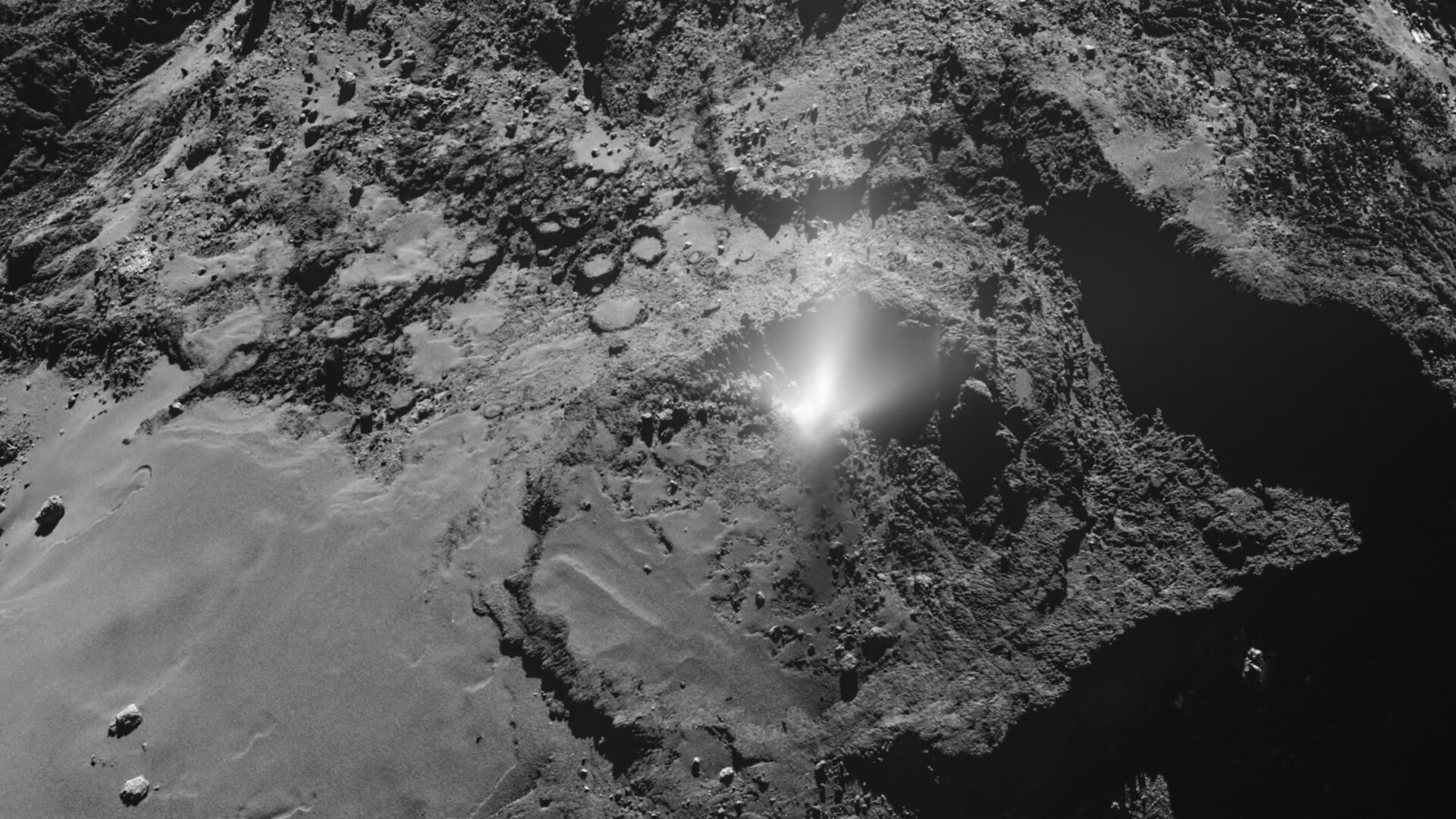 Last year, a fountain of dust was spotted streaming from Rosetta’s comet, prompting the question: how was it powered? Scientists now suggest the outburst was driven from inside the comet, perhaps released from ancient gas vents or pockets of hidden ice.

The plume was seen by ESA’s Rosetta spacecraft on 3 July 2016, just a few months before the end of the mission and as Comet 67P/Churyumov–Gerasimenko was heading away from the Sun at a distance of almost 500 million km.

“We saw a bright plume of dust blowing away from the surface like a fountain,” explains Jessica Agarwal of the Max Planck Institute for Solar System Research in Göttingen, Germany, and lead author of the new paper.

“It lasted for roughly an hour, producing around 18 kg of dust every second.”

Alongside a steep increase in the number of dust particles flowing from the comet, Rosetta also detected tiny grains of water-ice.

The images showed the location of the outburst: a 10 m-high wall around a circular dip in the surface.

Previous plumes, collapsing cliffs and similar features have been seen on the comet, but spotting this one was especially fortunate: as well as imaging the location in detail, Rosetta also sampled the ejected material itself.

“This plume was really special. We have great data from five different instruments on how the surface changed and on the ejected material because Rosetta was, by chance, flying through the plume and looking at the right part of the surface when it happened,” adds Jessica.

“Rosetta hasn’t provided such detailed and comprehensive coverage of an event like this before.”

Initially, scientists thought that the plume might have been surface ice evaporating in the sunlight. However, Rosetta’s measurements showed there had to be something more energetic going on to fling that amount of dust into space.

“Energy must have been released from beneath the surface to power it,” says Jessica. “There are evidently processes in comets that we do not yet fully understand.”

How such energy was released remains unclear. Perhaps it was pressurised gas bubbles rising through underground cavities and bursting free via ancient vents, or stores of ice reacting violently when exposed to sunlight.

“One of Rosetta’s major goals was to understand how a comet works. For example, how does its gaseous envelope form and change over time?” says Matt Taylor, ESA’s Rosetta project scientist.

“Outbursts are interesting because of this, but we weren’t able to predict when or where they would occur – we had to be lucky to capture them.

“Having full, multi-instrument coverage of an outburst like this and its effect on the surface is really valuable for revealing how these events are driven.

“Rosetta scientists are now combining measurements from the comet with computer simulations and laboratory work to find out what drives such plumes on comets.”

“Evidence of sub-surface energy storage in comet 67P from the outburst of 3 July 2016,” by J. Agarwal et al. is accepted for publication in Monthly Notices of the Royal Astronomical Society.