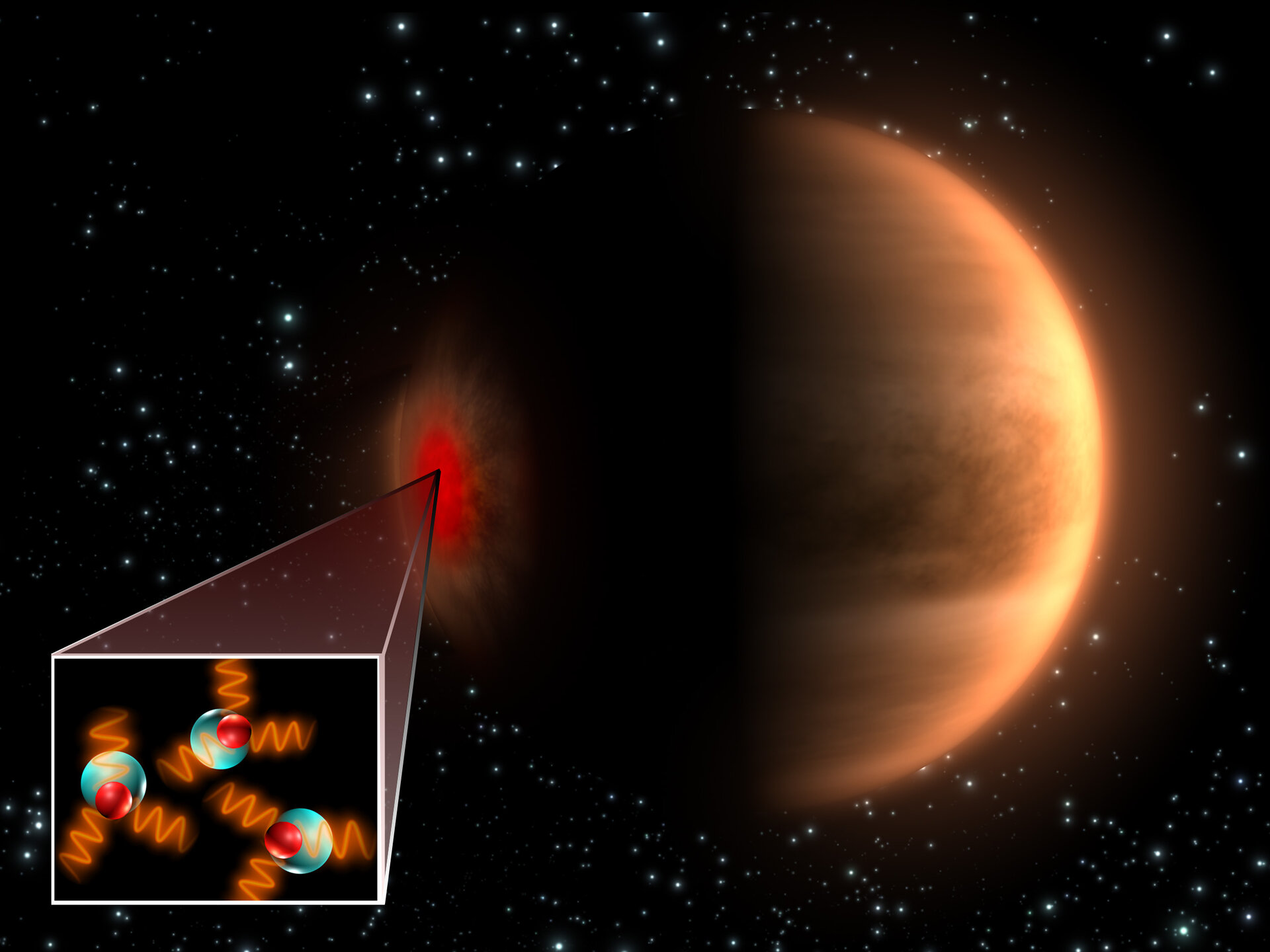 Venus Express has detected the molecule hydroxyl on another planet for the first time. This detection gives scientists an important new tool to unlock the workings of Venus’s dense atmosphere.

Hydroxyl, an important but difficult-to-detect molecule, is made up of a hydrogen and oxygen atom each. It has been found in the upper reaches of the Venusian atmosphere, some 100 km above the surface, by Venus Express’s Visible and Infrared Thermal Imaging Spectrometer, VIRTIS.

The elusive molecule was detected by turning the spacecraft away from the planet and looking along the faintly visible layer of atmosphere surrounding the planet’s disc. The instrument detected the hydroxyl molecules by measuring the amount of infrared light that they give off.

The band of atmosphere in which the glowing hydroxyl molecules are located is very narrow; it is only about 10 km wide. By looking at the limb of the planet, Venus Express looked along this faint atmospheric layer, increasing the signal strength by about 50.

Hydroxyl is thought to be important for any planet’s atmosphere because it is highly reactive. On Earth it has a key role in purging pollutants from the atmosphere and is thought to help stabilise the carbon dioxide in the martian atmosphere, preventing it from converting to carbon monoxide. On Mars it is also thought to play a vital role in sterilising the soil, making the top layers hostile to microbial life.

The reactive molecule has been seen around comets, but the method of production there is thought to be completely different from the way it forms in planetary atmospheres.

“Because the venusian atmosphere had not been studied extensively before Venus Express arrived on the scene, we have not been able to confirm much of what our models tell us by observing what is actually happening. This detection will help us refine our models and learn much more,” says one of the Principal Investigators of the VIRTIS experiment, Giuseppe Piccioni, from the Istituto di Astrofisica Spaziale e Fisica Cosmica in Rome, Italy.

On Earth, the glow of hydroxyl in the atmosphere has been shown to be closely linked to the abundance of ozone. From this study, the same is thought to be true at Venus. Now, scientists can set about estimating the amount of ozone in the planet’s atmosphere.

Venus Express has shown that the amount of hydroxyl at Venus is highly variable. It can change by 50% from one orbit to the next and this may be caused by differing amounts of ozone in the atmosphere.

Venus Express has already shown us that Venus is much more Earth-like than once thought. The detection of hydroxyl brings it a step closer

“Ozone is an important molecule for any atmosphere, because it is a strong absorber of ultraviolet radiation from the Sun,” says Piccioni. The amount of the radiation absorbed is a key parameter driving the heating and dynamics of a planet’s atmosphere. On Earth, it heats the stratosphere (layer of the atmosphere) making it stable and protecting the biosphere from harmful ultraviolet rays.

Computer models will now be able to tell how this jump and drop in ozone levels over short intervals affects the restless atmosphere of that world.

“Venus Express has already shown us that Venus is much more Earth-like than once thought. The detection of hydroxyl brings it a step closer,” says Piccioni.

He and his colleagues are only reporting the initial detection from a few orbits in their latest paper. They are working on the analysis of data from about 50 other orbits and more observations will follow.

First detection of hydroxyl in the atmosphere of Venus by G. Piccioni et al. has been published in today's issue of Astronomy & Astrophysics Letters.