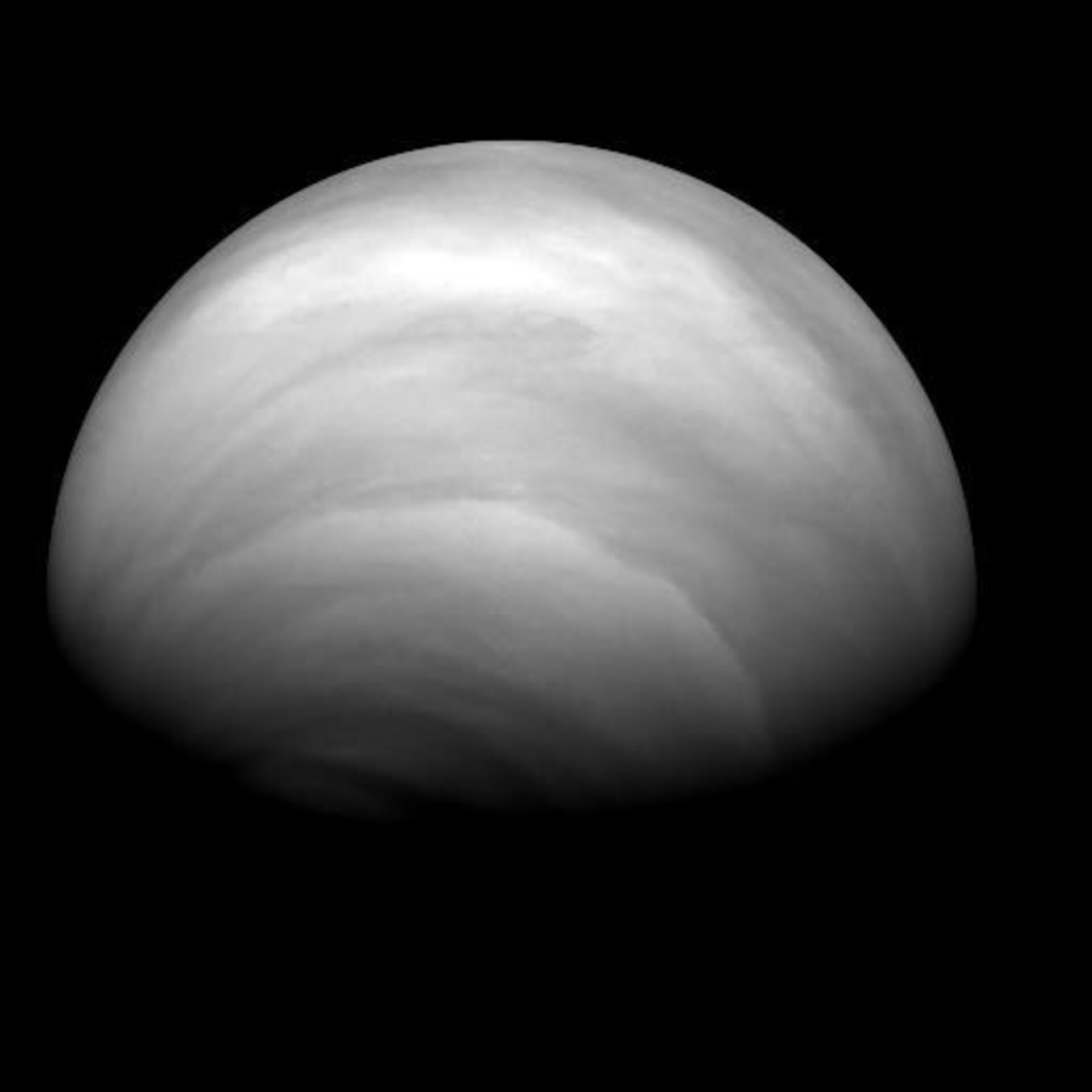 Venus Express has revealed a planet of extraordinarily changeable and extremely large-scale weather. Bright hazes appear in a matter of days, reaching from the south pole to the low southern latitudes and disappearing just as quickly. Such ‘global weather’, unlike anything on Earth, has given scientists a new mystery to solve.

The cloud-covered world of Venus is all but a featureless, unchangeable globe at visible wavelengths of light. Switch to the ultraviolet and it reveals a truly dynamic nature. Transient dark and bright markings stripe the planet, indicating regions where solar ultraviolet radiation is absorbed or reflected, respectively.

Venus Express watches the behaviour of the planet’s atmosphere with its Venus Monitoring Camera (VMC). It has seen some amazing things. In July 2007, VMC captured a series of images showing the development of the bright southern haze. Within days, the high-altitude veil continually brightened and dimmed, moving towards equatorial latitudes and back towards the pole again.

Such global weather suggests that fast dynamical, chemical and microphysical processes are at work on the planet. During these episodes, the brightness of the southern polar latitudes increased by about a third and faded just as quickly, as sulphuric acid particles coagulate.

“This bright haze layer is made of sulphuric acid,” says Dmitri Titov, VMC Co-Investigator and Venus Express Science Coordinator, Max Planck Institute for Solar System Research, Germany. That composition suggests the existence of a formation process to the VMC team.

At an altitude of about 70 km and below, Venus’s carbon dioxide-rich atmosphere contains small amounts of water vapour and gaseous sulphur dioxide. These are usually buried in the cloud layer that blocks our view of the surface at visible wavelengths.

However, if some atmospheric process lifts these molecules high up above the cloud tops, they are exposed to solar ultraviolet radiation. This breaks the molecules, making them highly reactive. The fragments find each other and combine quickly to form sulphuric acid particles, creating the haze.

“The process is a bit similar to what happens with urban smog over cities,” says Titov. With over 600 orbits completed, the VMC team now plan to look for repeating patterns of behaviour in the build-up and decrease of the haze layer.

What causes the water vapour and sulphur dioxide to well up in the first place? The team does not know yet. Titov says that it is probably an internal dynamical process in the planet’s atmosphere. Also, the influence of solar activity on haze formation has not been completely ruled out.

When the team have worked out what causes the hazes and their vigorous dynamics, there is still another problem waiting to be solved. The dark markings on these images are one of the biggest remaining mysteries of Venus’s atmosphere. They are caused by some chemical species, absorbing solar ultraviolet radiation. However, as yet, planetary scientists do not know the identity of the chemical. Now that they can spot these dark patches quickly with VMC, the team hopes to use another Venus Express instrument, VIRTIS, to pinpoint the exact chemical composition of these regions.