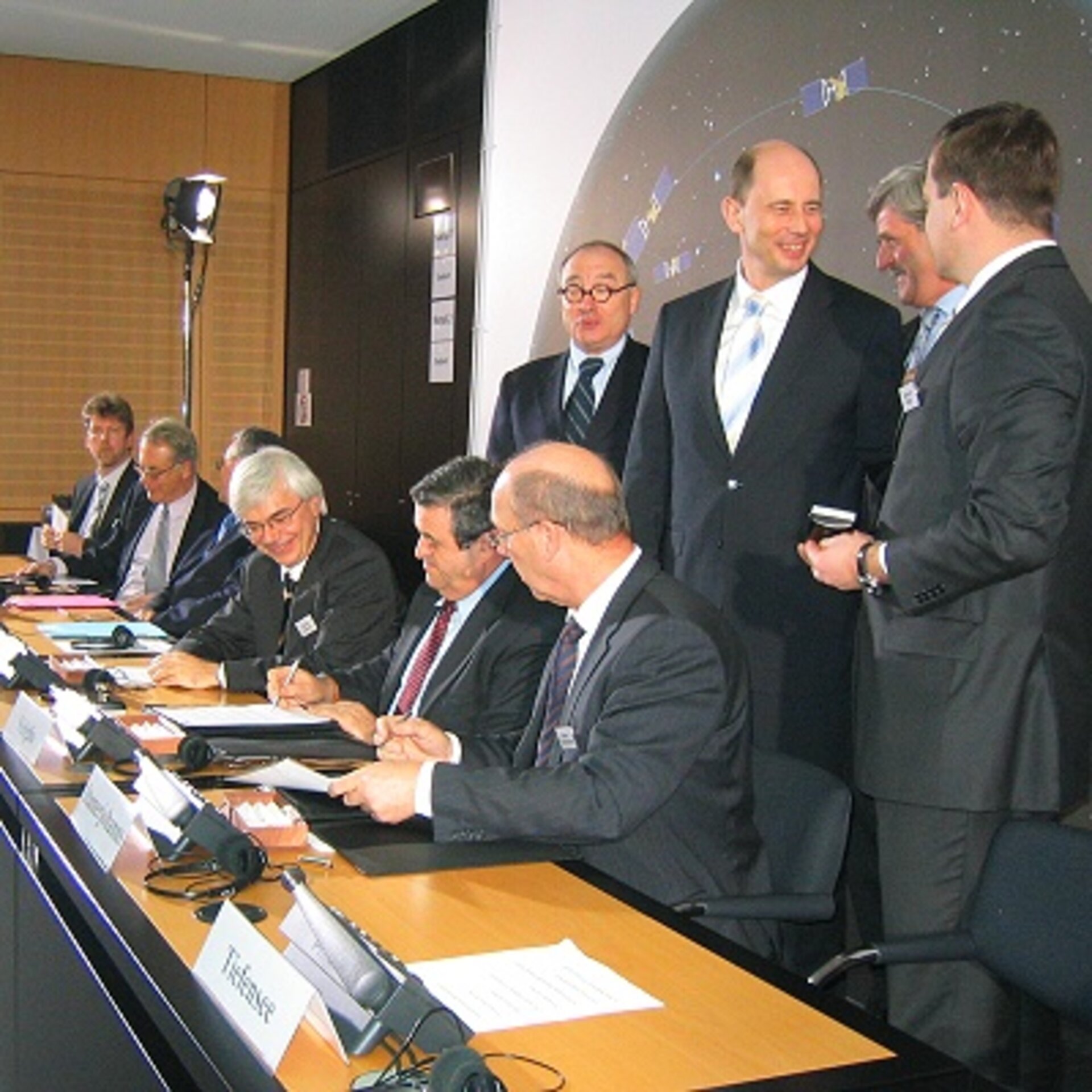 On Thursday 19 January 2006, the European Space Agency and Galileo Industries GmbH signed a € 950 million contract for the development and construction of the first four satellites of the Galileo navigation system and their associated ground systems.

ESA’s Director General, in his address at the signing ceremony, said “With this contract, we are translating a great European project into a mini-constellation of four satellites backed by an extensive network of ground stations, providing solid grounds upon which the concessionaire will develop the full operational Galileo constellation.”

Four satellites are the minimum required to provide precision positioning and synchronisation over the selected show-case sites.

“For Germany, Galileo is one of the most important projects today.” the German Federal Minister of Transport told the attendees, explaining that “satellite navigation will offer absolutely infinite possibilities for use.”

Mr Günter Stamerjohanns, Chief Executive Officer of Galileo Industries, added that “with the signature of this contract a very important milestone in view of the completion of this unique European technology programme will be reached.”

Following the preliminary authorisation to proceed with € 150 million of work, signed on 21 December 2004, it is now the overall in-orbit validation contract that is going ahead, drawing on ESA and EU funds accessible under the GalileoSat programme. The satellite launch contracts will be negotiated during the course of 2006.

The in-orbit validation phase is already well under way, with GIOVE-A, the first demonstrator satellite, launched on 28 December 2005 from the Baikonur cosmodrome aboard a Soyuz rocket. GIOVE-A transmitted its first navigation signals on 12 January 2006. To make sure that the initial IOV activities could be completed within the required timeframe, two demonstrator satellites were ordered from European industry.

The second satellite, GIOVE-B, is undergoing final integration and testing at the Rome facilities of Alcatel Alenia Space, prior to moving to the European Space Research and Technology Centre (ESTEC) for its environmental test campaign. It is scheduled to be launched later in 2006.

A joint ESA/EU initiative, Galileo will be the first global navigation satellite system geared to the needs of civilian users and offering the enhanced accuracy and reliability and the continuity of service required by modern applications.

Following in-orbit validation, the full deployment phase of Galileo will cover the manufacture and launch of the remaining 26 satellites plus the completion of the ground segment comprising a worldwide network of stations and service centres.