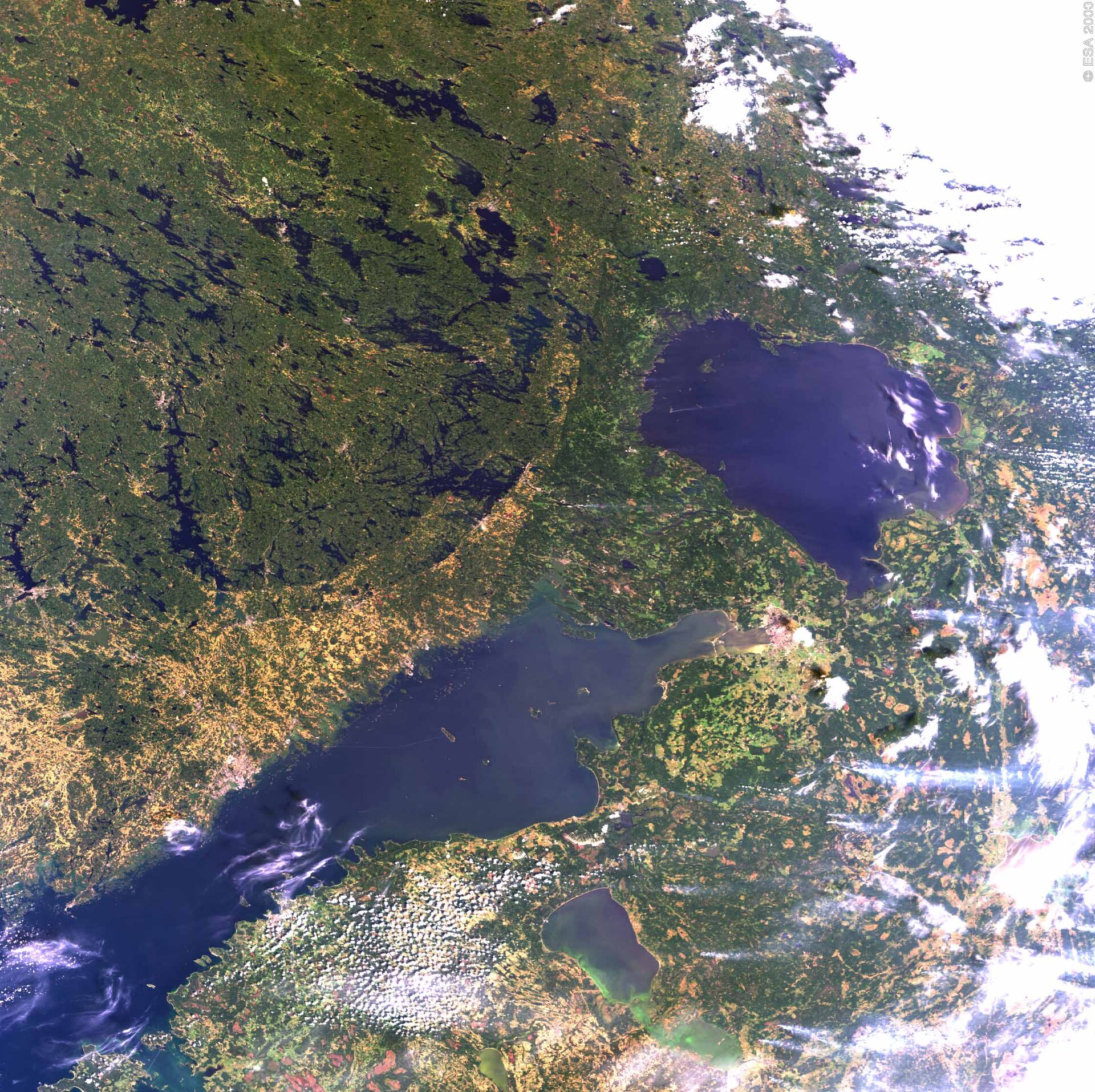 This Envisat image shows the major Russian city of St. Petersburg, located at the eastern end of the Gulf of Finland, and beside it the blue waters of Lake Ladoga, Europe's largest freshwater body.

St. Petersburg (formerly Leningrad) is Russia's second city, with a population of around 4.7 million. It is located on the delta of the Neva River and its centre can be noted in the image as a cream-pink area on the eastern extremity of the Gulf of Finland, standing out from the surrounding green.

Often referred to as the 'Venice of the North', the city centre dates back to 1703 and was built by Tsar Peter the Great. St. Petersburg is today a UNESCO World Heritage Site. Looking at the city in detail the bridges that connect the island naval base of Kronstadt to the mainland can be seen.

To the east of the city is the 17 600 square km area Lake Ladoga (Ladozhskoye Ozero), one of the 15 largest freshwater reservoirs in the world. It is approximately 210 km long and 130 km wide with a maximum depth of 225 metres.

Originally of glacial origin, Lake Ladoga is the main source of drinking water for the inhabitants of St. Petersburg. Some 32 rivers flow into the Lake and only one – the Neva – flows out.

The Lake has rich and varied plant and animal life and is the sole home of the critically endangered Lake Ladoga ringed seal, a subspecies adapted to freshwater.

However run-off from agriculture and industry has polluted the Lake waters during recent decades, leading to an increasing incidence of 'eutrophication' where fertiliser chemicals and eroded soil encourage runaway algae growth that uses up available oxygen.

Further to the west of the image can be seen the cities of Helsinki and Tallinn, the capitals of Finland and Estonia respectively. Helsinki is the pinkish mass about two-thirds of the way west along the northern coast of the Gulf of Finland, while Estonia faces it on the other coast.

To the north of the images we can see the densely forested regions of northern Russia and Finland, interspersed by lakes and smaller towns. One interesting point is that the border between Russia and Finland can be clearly seen even from space.

Look north from the eastern side of the Gulf of Finland and the Russian side of the border is appreciably greener. In Finland most old-growth forest has been clear-cut and transformed into coniferous plantations, but during the Soviet era all access to the Russian border was strictly controlled. The inadvertent result was to preserve a 'green belt' in this area, even as old-growth forests elsewhere in the country were cut down.

Envisat's Medium Resolution Imaging Spectrometer (MERIS) acquired this image on 19 August 2002, working in Full Resolution Mode to supply a spatial resolution of 300 metres. It covers an area of 672 by 670 km.