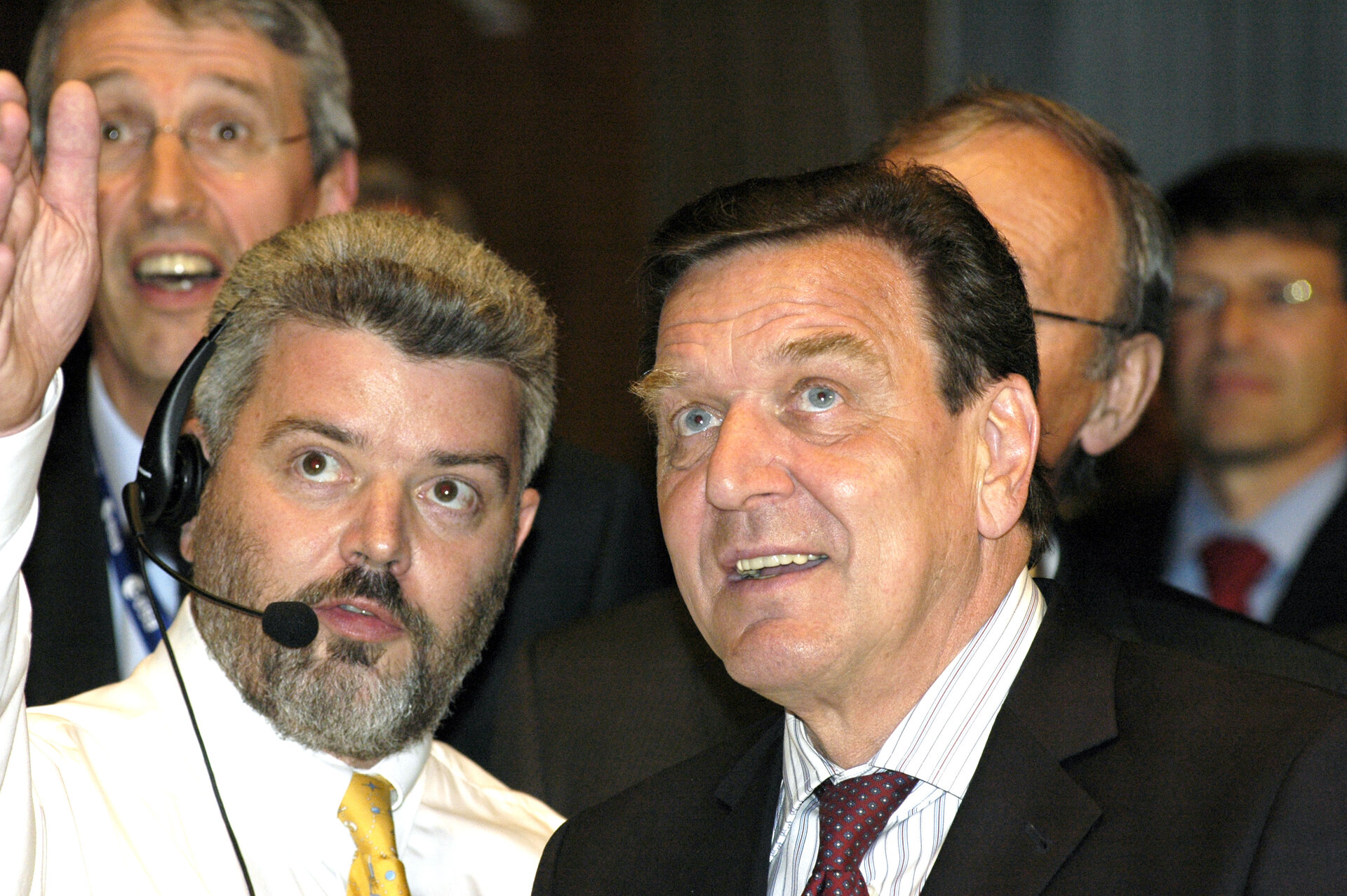 Today saw the first-ever visit of the German Chancellor to ESA's Space Operations Centre in Darmstadt, Germany, to mark the 30th anniversary of ESA's charter and congratulate the Agency on recent space successes.

Chancellor Gerhard Schröder was welcomed by ESA Director General Jean-Jacques Dordain, who accompanied him on a walking tour of ESOC's Main Control Room and other operational areas. He was briefed on science results recently returned from ESA spacecraft controlled from Darmstadt.

These include the Cassini-Huygens and Mars Express deep-space missions, which travelled to Saturn's moon Titan and the Red Planet Mars, respectively, and the Envisat Earth Observation satellite, ESA's flagship environmental, climate and natural disaster monitoring mission.

He was also briefed on the upcoming Cryosat mission, designed to precisely measure continental and oceanic ice thickness in order to provide direct answers to questions related to melting ice caps and global warming.

As the second-largest contributor to ESA's budget, the visit highlights Germany's strong support for ESA over the past three decades and the continuing deep involvement in ESA activities of DLR, the country's national space agency, as well as German industry. The Chancellor also saw robotic hardware developed for ESA by German high-tech firms.

In the Control Room, the Chancellor helped flight controllers perform a live deployment simulation of the 40-metre-long MARSIS (Mars Express Sub-Surface Sounding Radar Altimeter) boom antenna onboard Mars Express. The MARSIS instrument is expected to play a key role in confirming the presence of water below the Martian surface.

He was presented with an honorary 'Satellite Controller' certificate as a souvenir of his visit and involvement.

Later, Chancellor Schröder addressed an audience including ESA DG Dordain, Gaele Winters, ESA Director of Operations and Infrastructure, Dr Alois Rhiel, Economics Minister for the state of Hessen, Sigmar Wittig of DLR, and over three hundred distinguished guests from industry, science and government as well as ESOC staff and media.

In his remarks, following the theme of 'Space — The Key Technology for the 21st Century', Chancellor Schröder said:

"Space voyages and exploration have always exercised an enormous fascination on mankind. I have clearly seen this fascination and a solid self-confidence among the European ESA teams in Darmstadt. This is an excellent attitude, I believe. Therefore, I would like to congratulate you for 30 years of successful ESA work.

The outstanding science and technology of ESA and its German partners also acts as a motor for European innovation across the globe. Complex ESA programmes like Envisat for Earth observation and the future navigation system Galileo are a clear expression of the fact that Europe should and does take an international technological leadership role in space and beyond. I am also proud of this."

"Thirty years of ESA means thirty years of success," said Mr. Dordain. "Every single European citizen profits from space, whether from global telecommunications, weather forecasting or climate monitoring. We are the only agency simultaneously orbiting the Earth, orbiting Mars, orbiting the Moon and flying after comets. We will be judged in 10 or 20 years on the technological investments we make today."

The Chancellor is the third German cabinet member to visit ESOC in the past six months.

During the landing of ESA's Huygens probe on Saturn's moon Titan on 14 January, Edelgard Bulmahn, federal Minister for Education and Research, was in attendance in the Main Control Room. And on 22 March, German Environment Minister Juergen Trittin visited to receive a briefing on the latest Envisat Earth Observation results.