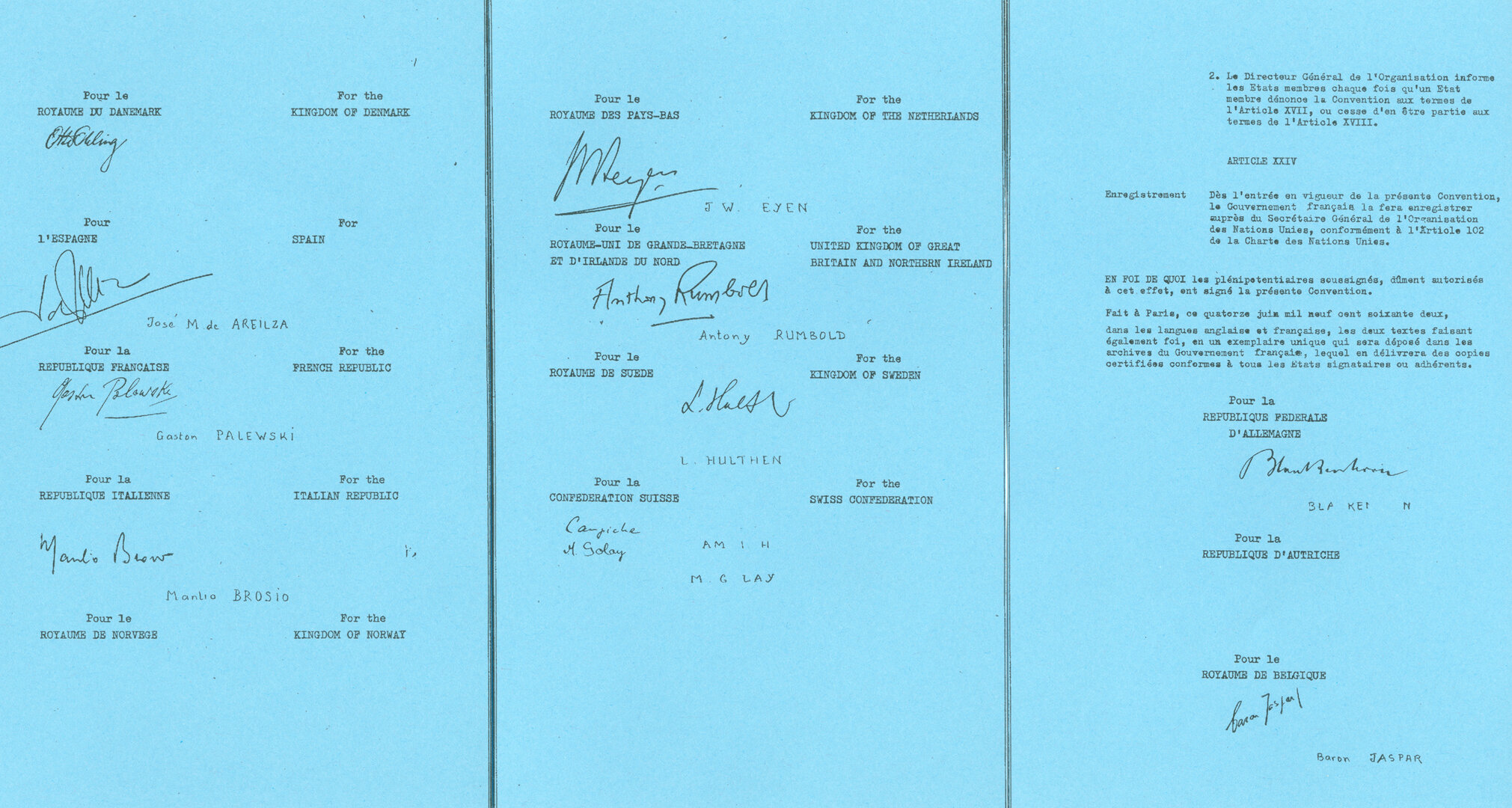 On 14 June 1962, ten European nations founded an international organisation with the intention of jointly pursuing scientific research in space.

In Paris on that day, Belgium, Denmark, France, Germany, Italy, the Netherlands, Spain, Sweden, Switzerland and the United Kingdom signed the Convention creating the European Space Research Organisation (ESRO). Two other countries that were originally engaged in the deliberations over the formation of ESRO, Austria and Norway, retained observer status.

The road to a joint European space effort had started some years earlier, with initiatives taken in 1959 by a small group of scientists led by two scientific statesmen, the Italian Edoardo Amaldi and the Frenchman Pierre Auger. Amaldi and Auger had been key actors in the process of setting up of CERN, the European organisation for nuclear research.

In the 1960s, they turned their attention to space and success was rapid. Within a year of their first discussions, European governments had set up a European Preparatory Commission for Space Research (COPERS) to explore the possibilities for a joint space research effort.

COPERS held its first session in Paris in March 1961. Its first task was to define the scientific programme and the necessary infrastructure of the envisaged organisation, to draw up its budget, and to prepare a Convention for signature by those Member State governments who wished to join it.

It established two working groups, the first being the Interim Scientific and Technical Working Group (STWG), with the task of prepare the scientific programme for the future space organisation, paying particular attention to the technical and financial implications of its proposals. Lamek Hulthén (SE) was nominated chairman of this group, with Reimar Lüst (DE) as coordinating secretary. The second group was the Legal, Administrative and Financial Working Group headed by Alexander Hocker (DE), the chairman of the CERN Finance Committee.

By the third COPERS meeting in October 1961, the STWG had prepared a 77-page document outlining the future ‘European space research organisation’. In five parts, the so-called ‘Blue Book’ covered an outline of ESRO, a scientific programme, its technology centre, its data handling, and ranges and vehicles.

In London, on 29 March 1962, Belgium, France, Germany, Italy, the Netherlands, the United Kingdom and Australia (associate member) signed the Convention creating the European Launcher Development Organisation. On 14 June, COPERS laid the draft ESRO Convention before an intergovernmental conference in Paris. This was ratified on 20 March 1964, now celebrated as the official birthdate of ESRO. Pierre Auger was appointed ESRO’s first Director General.

When ESRO’s Convention was first drafted no specific provision was made to distribute industrial contracts on a geographical basis. The document was modelled on CERN’s, in which major contracts were awarded competitively, i.e. the successful bidder was the one who made the lowest offer satisfying the laboratory’s technical and delivery requirements.

It was Austria that suggested to COPERS that some attempt be made to ensure all Member States had a guaranteed return from the European space effort. Consequently, the ESRO Convention of June 1962 stated that ‘the organisation shall place orders for equipment and industrial contracts amongst member states as equitably as possible, taking into account scientific, technological, economic and geographical considerations’.

The principle of distributing contracts on some geographical basis was thus established, though it was not clear how to interpret it. Indeed, the principle of fair return, or ‘juste retour’, was the subject of considerable discussion in the Administrative and Finance Committee for the first three years of ESRO’s existence.

The convention eventually establishing ESA in 1975 was the outcome of two successive revisions to this ESRO Convention, including this fundamental principle which has helped to meet one of the major objectives of ESA: to build a competitive European space industry.