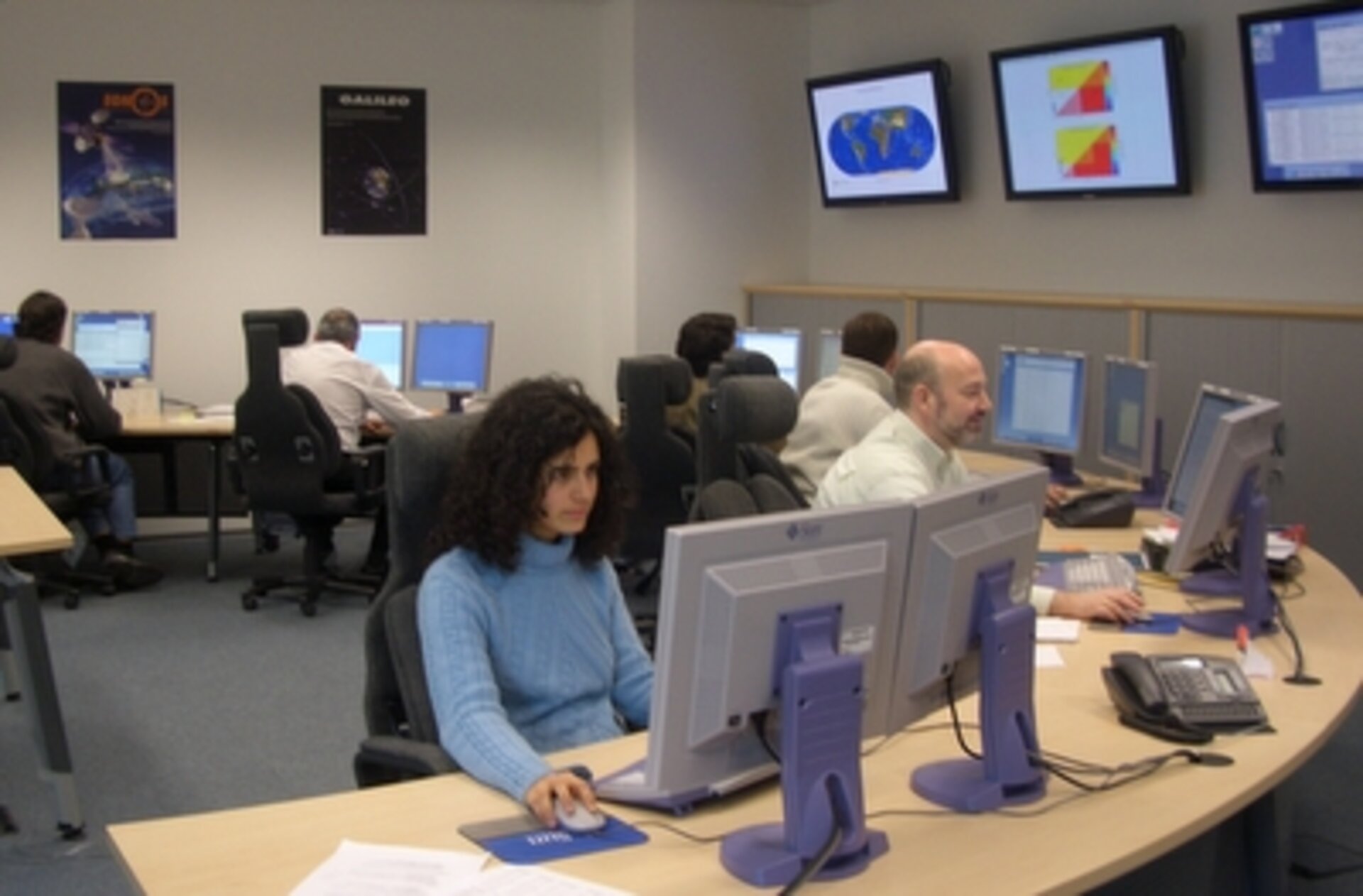 In full operation since February 2006, ESA's Navigation Facility, located at ESOC, the European Space Operations Centre, is producing a growing series of processed data products providing some of the world's most accurate orbit and clock calculations related to GNSS, or global navigation satellite systems.

The facility is directly connected to a network of 44 GPS signal receivers located worldwide, and can receive data from several hundred others.

These receivers monitor signals from GPS satellites and relay them to just a handful of highly specialised processing centres, including ESOC's Navigation Facility. These in turn process the raw data into valuable atmospheric and geoscience information sets.

The Navigation Facility's cornerstone geoscience service consists of calculating and predicting GPS satellite orbits in near real-time every three hours.

The main focus now is on GPS data processing. Once Galileo data become available, that will be a major boost to what we can do.

This enhanced data can then be used to boost the accuracy of the original location data sent by the satellites, leading to enhanced GNSS applications for scientific studies, climate monitoring and tracking large-scale, long-term changes in the Earth's geology.

IGS analysis centres, which include ESOC, Germany's GeoForschungsZentrum (GFZ) and the University of Bern, among others, make their processed data sets available to a growing user community, including national weather offices, satellite operators, universities, geoscience institutes and researchers worldwide.

ESOC's ongoing efforts have been coordinated by Prof. John Dow, head of the Navigation Support Office, which is part of ESA's Operations directorate.

The facility inherits and consolidates ESOC's experience as one of the best producers of high-precision GPS orbit and clock offset data, and is now enabling a new series of geo computational services to be developed for an expanding list of customers.

One of the facility's most challenging services will enable the new EUMETSAT (the European Organisation for the Exploitation of Meteorological Satellite) MetOp-series of weather satellites to perform 'atmospheric sounding' experiments.

Atmospheric sounding makes use of processed GNSS data sets to correct GPS radio signals received by a specially adapted receiver mounted on the satellite. Since the atmosphere affects the signal, it can be processed to extract valuable data on the ionosphere and troposphere, including the concentration of charged ions and physical measurements like temperature, pressure and humidity. Weather forecasters can also use such studies to track atmospheric and climate change over time.

The Navigation facility is also developing new services in support of Europe's Galileo project. These include providing data validation services, helping define the fundamental geographic reference frame and setting up a network of ground-based Galileo signal receivers on behalf of Galileo Industries, the consortium of industrial partners building the system.

Finally, the navigation Facility is monitoring and validating data handled by the EGNOS (European Geostationary Navigation Overlay Service) system. EGNOS is a predecessor service for Galileo, and provides augmented and enhanced data from both GPS and (later) GLONASS satellites. This boost makes these systems' data suitable for safety critical applications such as flying aircraft and navigating ships through narrow channels.

Ready for the future

It made sense to build the Navigat- ion Facility and consolidate a number of third-party revenue-generating projects.

With ongoing upgrades, the facility will be capable of providing real-time orbit-and-time-correction data sets by the end of 2006, which will enable an even wider range of products and services.

"It made sense to build the Navigation Facility and consolidate a number of third-party revenue-generating projects. We gave it a lot of thought. It was clear that many activities were going to continue and grow," says Prof. Dow.

He says the future will see more customers interested in multi-GNSS solutions, ultra-high-accuracy processed data sets that integrate source data from more than one satellite system, such as Galileo and GLONASS, or GPS and GLONASS.

"The main focus now is on GPS data processing. Once Galileo data become available, that will be a major boost to what we can do."