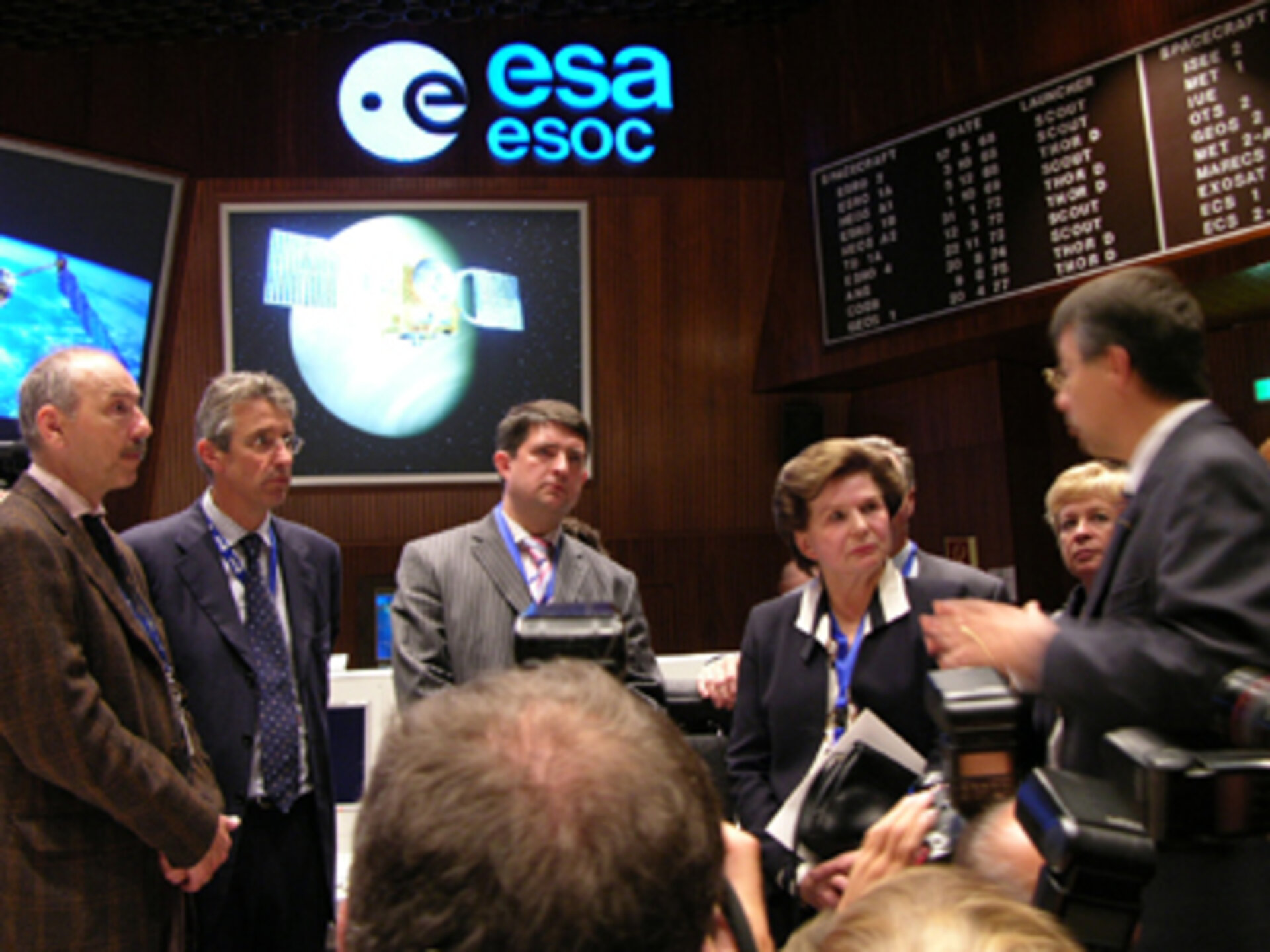 The ex-cosmonaut visited ESOC while in Germany as part of an inter-governmental delegation from Russia's Jaroslavl region, located 200 km northeast of Moscow. Jaroslavl is an official partner state of the German region of Hessen, home to ESOC. The delegation was headed by Mr Anatolij Lissizyn, Governor of Jaroslavl.

The visitors were welcomed by ESA Director of Operations, Mr Gaele Winters, who briefed them on international cooperation at ESA, which includes growing activities with the space agencies of Russia, France, Japan and the USA, among others. After receiving Observation missions, including Rosetta, SMART-1, Mars Express and Envisat, Ms Tereshkova toured ESOC's mission control facilities and Main Control Room.

Her visit comes on the eve of the 26 October launch of ESA's Venus Express spacecraft from the Russian Baikonur Cosmodrome in Kazakhstan — the same launch point for Tereshkova's Vostok 6 launch in the predawn darkness of 16 June 1963. General Nicolas Kamanine, the then Deputy Chief of Staff of the Soviet Air Force, said of the talented, then-26-year-old astronaut: "Tereshkova is our female Gagarin".

"I wish the best of success for the Venus Express launch," said Ms Tereshkova. She asked many questions on ESOC's activities and ESA programmes, adding "I am impressed with the continuing cooperation between the Russian space agency and ESA, and hope to see a deeper relationship in the future."

Upon completion of her 70.8-hour mission in 1963, Tereshkova was named Hero of the Soviet Union; among many other honours in East and West she was also later awarded the United Nations Gold Medal of Peace.

She studied at the Zhukovskiy Military Air Academy from 1964 to 1969; after graduation, she left the space programme and became a well-known member of the Communist Party, holding a series of formal posts and representing the Soviet government at numerous women's organisations and events. She later became a member of the party's Central Committee and was given an honorary commission in the Soviet Air Force; she retired with the rank of major-general.

In 1994, the Russian government appointed her head of Russia's Centre for International Scientific and Cultural Cooperation, and in 2000 she was named "Woman of the Century" by the International Women of the Year Association.

From farm to outer space

Valentina Tereshkova was born in the Jaroslavl region on 6 March 1937, the second of three children. Her tractor-driver father died in World War II and in 1953, after leaving school, she worked at a textile mill. She became interested in aviation and was an avid parachutist at a local aero club; this led to her being selected from among hundreds of applicants to train as a cosmonaut.

In November 1963, she married fellow cosmonaut Andrian Nikolayev. Their first child, daughter Yelena (Elena), was the subject of keen medical interest as she was the first child born to parents that had both travelled in space. Yelena later became a medical doctor and now has children of her own. Tereshkova and Nikolayev divorced in 1980 and Tereshkova's second husband, Dr Juri Shaposhnikov, died in 1999.

The former cosmonaut's visit to ESOC underscores the long-standing cooperation between ESA and Russian private and governmental space organisations and institutes. ESA's Permanent Mission to Russia, which was established in 1995, has diplomatic status and is registered with the Ministry of Foreign Affairs.

Over the years, cooperation between ESA and Russia has strengthened and widened; Russia participates in various ESA projects (human space flight, launcher technology, telecom, navigation). In particular, ESA has used Russia's launch facilities for a number of its missions and is planning to have Soyuz rockets lift-off from Europe's Spaceport in Kourou within the next few years.

ESA's Venus Express spacecraft is to be launched on a Soyuz-Fregat launcher from the Baikonur Cosmodrome on Wednesday, 26 October, at 06:43 CEST (04:43 GMT).