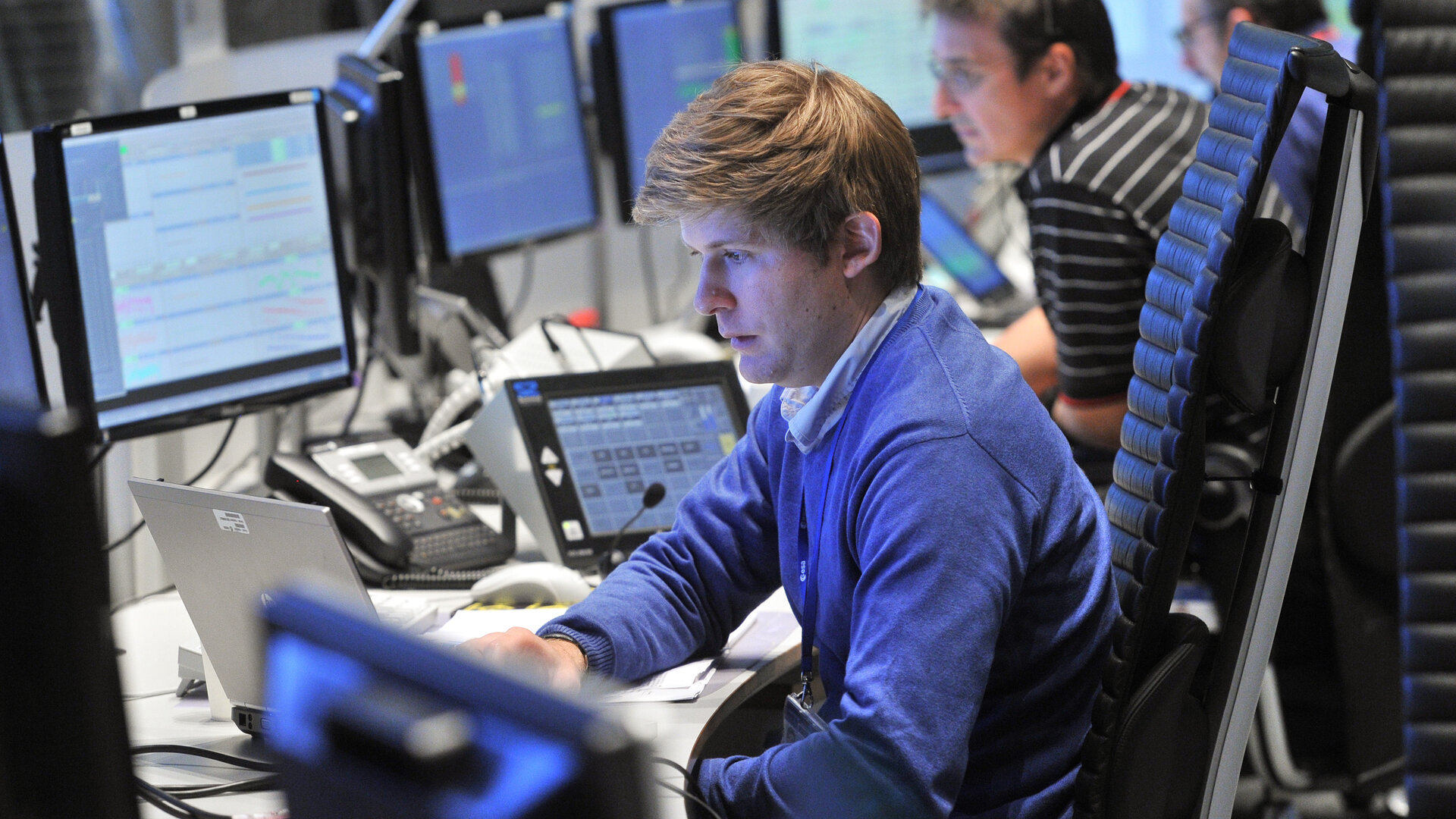 By the time just a few months remain before lift-off, the ground segment has been designed and built, a Dedicated Control Room has been fitted out, and a Flight Control Team has been assembled. Activity now starts to intensify as the centre enters the launch campaign.

With the ground segment in place, preparations for launch enter an intensive phase approximately six months before lift-off with the start of simulation training.

Simulations: Training a ‘team of teams’

Simulations are a crucial aspect of launch preparations at ESOC. The main objective of the simulation campaign is to train the permanent Flight Control Team together with other support teams that join the FCT during the intensive launch campaign; these include teams from flight dynamics, ground systems, the satellite manufacturer and the Project team from ESTEC.

Together, these are trained into a single, integrated Mission Control Team focussing on time-critical Launch and Early Orbit Phase as well as contingency operations.

In practise, this means that a series of intensive, real-time mission scenarios are rehearsed again and again, until the Mission Control Team (and their backups) are able to handle all routine as well as unplanned situations. Simulations cover every moment of the mission, running from before lift-off until the satellite enters the correct orbit with all systems functioning as expected.

Failures in systems on board the satellite and in the ground segment are also simulated, in order to train the team to resolve emergency situations and recover from them.

‘Sims’ often run 8 to 12 hours, with an extensive and detailed debriefing at the end of the day. If a mistake is made, the team repeats the simulation, until they know the process by heart and can react correctly in any situation.

Teamwork is honed to a sharp edge, and each engineer on the team knows their role and their own portion of the satellite’s systems – and they can assist team mates if needed.

Later, in subsequent mission phases, the dedicated Flight Control Team will undergo more simulation training to prepare for demanding events such as major manoeuvres or changes of orbit, entering orbit around another planet, or close flybys of an asteroid or planet.

A highly experienced Flight Operations Director (FOD; often referred to simply as 'the OD') is appointed to lead the Mission Control Team.

He or she has usually served as Spacecraft Operations Manager on earlier missions, and has the experience, training and knowledge necessary to coordinate and manage separate functional experts and ensure problems are solved, even when time is short and pressure is intense.

ESOC’s Estrack division also nominates a Ground Operations Manager (GOM; often referred to simply as the 'OM') for the Mission Control Team. The GOM has a crucial function during launch: if the satellite’s signal is not acquired by the tracking station as expected, this person is responsible for executing a pre-programmed ‘sky search’ using ESA (or partner) ground stations to search for the satellite along its planned track in the sky.

What happens in a simulation

In a typical ‘Sim week,’ the entire Mission Control Team sits on console through a series of real-time rehearsals (i.e. one hour of mission time is simulated in one hour), often running up to 12 hours and demanding concentration, precision and teamwork.

Experienced Sims Officers sit in a separate, limited-access Simulation Room; they can inject faults into any element of the ground segment, the spacecraft simulator or the tracking station simulator, forcing the mission controllers to react to a possible technical failure in real time. Some faults are pre-announced, but many are surprises to the control teams, providing intensely realistic training.

Contingency scenarios are practiced to the smallest detail, forcing the engineers to think and solve real-life problems that can affect a mission or put a billion-euro launch at risk. Aside from a full-range of technical risks, such as launcher under- or over-performance, failure of an on-board system or loss of communications, teams also practice how to react if any problems occur in the ground systems.

Teams train to continue functioning even if, for example, the Flight Director or Spacecraft Operations Manager should suddenly fall ill, or if there should be an unexpected loss of power in the control room.

The launch campaign culminates shortly before launch with full readiness of all ESOC facilities, services and teams and the ‘freezing’ of all software systems, hardware and documentation. At this point, the teams are ready, the Mission Control System is ready and the entire centre prepares for launch.