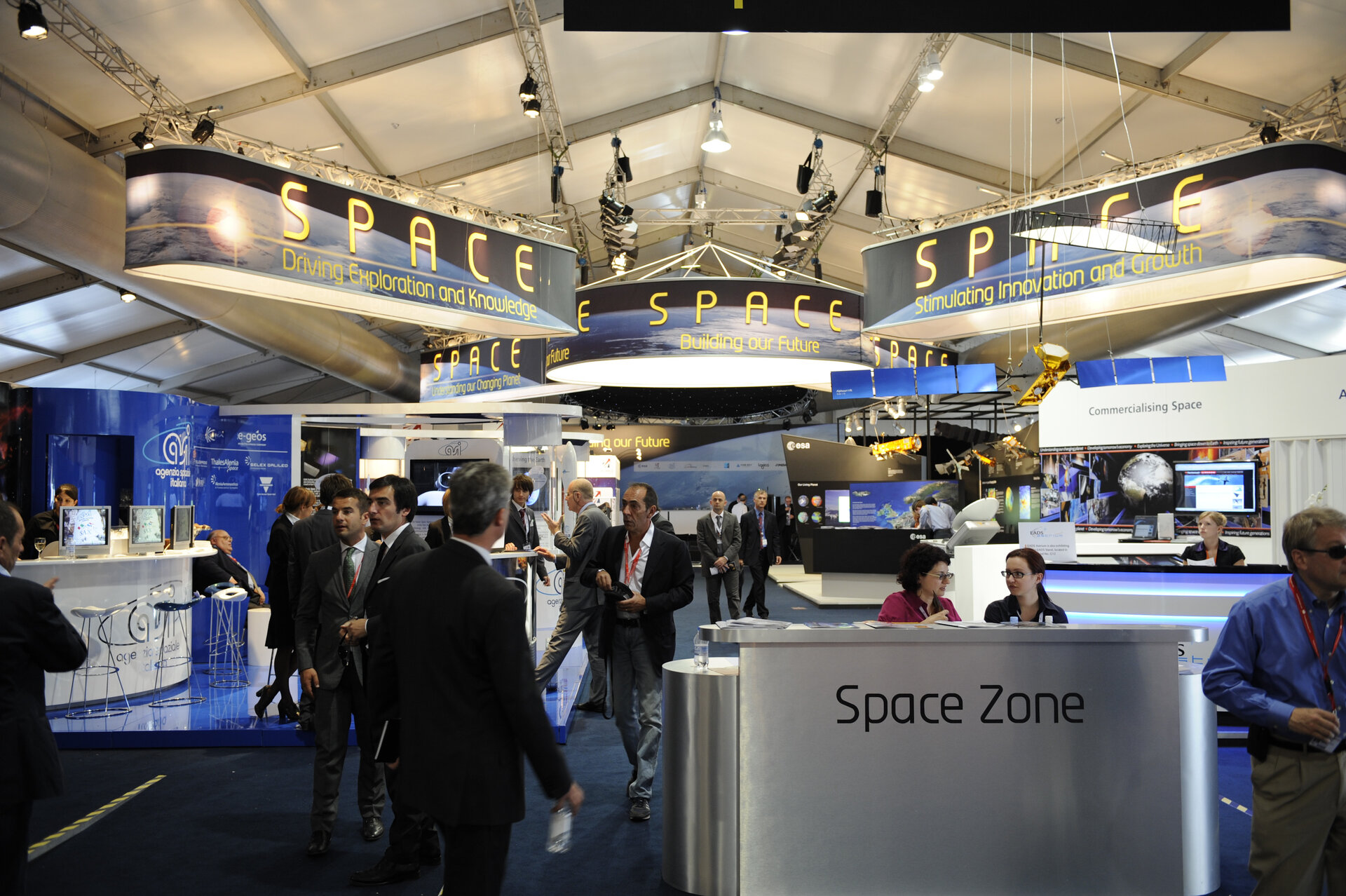 The Space Zone at FIA, organised by A|D|S, the UK Aerospace, Defence and Security trade organisation, will bring together key players from international space agencies and industry in the aerospace, defence, space and security sectors to highlight the increasingly important role of Space.

“This year”, says Fernando Doblas, Head of the ESA Communication Department, “the ESA exhibition at Farnborough will highlight the multiple facets of Space: Space for Earth, Space for Knowledge, Space for Competitiveness and Growth. At this time of unprecedented economic challenges, Space has proven to be an engine of economic development, an anchor of stability and a counterbalance to negative trends. Space-based services are more and more part of our daily life and represent a growing element of the economic and societal value of space”.

The ESA exhibition will focus on how Space pushes the frontiers of knowledge, supports an innovative and competitive Europe and creates technical innovation and new business.

With the latest results from astronomy and planetary missions, ESA will show how Space data brings important knowledge to understand the Earth, exploring its unique place in the Solar System and Universe.

Future missions for human exploration beyond the low Earth orbit of the International Space Station will be featured, together with some of the cutting-edge scientific results from experiments carried out in microgravity on Columbus and other laboratories.

From their special vantage point satellites continuously monitor the Earth and its natural processes, bringing critical information as to how climate, gravity and the magnetic field affect our planet and detect changes taking place in our atmosphere, land, oceans and ice. Particular emphasis is placed on new data from ESA’s CryoSat ice mission and Swarm, the next mission to be launched in the state-of-the-art series of Earth Explorers.

ESA’s Earth observation satellites have given Europe a leading role in understanding our planet, weather and climate change, providing data and services to a vast community of users. The exhibition will feature the next generation of Meteosat and MetOp weather and climate satellites. ESA will also display maps created for disaster relief following natural catastrophes under the International Charter on Space and Major Disasters, co-founded by ESA in 2000.

A special feature will focus on the first in the series of ESA’s Sentinel satellites, part of the EU’s Global Monitoring for the Environment and Security initiative, GMES.

Visitors to the stand can learn more about space-based services provided to aviation by EGNOS, the European Geostationary Navigation Overlay Service, operational since March 2011; and about the Galileo constellation with two satellites already in orbit and two more being launched later this year.

Visitors will also learn how ESA is supporting competitiveness of the satellite telecom industry with Hylas-1, ESA’s first public-private partnership, that has provided innovative broadband services across Europe since 2011; and the upcoming launch of Alphasat, flying on Alphabus, the first European large platform for high-power telecommunications satellites.

ESA also develops a wide range of telecom services and applications to provide space-based solutions in fields such as air traffic management and maritime surveillance efficiently and seamlessly over almost every region of our planet.

Modern life is increasingly dependent on services that rely on space-based technologies, and since 2012 Ariane 5, Soyuz and Vega are all now being launched from Europe’s Spaceport in French Guiana, providing a full range of launch capabilities for different types and sizes of satellites.

The development of technology is central to ESA’s existence, bringing future missions and applications within the realm of possibility. ESA shows its wide range of specialised laboratories in its ESTEC establishment and its highly successful PROBA, Project for On-Board Autonomy, satellite demonstration missions.

The Space Zone will host a series of high-level events including a dedicated Space Day conference organised and hosted by the UK Space Agency on Tuesday 10 July which will include speeches from David Willetts, UK Minister of State for Universities and Science; Francesco Profumo, Italian Minister of Education, University and Scientific Research and Chair of the ESA Council at Ministerial Level; Jean-Jacques Dordain, ESA Director General; Enrico Saggese, President of the Italian Space Agency, ASI; David Williams, Chief Executive of the UK Space Agency and Andy Green, CEO of Logica and Chairman of the UK Space Innovation and Growth Team.

Other presentations and events in the Space Zone will include a conference on Careers, Wednesday 11 July, on industry on Thursday 12 July and presentations for students on careers in the scientific and technical aerospace sector with an ESA astronaut on Friday 13 July.

Farnborough International Air Show 2012 is open from Monday 9 to Sunday 15 July with a special Futures Day for students on Friday 13 and access to the general public on Saturday 14 and on Sunday 15 July.