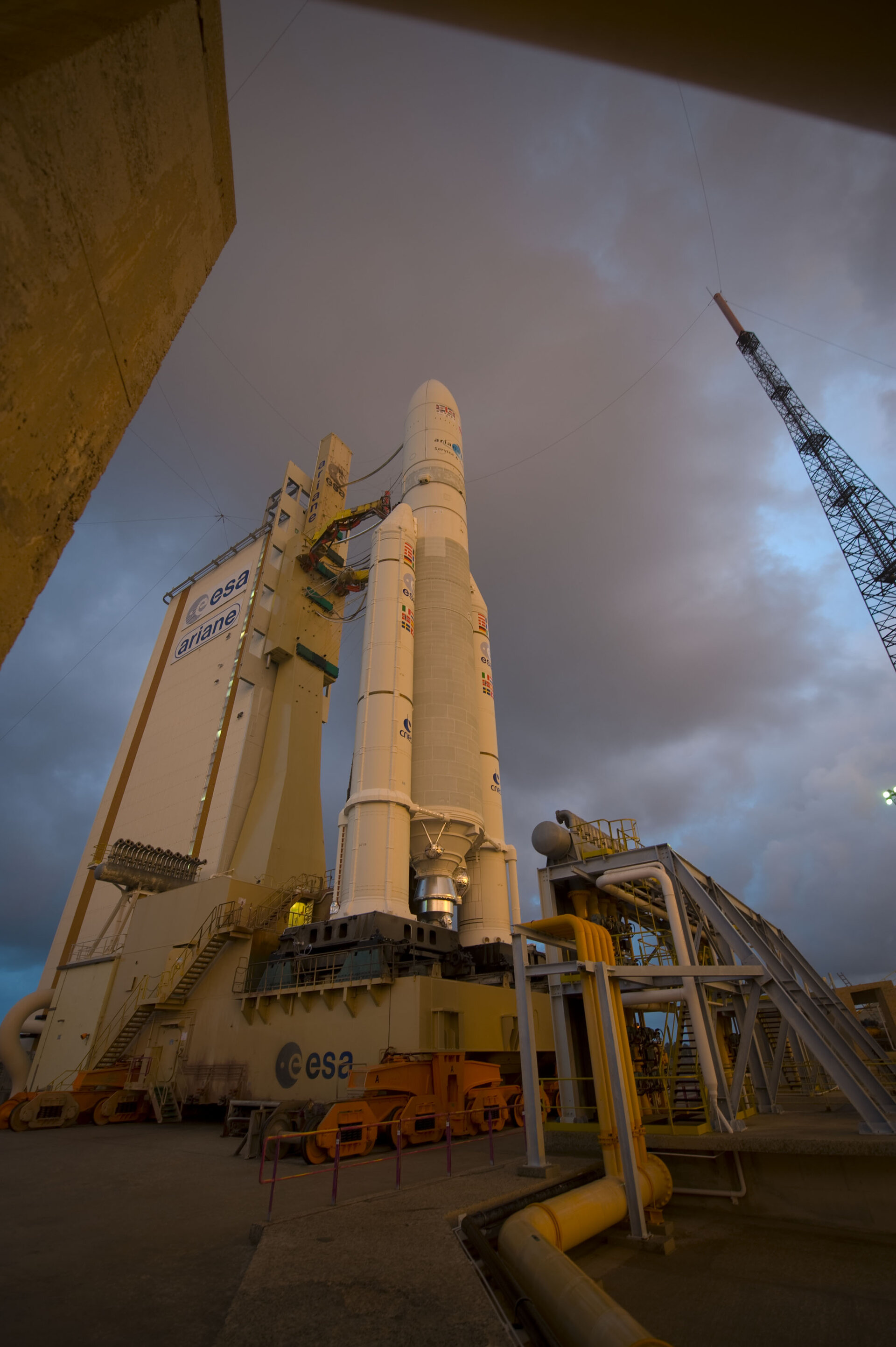 All objectives of the European Space Policy can only be achieved if access to space is ensured, and an effective presence in space requires that Europe is able to control, maintain and operate its own launch capability, at minimum cost to governments, in an autonomous way.

Commercial exploitation of launchers contributes to achieving these objectives. However, as a result, European access to space is dependent on a sustainable economic situation in the European launchers sector.

ESA’s Launcher Programmes are aimed at maintaining guaranteed access to space for Europe at an affordable cost through the exploitation of the full family of launchers (Ariane, Vega and Soyuz at the Guiana Space Centre) from 2010. The programmes also cater for the continuous consolidation of this family of launchers through their operating life and the preparation for their evolution in the medium term, also aimed at decreasing the level of dependence on non-European sources.

ESA’s launcher programmes also embed provisions for the sustained funding and availability of the Guiana Space Centre launch range in order to maintain its quality of operations and services, as well as those for the continued preparation of the Next Generation Launcher to become operational once the current family of launchers and their evolutions will have reached their operational limits (~2025).

Starting from 2010, Ariane, Soyuz and Vega launchers will be operated from Europe’s Spaceport at the Guiana Space Centre, under a legal framework that foresees a new agreement between ESA and the French government. Under this agreement, France guarantees the availability of the launch range for ESA programmes and activities as well as for the exploitation phases of Ariane, Vega and Soyuz.

The Ariane 5 Research and Technology Accompaniment Programme Extension (ARTA 2011-13) aims to eliminate flaws and weaknesses appearing during operational use and to improve knowledge of the functional behaviour of the launchers in flight.

The programme serves to maintain the qualification status of the Ariane 5 launch system, thus ensuring guaranteed and independent access to space in the heavy payload class. It is an essential continuation of the current programme and covers sample and testing, flight analysis, flight hardware anomalies and obsolescence and provides a contribution to the maintenance in operational condition (so-called MCO costs) of Ariane ground-test facilities.

Through this programme, for the period 2009-11, ESA Participating States are also putting measures in place to guarantee the continuity of Ariane 5 production in the event that the risks associated with the worldwide commercial market introduce future imbalances in the currently balanced exploitation.

The preparatory phase of the evolution of Ariane 5 is covered in the Ariane 5 Post-ECA Programme, planned to run from 2009 until 2011 (the ECA version being the current Ariane 5 'workhorse').

This programme will initiate activities for the future evolution of Ariane 5 to bring the development of the reignitable Vinci engine and of the new ryogenic upper stage to a level of technical maturity that will allow a final decision on the configuration and full development phase of the improved Ariane 5 in 2011. This will mean a qualification flight around 2016-17 and operational service up to around 2020.

The decision on the development phase will be made on the basis of the results of the preparatory phase, of industrial commitments for development completion and exploitation costs, and of consolidated market needs for the period 2015-20.

The Vega Research and Technology Accompaniment Programme Extension (VERTA) 2011-12 is the continuation of the current programme (approved in 2005 for the period 2006-10) to accompany the initial exploitation of the Vega launcher, and its maintenance in qualified status during its operational life.

The accompanying activities for the period 2011-12 cover sample and testing, flight analysis, flight hardware anomalies and obsolescence, as well as specific development activities to support the initial launcher exploitation (flight and ground segment), sized at an adequate level to take into account the Vega learning phase associated with the first flights.

Additionally, the programme proposal includes limited system activities on the most promising evolutionary configurations of the Vega launcher.

For the longer term, the proposal to continue the Future Launchers Preparatory Programme (FLPP) is aimed at preparing a solid basis for preserving independent access to space, identifying the best option for responding to future institutional needs while maintaining long-term competitiveness on the commercial market beyond 2025 (step 2 of Period 2 covers the period 2009-12; the programme was accepted in 2001 and Period 1 was adopted in 2003 to cover period 2004-06).

The programme will make it possible to achieve a significant step forward in technology maturation and validation through ground and in-flight demonstrators.

FLPP (step 2 of Period 2) addresses selected next-generation launcher concepts and at the same time investigates new expendable launcher concepts or evolutions of existing launchers. Works also include preparatory activities in view of the launch of the IXV (Intermediate eXperimental Vehicle) on board a Vega launcher in 2012, as well as ground demonstrators and technology development and verification for promising enabling technologies.

In order to safeguard industrial capabilities in certain key areas and the synergies with other launcher programmes (Ariane 5 and Vega evolutions), particular emphasis will be placed on continuation of a high-thrust engine demonstrator, a solid propulsion demonstrator and cryogenic upper-stage technologies, as well as on storable propulsion with activities on the Aestus 2 engine.

The current objectives in the Human Spaceflight and Exploration area are to maximise the return on European investment in the International Space Station (ISS), in particular its innovative scientific and technological/industrial utilisation, as well as the use of the ISS as a platform to prepare future human exploration undertakings.

ESA’s Human Spaceflight programme also aims to maintain and enhance both the operational capabilities acquired and an experienced European Astronaut Corps for the next European human spaceflight and exploration programme, beyond the ISS.

The International Space Station (ISS) Exploitation Programme (Period 3) is aimed at operating, maintaining and exploiting the European elements of the ISS and providing Europe’s contribution to common operations by delivering cargo and services (reboost, refuelling, attitude control and replenishment of gas and water). This programme also covers the European Astronaut Corps, for which ESA is currently recruiting a new group of astronauts.

The programme is structured in five-year periods sliding every three years: Period 3, 2008-12 (Period 4, 2011-15, the current end of the ISS lifetime, is not part of the proposal for the Ministerial Council 2008). During these two periods the ESA’s commitment is to provide four ATVs in addition to Jules Verne, ATV 2 to 5.

The purpose of the ISS Evolution programme (a 'slice' of the ISS exploitation programme) is to develop flight hardware which will enhance ISS capabilities and/or improve ISS operations. At the same time, these systems will allow on-orbit demonstration of capabilities needed for future long-duration manned missions. The projects considered are: an air revitalisation system, an air quality monitoring system, a high-speed telecommunication terminal and an external robotic platform for small payloads.

The European Transportation and Human Exploration Preparatory Activities Programme includes the initial definition phases of an ATV-based cargo download system (Automated Reentry Vehicle, ARV) and the continuation of cooperation with Russia. This new transportation system is planned to comprise a service module, a re-entry module and a launch escape system (for a possible subsequent crewed version).

Studies on the definition of a 'Moon lander' will also be pursued, along with the development of enabling human exploration capabilities including Moon-landing technologies, habitation and life-support systems and demonstrators. Scenario and architecture studies will be carried out to prepare future activities as well as to support the refinement of a common European vision for space exploration involving ESA, the EU and their respective Member States.