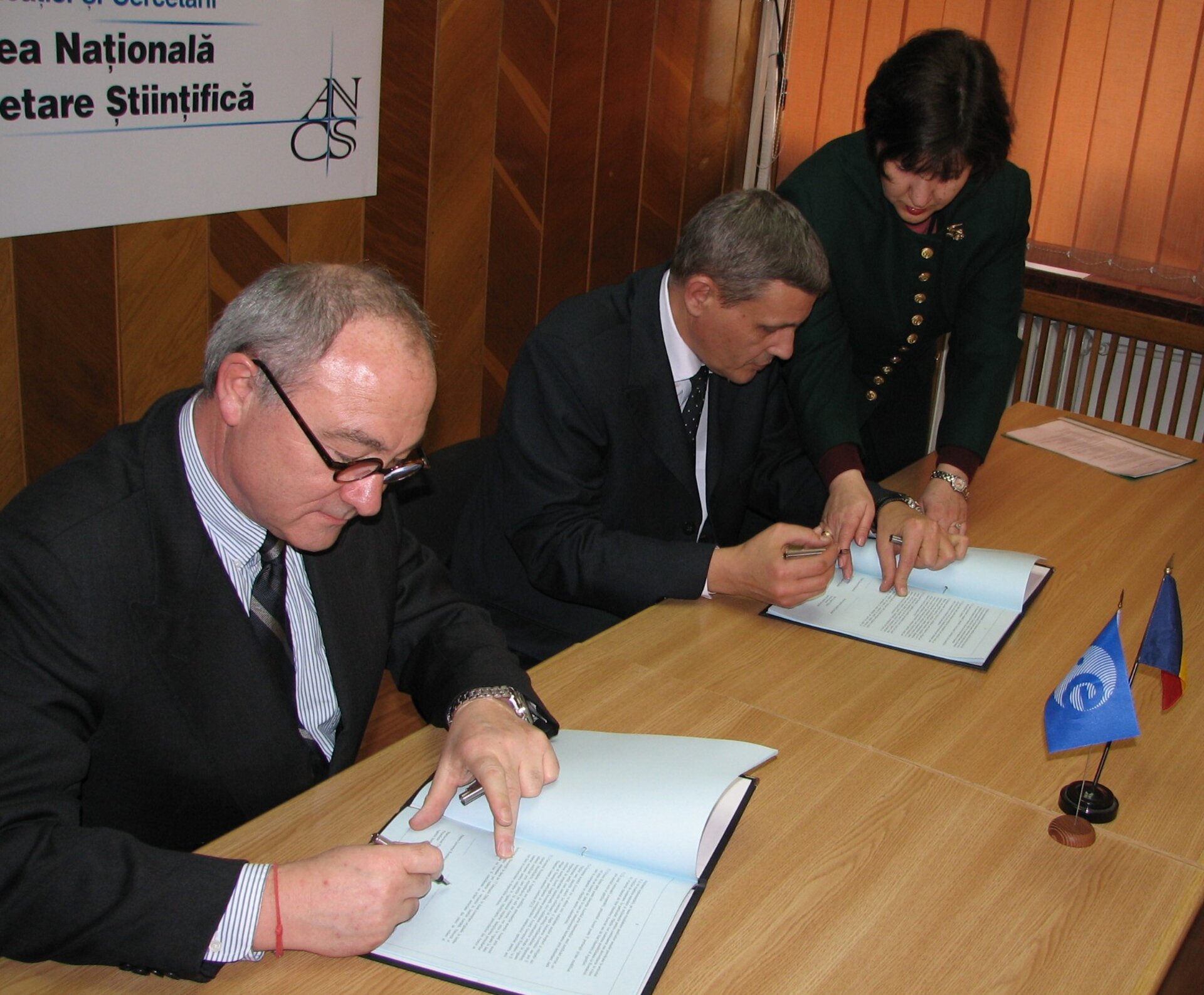 On 17 February 2006 Romania strengthened its relations with ESA by signing the European Cooperating State Agreement, becoming the third European country to join this status. Hungary was the first in April 2003 followed by the Czech Republic in November of the same year. The ceremony took place in Bucharest with the participation of Calin Popescu-Tariceanu, Prime Minister of Romania, Jean-Jacques Dordain, ESA Director General, Anton Anton, Romanian Secretary of State for Science and Technology, Marius-Ioan Piso, President and CEO of the Romanian Space Agency, and cosmonaut Dumitru Dorin Prunariu, Chairman of the Board of the Romanian Space Agency.

The signed agreement defines the legal basis for developing a Plan for European Cooperating State (PECS) Charter, describing activities, projects and budget for Romania's cooperation with ESA. It is expected that the PECS Charter will be signed within the next 12 months.

Romania has a long aerospace tradition and has contributed to more than 30 scientific and technological space missions. During the 1970s and 1980s Romania was an active member of INTERCOSMOS, the international space programme of the former socialist countries.

Romanian instruments to measure cosmos radiation, as well as magnetometers to acquire data on the Earth’s magnetic field, flew on a number of Soviet Union space missions. For many years Romania has also taken part in space activities through its affiliation with COSPAR (Committee for Outer Space Research), INTELSAT (International Telecommunications Satellite Organization) and INMARSAT (International Maritime Satellite Organisation).

On 14 May 1981, the first Romanian cosmonaut, Dumitru Dorin Prunariu, took part in a Soviet Union space mission to the space station Salyout-6. Prunariu remained on the station for eight days, working on scientific experiments with the three other cosmonauts on board.

Romania's cooperation with ESA is long standing. In 1992 Romania was one of the first eastern European countries to sign an Agreement of Cooperation in the field of the peaceful use of outer space with ESA, paving the way for Romanian participation in several research projects with other European countries. ESA/Romania cooperation was strengthened further in October 1999 with the signing of a five-year Framework Cooperation Agreement between ESA and Romania.

Romania participates in ESA’s Cluster mission, launched in 2000, and also cooperates with ESA in the Planck mission, scheduled for launch in 2007. Recently the country joined the EC-funded SURE project (the International Space Station: a Unique Research Infrastructure). This project will provide access to research opportunities on the International Space Station, primarily for researchers and Small and Medium size Enterprises (SMEs) in eastern European countries.

During the coming months Romania will define with ESA the specific areas and projects for cooperation, and the budget for the next five years. Major participation will be in ESA’s space science programme and the ESA/EC joint GMES (Global Monitoring for Environment and Security) initiative. Participation in GMES will strengthen the country’s use of Earth observation data for agricultural planning, crop forecasting and flood monitoring. Other areas of cooperation will include ESA’s microgravity and exploration programme and technology activities.