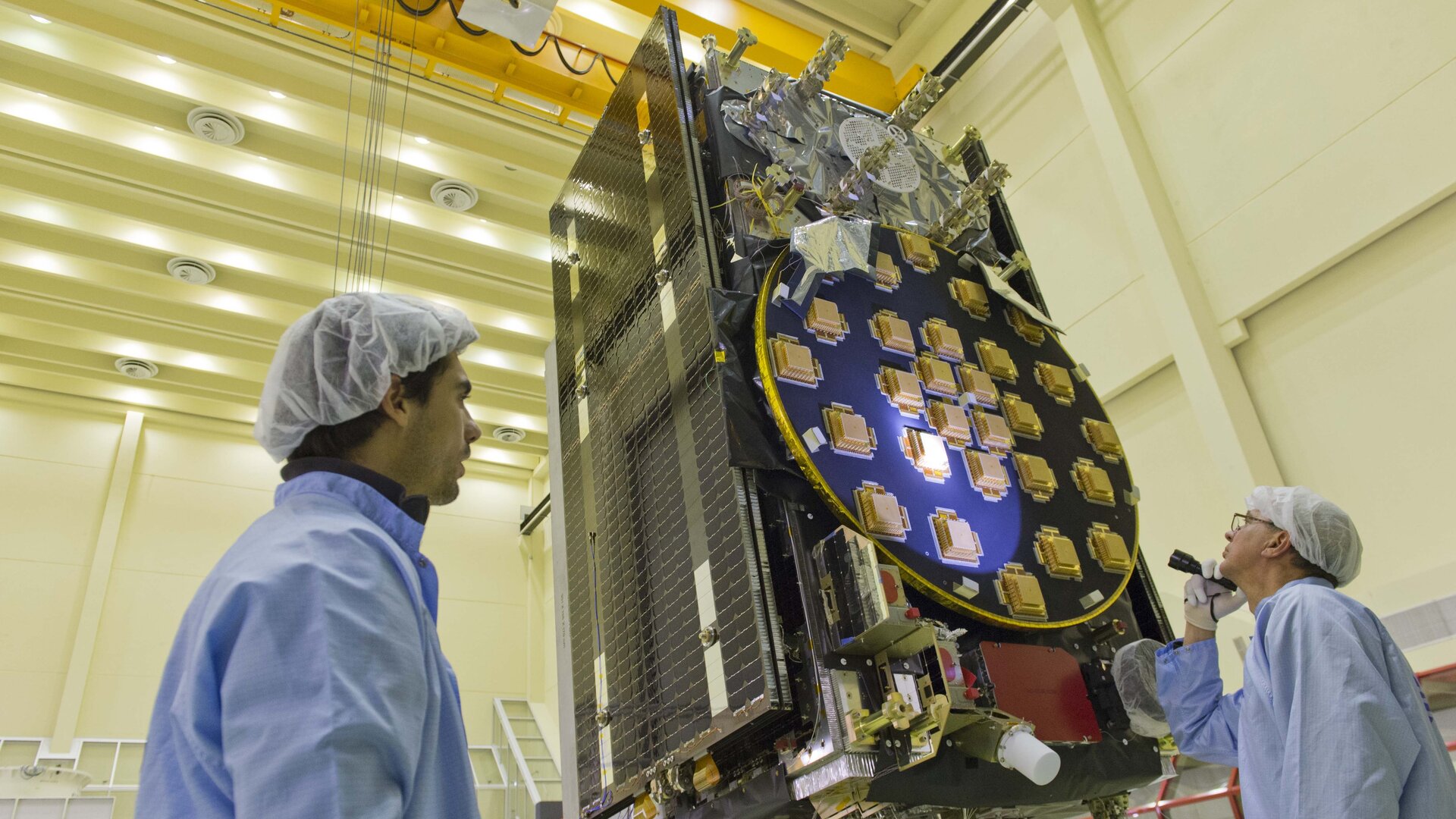 Europe’s next pair of Galileo satellites have been the focus of a busy autumn at ESA’s technical centre in the Netherlands, continuing a full-scale campaign to ensure their readiness for space.

The first of the two satellites is now midway through a five-week immersion in vacuum and temperature extremes that mimic the conditions it faces in space.

This ‘thermal–vacuum’ test takes place inside a 4.5 m-diameter stainless steel vacuum chamber called Phenix. An inner box called the ‘thermal tent’ has sides that are heated to simulate the Sun’s radiation or cooled down by liquid nitrogen to create the chill of Sunless space.

With the first four Galileos already in orbit, these new versions are the first two of a total 22 ‘Full Operational Capability’ satellites being built by OHB in Germany with a payload from Surrey Satellite Technology Ltd in the UK.

The second satellite joined its predecessor in mid-August at ESA’s European Space Research and Technology Centre in Noordwijk. This is the largest spacecraft testing site in Europe, with a full range of space simulation facilities under a single roof in cleanroom conditions.

The newly arrived satellite first underwent a ‘mass property test’ – measured to check its centre of gravity and mass are aligned within design specifications.

The more precisely these are known, the more efficiently the satellite’s orientation can be controlled with thruster firings in orbit, potentially elongating their working life by conserving propellant.

Isolated within the chamber as though floating in infinite space, the satellite could be switched on to check all its systems can operate together without interference.

A quartet of noise horns are embedded in one wall of this 11 m-wide, 9 m-deep and 16.4 m-high chamber, generating sound by passing nitrogen gas through the horns, surpassing 140 decibels in all.

Accelerometers placed within the satellite checked for potentially hazardous internal vibration during this trial by sound.

Then the spacecraft was vibrated on the shaker tables, simulating the violent forces of a rocket launch.

Up-and-down vibration on the QUAD shaker followed by side-to-side shaking on the horizontal shaker, with data gathered across hundreds of channels.

The satellite was then connected to the dispenser that will hold it during launch to simulate the separation at the end of its climb to orbit.

This separation is triggered by firing a pyro device which then pushes the satellite away from the dispenser. This demonstration took place last month.

“There will always be two Galileo satellites being tested at the ESTEC Test Centre for the next few years,” explains Giuliano Gatti, the Head of the Galileo Space Segment Procurement Office.

“As the Galileo constellation takes shape, ESTEC will remain an essential part of each satellite’s pathway to space, between the end of manufacturing in Germany and UK and the launch by Soyuz ST-B or Ariane-5 from Europe’s Spaceport in French Guiana.

“Of course, the testing on these initial FOC satellites is especially rigorous because we are validating the overall design. The Galileo satellites to follow will undergo more streamlined ‘acceptance’ testing instead.”

The next two satellites are in final assembly at OHB in Germany, scheduled to reach ESTEC early next year, as these first two satellites head off to French Guiana for launch.