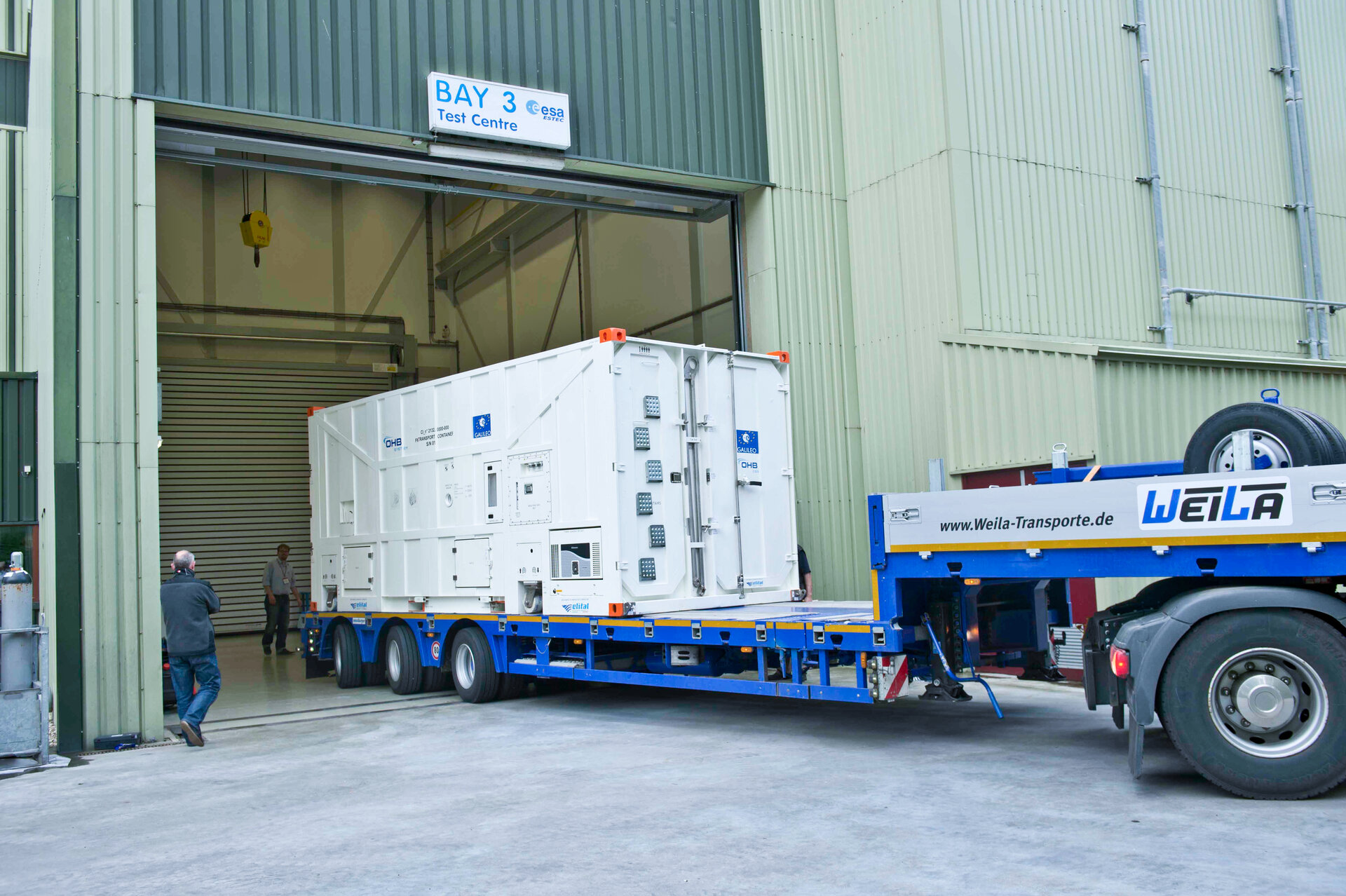 The first satellite of Galileo’s next phase has arrived at ESA’s technical heart in the Netherlands for a rigorous set of tests to check its readiness for launch.

This first Galileo Full Operational Capability – FOC – satellite is functionally identical to the first four Galileo In-Orbit Validation satellites already in orbit, the operational nucleus of the full Galileo constellation, but has been built by a separate industrial team.

Like all the other 21 FOC satellites so far procured by ESA, the satellite’s prime contractor is OHB in Bremen, Germany and the navigation payload was produced by Surrey Satellite Technology Ltd in Guildford, UK.

This first FOC satellite arrived by road at ESTEC’s Test Centre in Noordwijk, the Netherlands, on 15 May to undergo a series of tests simulating different aspects of launch and space environment. The comprehensive test programme will validate the new design and all the satellites to follow.

A unique facility for Europe, ESA’s test centre has all the facilities needed to validate a satellite for launch under a single roof.

Thermal vacuum testing will simulate the temperature extremes the satellites must endure in the airlessness of space throughout their 12-year working lifetimes. Without any moderating atmosphere, temperatures can shift hundreds of degrees from sunlight to shadow.

Other activities on the schedule include shaker and acoustic noise testing – simulating the vibration and noise of launch – as well as electromagnetic compatibility and antenna testing, placing the satellite in chambers shielded from all external radio signals to reproduce infinite space and check that its various antennas and electrical systems are interoperable without harmful interference.

Each satellite will offer the full range of Galileo positioning, navigation and timing services, plus search and rescue message relays, their accuracy ensured by onboard atomic clocks kept synchronised by a worldwide ground network.

“The Galileo FOC satellites provide the same capabilities as the previous IOV satellites, but with improved performance, such as higher transmit power,” explains Giuliano Gatti, the Head of the Galileo Space Segment Procurement Office. “They are to all intents a new design that requires a full checkout before getting the green light for launch.

“By fully validating this satellite, the second flight model due to follow it here at beginning of June, and the third one due to arrive in ESTEC at middle of July, we gain full knowledge of their characteristics, and the further satellites in the series will require less rigorous functional testing.”

The first four Galileo IOV satellites, launched in 2011 and 2012, were provided by EADS Astrium with Thales Alenia Space Italy responsible for integrating the satellites and Astrium in Portsmouth, UK, providing the navigation payloads. They provided their first navigation fix in March 2013.

The first FOC satellites are due to be launched together on a Soyuz from Europe’s Spaceport in Kourou, French Guiana this autumn, with two more due to follow by the end of the year.

The definition, development and In-Orbit Validation phases of the Galileo programme are being carried out by ESA and co-funded with the European Commission (EC).

The subsequent FOC phase is managed and funded by the EC. The Commission has delegated the role of design and procurement agent to ESA for the FOC phase. At the same time as the satellites are being assembled on a production-line basis, ground stations are also being established on far-flung European territories around the globe.