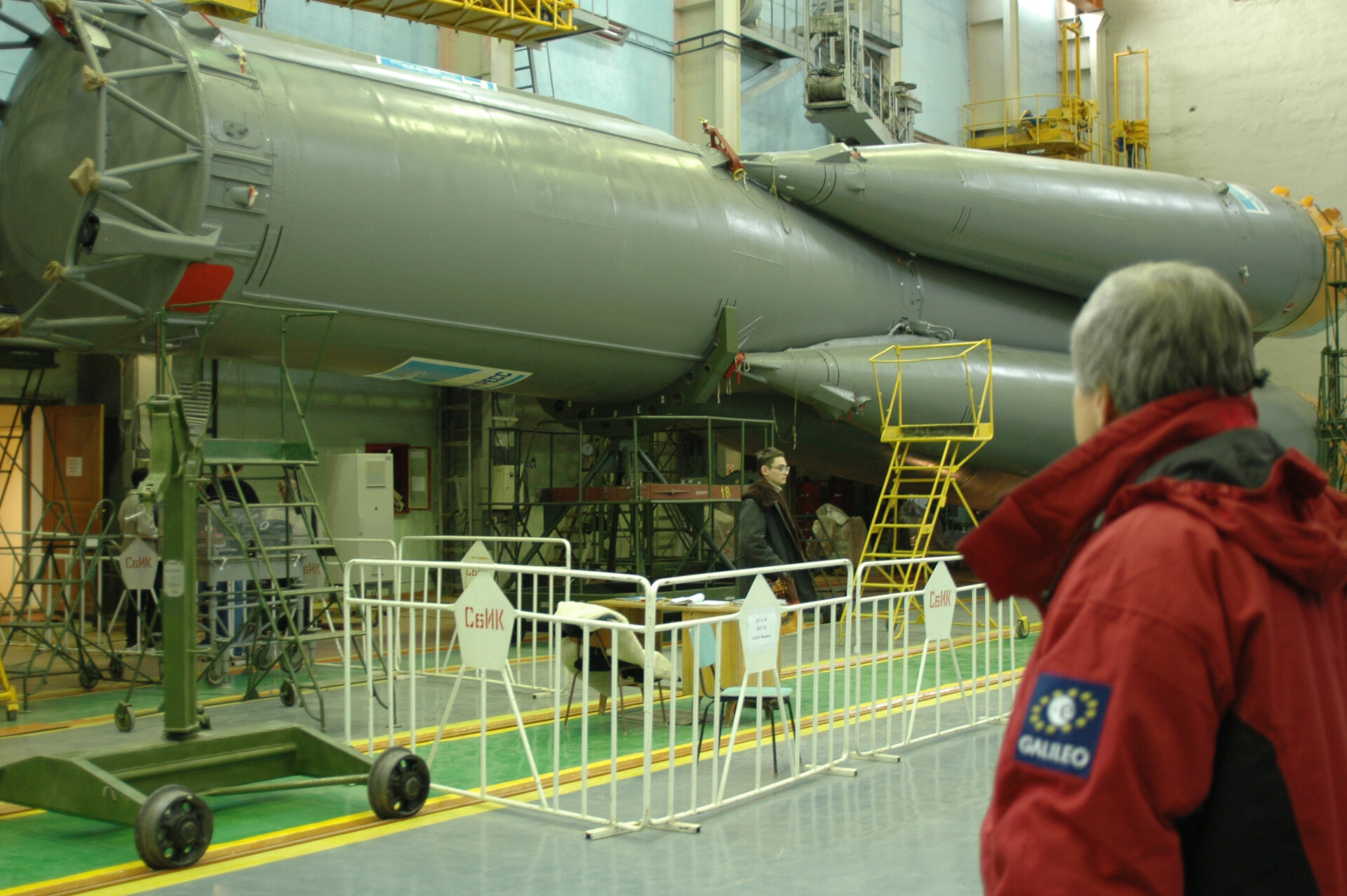 The engineering teams preparing GIOVE-A for launch at Baikonur are now fully engaged in the process of preparing the spacecraft and integrating it with the launch system.

In Baikonur, the ESA teams do not have time to notice the days passing by. Each day follows the last, always seeming alike: departure at 7:30 every morning in the bus from the Sputnik hotel, the modern establishment specially built by Starsem eight years ago. The trip to MIK 112, the building hosting GIOVE-A, lasts around 40 minutes but you hardly can see anything of the Kazakh countryside, because it is still dark. Once the day’s work is done and it is time to make the return journey to the hotel, night will be back!

During the day, from the windows of the offices of the satellite teams, one can see some stretches of desert with, here and there, a few buildings that mark out the history of this almost mythical place. The Baikonur Cosmodrome is the place from which the first space missions, from Sputnik to Gagarin, were launched. Unfortunately, the teams do not have time to take advantage of the unique space tourism opportunities, although they are all fascinated by this environment which marks the beginning of man’s quest for mastery of space. “It’s here that it all started and here we are!” confesses a young ESA engineer.

The city of Baikonur, which used to be called “little Moscow” at the time of the Soviet exploits, has been repainted on the occasion of its 50th anniversary and has become almost pretty since the preparations for the visit of President Vladimir Putin to this site in the Republic of Kazakhstan.

But the space base, whose area is equivalent to that of Belgium, has kept all its interest, even its mysteries: flat yellow-brown ground, no trees growing but many electricity pylons and telephone poles. The few roads seem to lead off to the far distance. If they are lined with telephone cables or power lines, they can lead only to the installations that are the life of Baikonur: launch pads!

Soyuz, the rocket that will launch GIOVE, has two launch sites at the former USSR Cosmodrome. One is normally used for manned space flights; it is from here that Yuri Gagarin departed to become the first man in space. The second site is used for satellite missions. On the heavy structures of its towers, stars are painted indicating the number of completed launches: 352 for pad number 6, which GIOVE will use!

Already the workmen are active around the launch pad which in a few days will accommodate the launcher. In the bunker, hidden a hundred meters from the launch pad, the stickers from Mars Express or Venus Express recall that other ESA missions left from here. It is there that the team in charge of the final preparation of GIOVE will be during takeoff, and they will not forget to add Galileo’s mark!

In a building near the pad, the Soyuz rocket intended for GIOVE is being assembled. It is now almost ready, with its impressive 20 engines which will propel it skywards - the central body, surrounded by six boosters and topped by the third stage.

Soon, the launcher will be drawn by train towards the MIK 112 facility for the installation of what is called the upper composite - the re-ignitable Fregat stage with GIOVE-A on top. Once they are joined together, the 1705th Soyuz will make its last trip to be erected on the launch pad ready for lift off. Two more days to wait for the rocket, surrounded by the platforms of the launch gantry whose lamps illuminate the surrounding central Asian steppes. The soldiers who watch over it say that they are on the Christmas tree - nickname which cannot be improved, waiting for the Christmas present of a first Galileo launch!