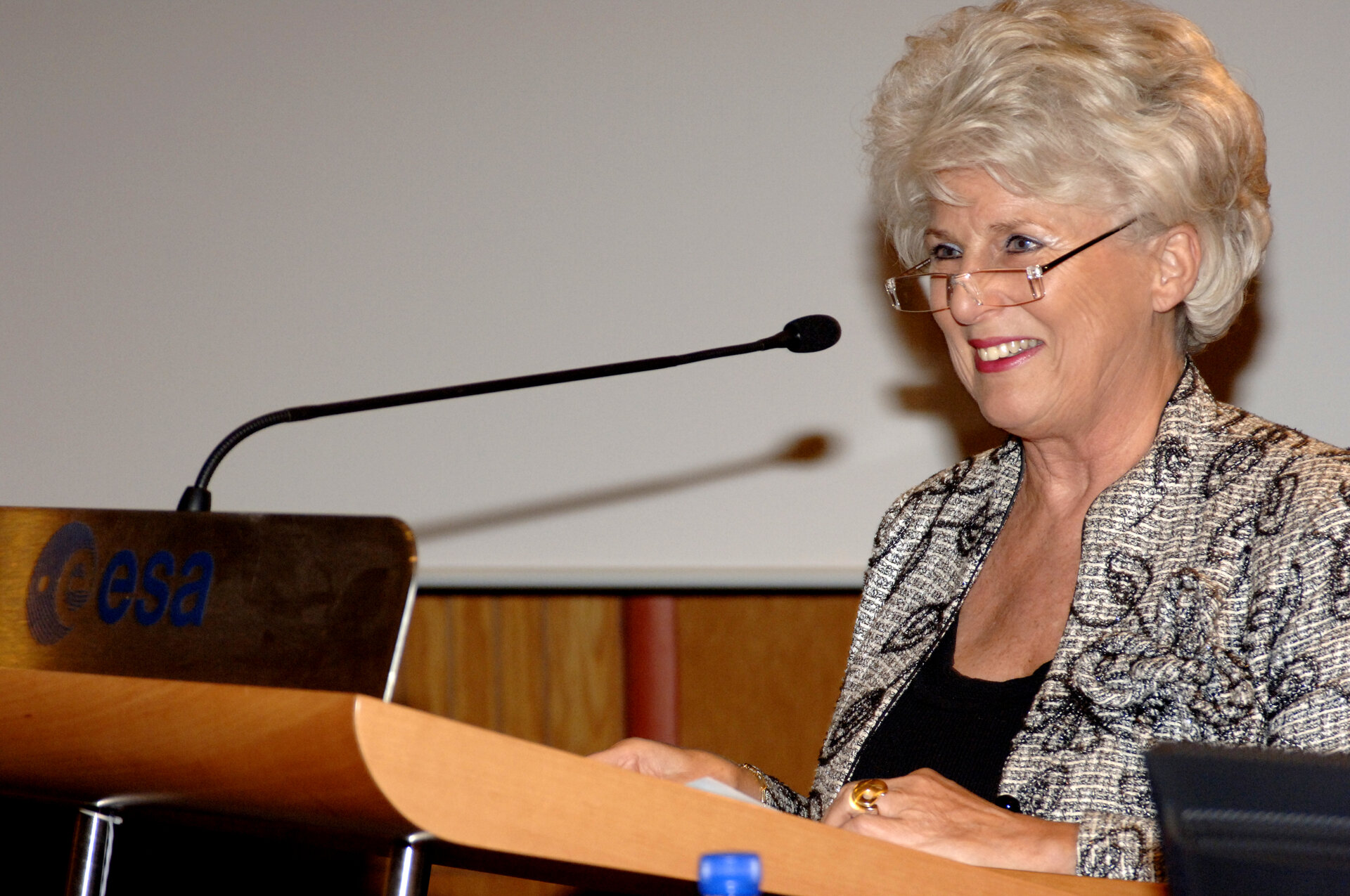 ESA PR 51-2005.
GIOVE - standing for 'Galileo In-Orbit Validation Element' - is the name that has been chosen for the two satellites which are currently being prepared to take the first step of the In-Orbit Validation phase towards full deployment of Galileo, the European satellite navigation system.

The name GIOVE was announced by Ms Karla Peijs, the Dutch Minister of Transport, Public Works & Water Management, on Wednesday 9 November, at ESA's ESTEC centre in Noordwijk (The Netherlands).

GIOVE A, the first of the two satellites, was presented to the media while undergoing final preparations at the ESTEC test facilities prior to being sent to the Baikonur cosmodrome in Kazakhstan, from where it will be launched by a Soyuz rocket at the end of December 2005. The second, GIOVE B, will be launched later in 2006, also from Baikonur.

Naming the satellites GIOVE pays fitting tribute to the achievements of Galileo Galilei (1564-1642) not only in the field of astronomy but also navigation. On 7 January 1610, as one of the first to turn his telescope to the sky, the famous scientist discovered the first four satellites of the planet Jupiter. These were later named Io, Europa, Ganymede and Callisto. Galileo realised that the formation of these four satellites, whose eclipses are frequent and visible, provided a clock whose face could be seen from every point on the Earth.

Tables describing the motion of the first four Jovian satellites to be discovered were used to determine longitude at sea and on land. Galileo’s method of determining longitude by observing the eclipses of Jovian satellites heralded a revolution in navigation, geodesy and cartography in the 17th and 18th Centuries.

Almost 400 years on, another revolution in navigation is on its way, with the advent of Europe's Galileo positioning infrastructure. GIOVE satellites A and B mark the start of in-orbit validation of this new system. They will be followed by four other satellites, to be launched in 2008.

GIOVE and its four successors will pave the way for the deployment of the complete Galileo constellation of 30 satellites. This will provide unprecedented satellite positioning, navigation and timing capabilities in the 21st Century.

This first step in the Galileo programme, known as the Galileo System Test Bed (GSTB), involves the launch of two satellites for in-orbit testing of critical technologies such as atomic clocks and novel navigation signals specifically developed for the programme. It will also secure the frequencies allocated to Galileo by the International Telecommunications Union (ITU).

Until now going under the more technical names of GSTB-V2/A and GSTB-V2/B, these first two GIOVE satellites are elements of the In-Orbit Validation phase of the Galileo programme. GIOVE A (GSTB-V2/A) is at present undergoing its final environmental test campaign on the facilities at the Agency’s ESTEC test centre. The second, GIOVE B (GSTB-V2/B), is undergoing final integration tests on the Alenia Spazio facilities in Rome (Italy).

Thus, Galileo, Europe’s innovative satellite navigation system, is getting ready for launch, preparing to deliver an innovative and advanced civil global positioning service for the benefit of citizens throughout Europe and worldwide.

The forthcoming In-Orbit Validation phase will be completed with the deployment of a constellation of four satellites (the minimum number needed to guarantee the exact position and time at test locations), along with the provision of a number of associated ground stations. Eventually, the Full Deployment phase will cover the manufacturing and launch of the 26 additional satellites completing the Galileo constellation plus the completion of the ground segment comprising an extensive network of stations and service centres.

Galileo is a joint initiative of the European Commission and the European Space Agency. It is the first satellite positioning and navigation system specifically designed for civilian purposes and will offer state-of-the-art services with outstanding performance guaranteeing accuracy, integrity, continuity and availability.