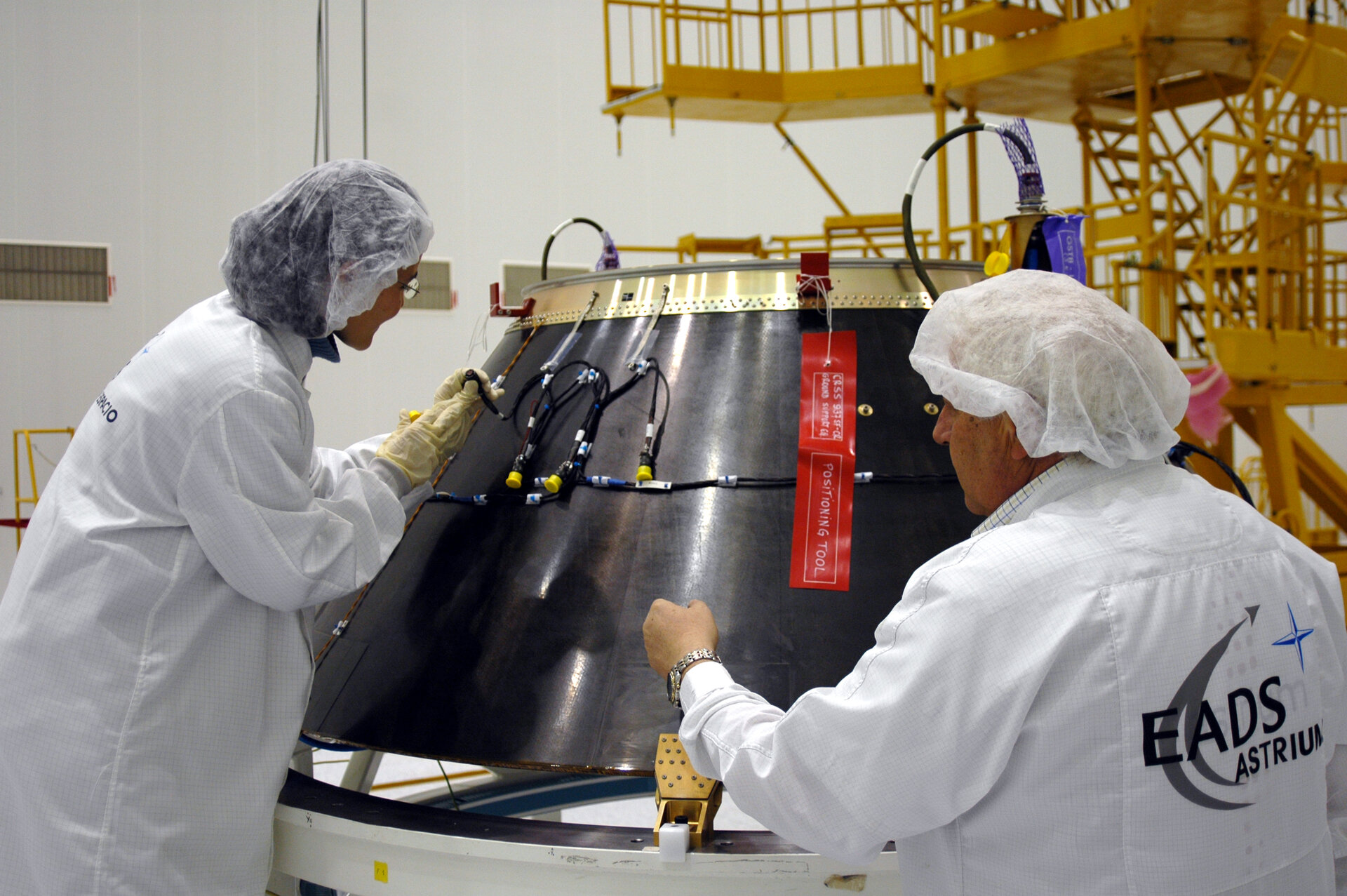 In Baikonur, while ESA engineering teams and their colleagues from SSTL are taking care of the GIOVE satellite, putting it through various tests to ensure that it is launched in perfect condition, teams from elsewhere are also busy with tasks essential to the success of the launch.

In another Starsem facility, the Upper Composite Integration Facility (UCIF), the topmost section of the launcher is being prepared. This upper part of the Soyuz rocket is the element on which the satellite will be installed a few days before the launch.

One of the specialist teams, whose members have travelled from Madrid, is comprised of five personnel from EADS Casa brought in specially to work on the payload adapter. This is a conical structure which connects the satellite to the launcher. The satellite will be mounted on the payload adapter before the resulting assembly is mated with the Fregat re-ignitable upper stage of Soyuz rocket. As with their ESA colleagues, their responsibility is heavy!

Onto the payload adapter, which is of the same design as that already used for Mars Express and Venus Express, the team will mount a clamp band equipped with a pyrotechnic device which will allow the separation of the spacecraft from the launcher. This separation is the final step in the launching of GIOVE-A by the Soyuz rocket.

Inside the conical payload adapter, springs are already under tension. When the bolts holding the clamp band that fixes the satellite on the rocket are cut, these springs will immediately provide the impulse to separate GIOVE from Soyuz. There is no room for error here either. The critical points are numerous, the launch of a satellite being a succession of different tasks, both small and large, that must all be completed flawlessly. This is why every action and every change must be foreseen, noted and analysed, but without upsetting the planning of the launch preparations.

Days in Baikonur are long for the campaign teams, their rhythm set by meetings allowing the review of what has been done and what is still left to do. Discussions between ESA experts, meetings between ESA and SSTL, the satellite builder and regular interactions also, of course, with the Starsem launch teams who are working on the implementation of Soyuz. Carefully regulated team work, carried out with extreme patience, so that nothing is forgotten in this launch campaign whose reward will be the injection into orbit of GIOVE-A, the first European navigation satellite.