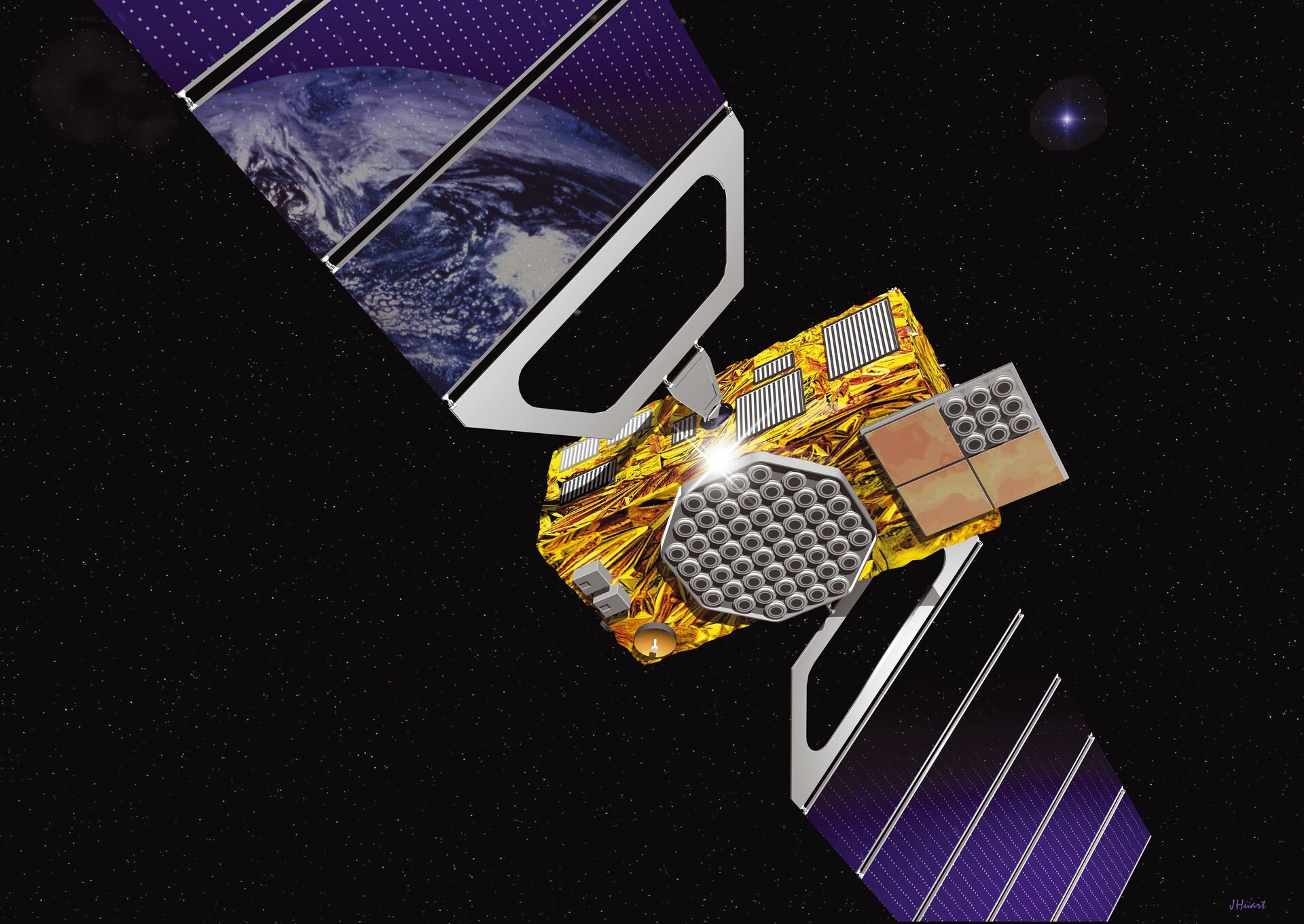 The Galileo Space Segment will comprise a constellation of a total of 30 Medium Earth Orbit (MEO) satellites, of which 3 are spares, in a so-called Walker 27/3/1 constellation.

Each satellite will broadcast precise time signals, ephemeris and other data. The Galileo satellite constellation has been optimised to the following nominal constellation specifications:

The image shows an artist's impression of a Galileo spacecraft in orbit with solar arrays deployed. The spacecraft rotates about its Earth-pointing axis so that the flat surface of the solar arrays always faces the Sun to collect maximum solar energy. The antennas, shown on the underside of the body in the picture, always point towards the Earth. The spacecraft body will measure 2.7 m x 1.1 m x 1.2 m and the deployed solar arrays span 13 m.

The L-band antenna transmits the navigation signals in the 1200-1600 MHz frequency range.

The SAR (Search and Rescue) antenna picks up distress signals from beacons on Earth and transmits them to a ground station for forwarding to local rescue services.

The C-band antenna receives signals containing mission data from Galileo Uplink Stations. This includes data to synchronise the on-board clocks with a ground-based reference clock and integrity data which contains information about how well each satellite is functioning. The integrity information is incorporated into the navigation signal for transmission to users.

Two S-band antennas are part of the telemetry, tracking and command subsystem. They transmit housekeeping data about the payload and spacecraft to ground control and, in turn, receive commands to control the spacecraft and operate the payload. The S-band antennas also receive, process and transmit ranging signals that measure the satellite's altitude to within a few metres.

The infrared Earth sensors and the Sun sensors both help to keep the spacecraft pointing at the Earth. The infrared Earth sensors do this by detecting the contrast between the cold of deep space and the heat of the Earth's atmosphere. The Sun sensors are visible light detectors which measure angles between their mounting base and incident sunlight.

The space radiators are heat exchangers that radiate waste heat, produced by the units inside the spacecraft, to deep space and thus help to keep the units within their operational temperature range.

A passive hydrogen maser clock is the master clock on board the spacecraft. It is an atomic clock which uses the ultra stable 1.4 GHz transition in a hydrogen atom to measure time to within 0.45 ns over 12 hours.

A rubidium clock will be used should the maser clock fail. It is accurate to within 1.8 ns over 12 hours.

The spacecraft has four clocks, two of each type. At any time, only one of each type is operating. Under normal conditions, the operating maser clock produces the reference frequency from which the navigation signal is generated. Should the maser clock fail, however, the operating rubidium clock will take over instantaneously and the two reserve clocks will start up. If the problem with the failed maser clock is unique to that clock, the second maser clock will take over from the rubidium clock after a few days when it is fully operational. The rubidium clock will then go on stand-by or reserve again. In this way, by having four clocks, the Galileo spacecraft is guaranteed to generate a navigation signal at all times.

The clock monitoring and control unit provides the interface between the four clocks and the navigation signal generator unit (NSU). It passes the signal from the active master clock to the NSU and also ensures that the frequencies produced by the master clock and the active spare are in phase, so that the spare can take over instantly should the master clock fail.

The remote terminal unit is the interface between all the payload units and the on-board computer.

SADM is the drive mechanism that connects the solar arrays to the spacecraft and rotates them slowly so that the surface of the arrays can remain perpendicular to the Sun's rays at all times.

The gyroscopes measure the rotation of the spacecraft.

The reaction wheels control the rotation of the spacecraft. When they rotate, so does the spacecraft. It rotates twice per orbit to allow the solar arrays to remain parallel to the Sun's rays.

The magneto bar modifies the speed of rotation of the reaction wheels by introducing a torque (turning force) in the opposite direction.

The power conditioning and distribution unit regulates and controls power from the solar arrays and batteries and distributes it to all the spacecraft's subsystems and payload.

The on-board computer controls all aspects of spacecraft and payload functioning.