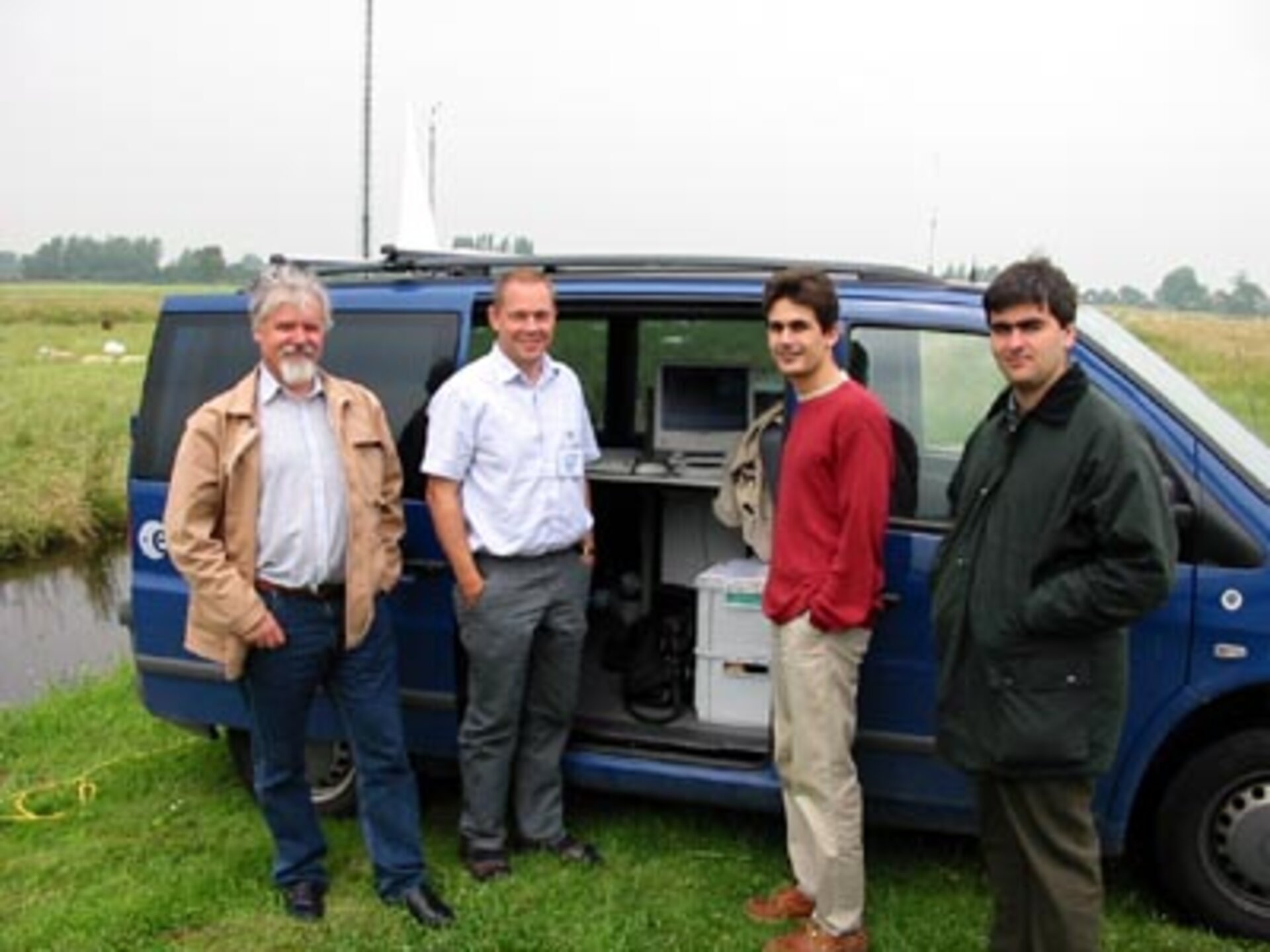 Galileo, Europe's billion-euro satellite navigation system, will provide a guaranteed service when it becomes fully operational in about 2008. However, radio signals broadcast by other users in the Galileo frequency band could interfere with reception in some areas. This summer the European Space Agency has been investigating where the interference is and what to do about it.

A Mercedes van has been touring the hotspots of Europe - not beaches and resorts, but airports, military installations and similar venues where radio signals within the frequency band allotted to Galileo are sometimes used for legitimate purposes, such as helping aircraft to land safely. If nothing were done about it, these local signals could blank out the much weaker signals from the Galileo satellites resulting in 'outage' over the surrounding area. The problem is not confined to Galileo. Outages of the US GPS signal over a 100 km radius have been reported in some parts of Europe.

When fully developed, Galileo will consist of 30 satellites in circular orbits about 24,000 km above the Earth. The satellites will broadcast signals from which users with Galileo receivers will be able to tell the precise time and determine their positions with greater accuracy than ever before. There will be a number of different signals from Galileo each fulfilling well defined functions. Some will be reserved for public services, such as the emergency services; some will be for operators of commercial services, such as road traffic information services; some will be for use where safety of life is critical, such as aircraft landing; and some will be for mass market applications(for example through an open access signal) for anyone with a hand held receiver. The impact of satellite navigation services on modern life is expected to be similar to that of the mobile phone, so taking steps to avoid outage due to interference signals is important.

The specially equipped van started its journey at Vienna airport in April, close to the home of the Joanneum Research group who designed the equipment in the van and then conducted the search campaign. The task was to locate interference sources and measure the characteristics of the signals. The plan is to design Galileo receivers in such a way that they can function in the presence of interference signals.

The van journeyed across five countries, visiting various hotspots including harbours and meteorological sites as well as military and civil airfields. "We made routine measurements as we went along, as well as when we got to our destinations," says Norbert Witternigg from the Joanneum Institute who travelled with the van. "When we found an unexpected source, we stopped to make directional measurements to find out where it was coming from."

Some of these unexpected signals could have come from legitimate sources, some could have been generated by malfunctioning equipment designed to transmit at a different frequency, but some could have been due to illegal transmissions. Broadcasters of signals require a licence, so the authorities will be investigating.

There were a few hitches along the way. In France, the van had to stop for two days for repairs. And in Le Havre the police wanted to know what this van was doing close to the harbour. "We were asked what we were exactly measuring, so we had to explain," says Witternigg.

The tour is now finished, and the results are being analysed. They will be presented to the Galileo project specialists in a workshop at ESA's European Space Research and Technology Centre (ESTEC, Noordwijk, The Netherlands) on 12 December 2002.

The design of Galileo will not only allow users to safely navigate in the presence of unwanted interference, it will also ensure inter-operability with the existing satellite navigation systems (the American GPS and the Russian GLONASS system) with which the frequency bands are shared.

For more information on the this project or the workshop, please email ESA.