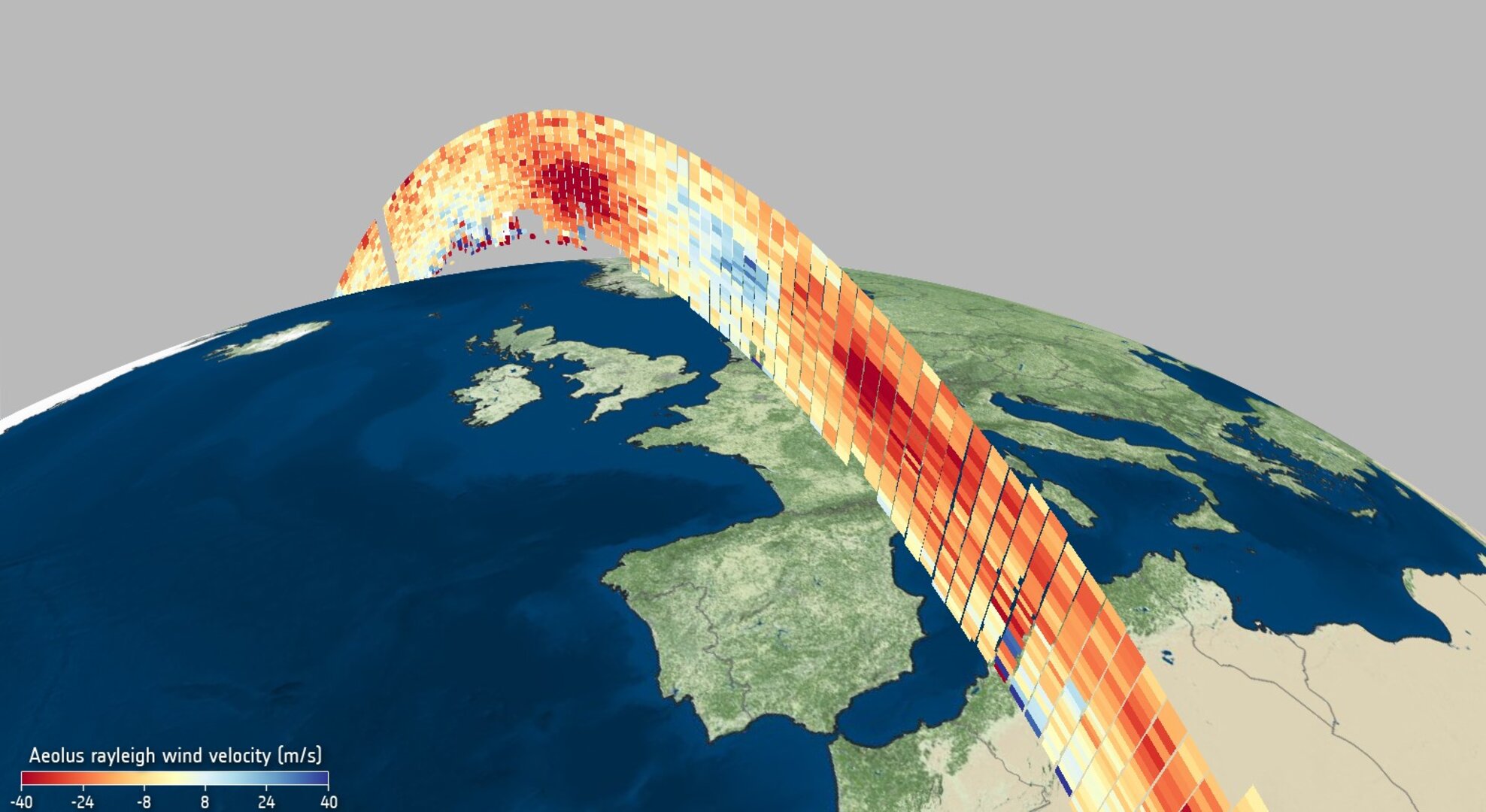 Delivering new information about Earth’s winds, ESA’s Aeolus mission has already been hailed a success. Today, this remarkable satellite mission has yet again achieved new heights: its data are now being distributed publicly to forecasting services and scientific users in less than three hours of measurements being made from space.

Aeolus is one of ESA’s Earth Explorer missions, which all set out to demonstrate how new ways of observing Earth can advance our understanding of how the planet works as a system.

Carrying one of the most sophisticated instruments ever to be put into orbit, Aeolus is the first satellite mission to directly profile Earth’s winds from space.

It works by emitting short, powerful pulses of ultraviolet light from a laser and measures the Doppler shift from the very small amount of light that is scattered back to the instrument from molecules and particles to deliver vertical profiles that show the horizontal speed of the world’s winds in the lowermost 26 km of the atmosphere.

ESA’s Director of Earth Observation Programmes, Josef Aschbacher, said, “Aeolus was never going to be an easy satellite mission to develop, and, indeed, it took some years to get it right before it could be launched. The wait was certainly worth it though, and in the 20 months that it has been in orbit, it has gone from strength to strength that will lead to benefits for science and society alike.

“And, thanks to all the teams involved and in agreement with EUMETSAT, we are very proud to announce that as of today, Aeolus’ data are being distributed in near-real time for numerical weather prediction beyond the Aeolus core user community.”

ESA’s Peggy Fischer said, “A huge amount of work has gone into perfecting Aeolus’ data before today’s public release. This satellite technology is completely new so we have had to understand and correct certain biases in the data that were not known before launch.

“To do this, key Aeolus experts from different organisations worked together in the Data Innovation and Science Cluster team – the Aeolus DISC, to validate and optimise the data processing and bias correction methods.”

ESA’s Jonas von Bismarck, added “As the last and particularly tricky bit of the puzzle, a bias related to temperature variations across the instrument’s telescope was corrected, making the data ready to be used in numerical weather prediction without the forecast centres having to carry out further complex corrections.”

The European Centre for Medium-Range Weather Forecasts (ECMWF) in the UK has already been including Aeolus data in their forecasts since January, relying on their own bias correction scheme. 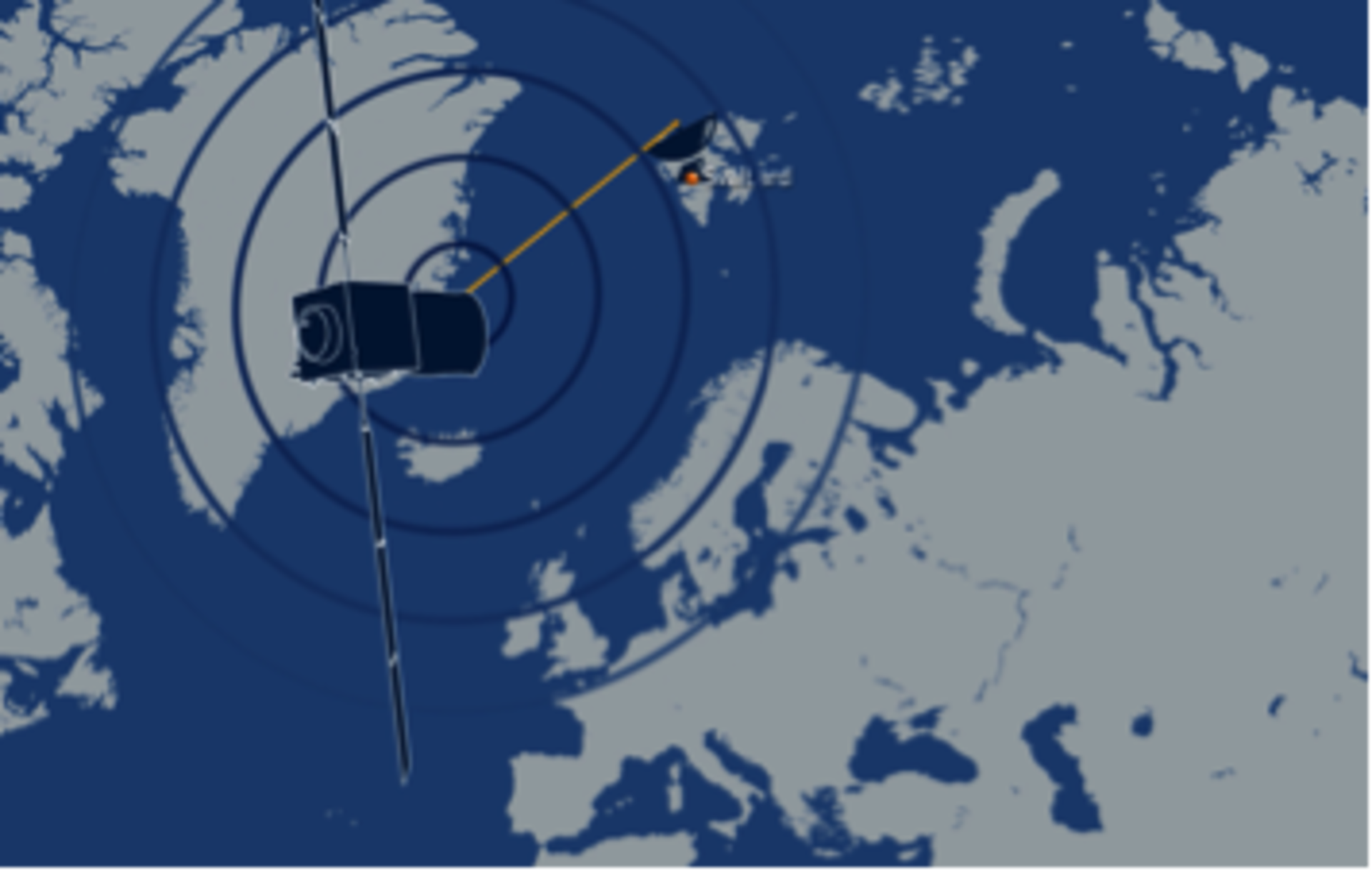 Florence Rabier, Director-General at ECMWF, said, “After several months of testing last year we were confident of assimilating Aeolus wind data into our forecasts, which we’ve been doing since this January. We are now thrilled to see that the last biases have been corrected, benefiting us and additional weather centres that are getting ready to use the data.”

These new data are being distributed in near real-time through ESA’s Aeolus Online Dissemination Centre as well as other channels, namely EUMETCast, which is the European Organisation for the Exploitation of Meteorological Satellites’ (EUMETSAT’s) dissemination system, and the World Meteorological Organization’s Global Telecommunication System (GTS).

With Aeolus built as a research and demonstrator mission, it has shown its worth as an operational mission with the data being used for everyday weather forecasting, paving the way for a possible future fleet of operational Doppler wind lidar satellites in space.

Alain Ratier, Director-General of EUMETSAT, concluded, “EUMETSAT will now push Aeolus data in near-real time to the 4000 users of EUMETCast and to the full WMO community, to give the opportunity to every forecast centre to familiarise with the novel data and measure their value. This user feedback, together with the results of on-going ESA instrument and satellite studies, will support our planning of a possible operational Doppler Lidar mission adding a missing wind profiling capability to our next generation EPS-SG polar system.”