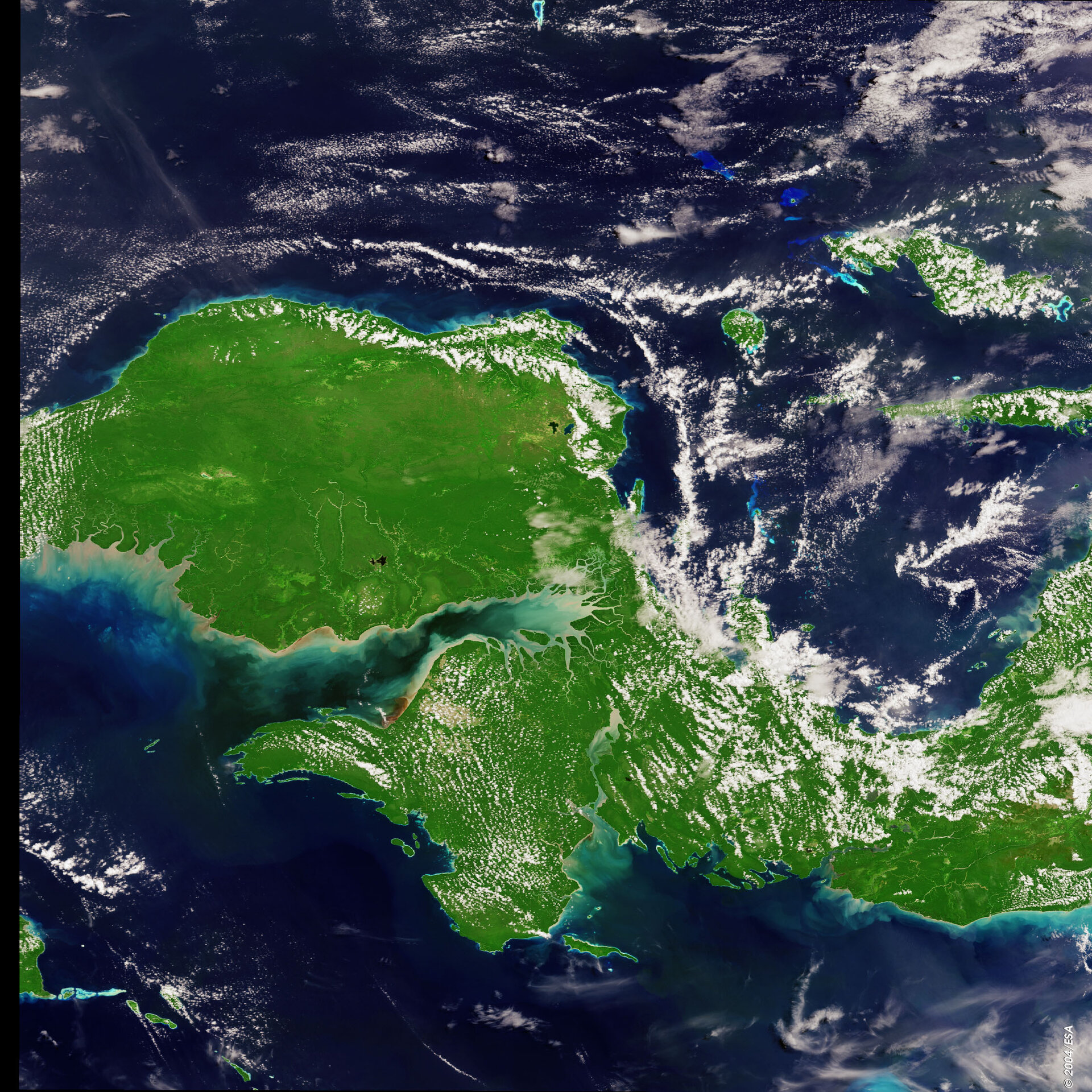 Visible from 800km away in space is the verdant rainforest that covers the distinctive Bird's Head or Doberai Peninsula of the island of New Guinea, together with the Bomberai Peninsula below it.

New Guinea is divided between the independent nation of Papua New Guinea on its eastern side, and the easternmost - and single largest - province of Indonesia, Papua, the western half of which is seen here.

According to the World Wildlife Fund, New Guinea as a whole is home to the world's third largest block of unbroken tropical rainforest and contains as many distinct bird and plant species as Australia in just one-tenth its land area - including unique animals such as tree kangaroos and almost all the world's birds of paradise. Its many tribes speak around 1100 different languages, making it home to almost one fifth of global languages.

The shape of New Guinea is often compared to a bird, with its westernmost extremity as its head. Attached to what is already an ecologically rich island, the Bird's Head Peninsula is a particular treasure house.

Its beaches are nesting sites for endangered Leatherback turtles, while the montane rainforest of its northeastern highlands – including the 63000-hectare Arfak Mountains Nature Reserve - is renowned for its many species of bird-wing butterflies and birds.

The relative inaccessibility of the rugged terrain of the Arfuk Mountains means this habitat remains largely intact, although being close to the expanding population centre of Manokwari it is increasingly encroached upon by road construction, expansion of commercial agriculture and ranching.

The southern part of the Bird's Head Peninsula is made up of lowlands and coastal swamps, through which long rivers run down from the mountains to the sea, as is the Bomberai Peninsula seen below it.

Until 2002 Papua was known as Irian Jaya, meaning 'Victorious Hot Land'. In 1969 it was the last former Dutch East Indian colony to come under Indonesian rule. Sometimes called Indonesia's "Wild East", the territory is the subject of increasing interest by oil and mineral companies.

This image was acquired on 20 March 2004 by MERIS in full resolution mode, providing 300-metre spatial resolution.