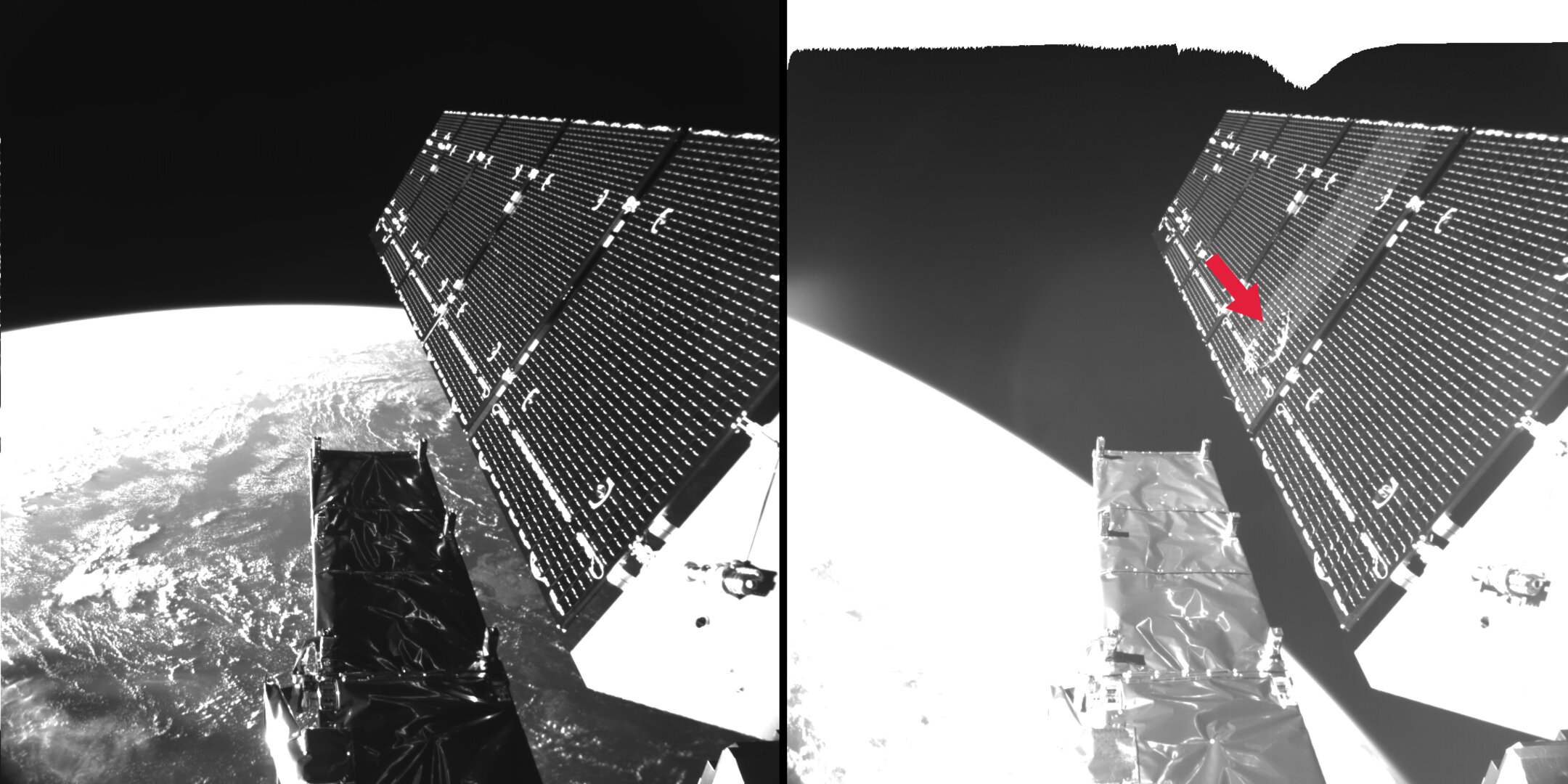 ESA engineers have discovered that a solar panel on the Copernicus Sentinel-1A satellite was hit by a millimetre-size particle in orbit on 23 August. Thanks to onboard cameras, ground controllers were able to identify the affected area. So far, there has been no effect on the satellite’s routine operations.

A sudden small power reduction was observed in a solar array of Sentinel-1A, orbiting at 700 km altitude, at 17:07 GMT on 23 August. Slight changes in the orientation and the orbit of the satellite were also measured at the same time.

Following a preliminary investigation, the operations team at ESA’s control centre in Darmstadt, Germany suspected a possible impact by space debris or micrometeoroid on the solar wing.

Detailed analyses of the satellite’s status were performed to understand the cause of this power loss. In addition, the engineers decided to activate the board cameras to acquire pictures of the array. These cameras were originally carried to monitor the deployment of the solar wings, which occurred just a few hours after launch in April 2014, and were not intended to be used afterwards.

Following their switch-on, one camera provided a picture that clearly shows the strike on the solar panel.

The power reduction is relatively small compared to the overall power generated by the solar wing, which remains much higher than what the satellite requires for routine operations.

“Such hits, caused by particles of millimetre size, are not unexpected,” notes Holger Krag, Head of the Space Debris Office at ESA’s establishment in Darmstadt, Germany.

“These very small objects are not trackable from the ground, because only objects greater than about 5 cm can usually be tracked and, thus, avoided by manoeuvring the satellites.

“In this case, assuming the change in attitude and the orbit of the satellite at impact, the typical speed of such a fragment, plus additional parameters, our first estimates indicate that the size of the particle was of a few millimetres.

“Analysis continues to obtain indications on whether the origin of the object was natural or man-made. The pictures of the affected area show a diameter of roughly 40 cm created on the solar array structure, confirming an impact from the back side, as suggested by the satellite’s attitude rate readings.”

This event has no effect on the satellite’s routine operations, which continue normally.