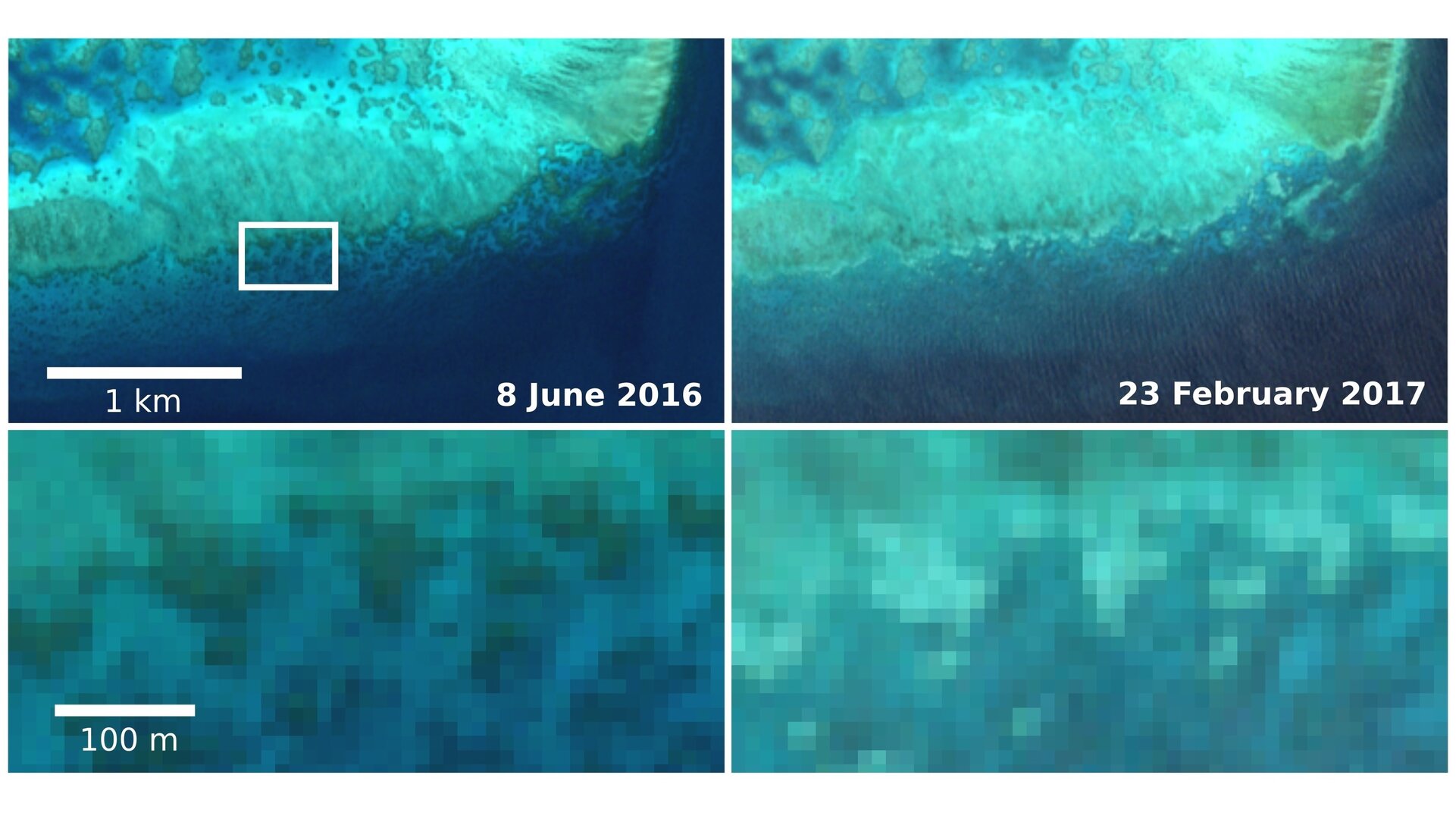 Scientists observed the bleaching of Australia’s Great Barrier Reef early this year using satellite images. While capturing these events from space has been difficult in the past, Sentinel-2’s frequent revisits and its resolution makes it possible.

The corals of the Great Barrier Reef have now suffered two bleaching events in successive years. Experts are very concerned about the capacity for reef survival under the increased frequency of these global warming-induced events.

Bleaching happens when algae living in the corals’ tissues, which capture the Sun’s energy and are essential to coral survival, are expelled owing to high water temperatures.

The whitening coral may die, with subsequent effects on the reef ecosystem, and thus fisheries, regional tourism and coastal protection.

The bleached state of a coral can last up to six weeks. The corals might recover, or die and become covered by algae, in either case turning dark again, making them hard to distinguish from healthy coral in a satellite image. Such a pattern requires systematic and frequent monitoring to reliably identify a coral bleaching event from space.

Studying Sentinel-2 images captured over the reef between January and April, scientists working under ESA’s Sen2Coral project noticed areas that were likely to be coral appearing to turn bright white, then darken as time went on.

The event was confirmed by two successive images captured in February, indicating the approximate duration of the bleaching being at least 10 days.

“In general, interpreting changes is ambiguous. You can’t just jump to the conclusion brightening is bleaching because the brightness of any spot on a reef varies from image to image for many reasons due to both the water and bottom changes,” said Dr John Hedley, scientific leader of Sen2Coral.

Dr Chris Roelfsema of the University of Queensland’s Remote Sensing Research Centre, and lead of the Great Barrier Reef Habitat Mapping Project, conducted field campaigns in the area, collecting thousands of geo-located photos of the corals in January and again in April. These were used to confirm the satellite observations.

“Sadly, in the areas where bleaching can be seen, the abundant coral cover we observed in January was in April mostly overgrown with turf algae, with only some individual coral species surviving. The imagery and field data suggest this area has been hit badly,” he said.

Since monitoring of bleaching is typically conducted manually by airborne surveys or diving, many reefs of the world are not effectively monitored.

Bleaching is also difficult to monitor in satellite imagery because of constant variations in the overlying water and other changes in the bottom such as micro-algal blooms.

The frequent revisits of Sentinel-2 allow these variations to be removed and help the detection of bleaching events before coral recovery or algal overgrowth turns the area dark again.

With both Sentinel-2 satellites now in orbit, the mission can contribute significantly to an increased understanding of pressures on coral reefs at a global scale.

“Sentinel 2 is a game-changer for coral reef remote sensing; the combination of frequent revisit and spatial resolution is enabling us to see genuinely new things,” said Dr Hedley.

“We now know bleaching can be visible in satellite imagery, but the challenge is to produce reliable software that can map or quantify that.

“It has to account for all sources of temporal variation and, importantly, the uncertainty in the methods. The methods have to be open for scientists to be able to interpret the outputs.”

Towards this aim, a set of software specifically for coral reef applications is being created by ESA’s Sen2Coral project and is expected to be available on the open-source SNAP toolbox by the end of the year.