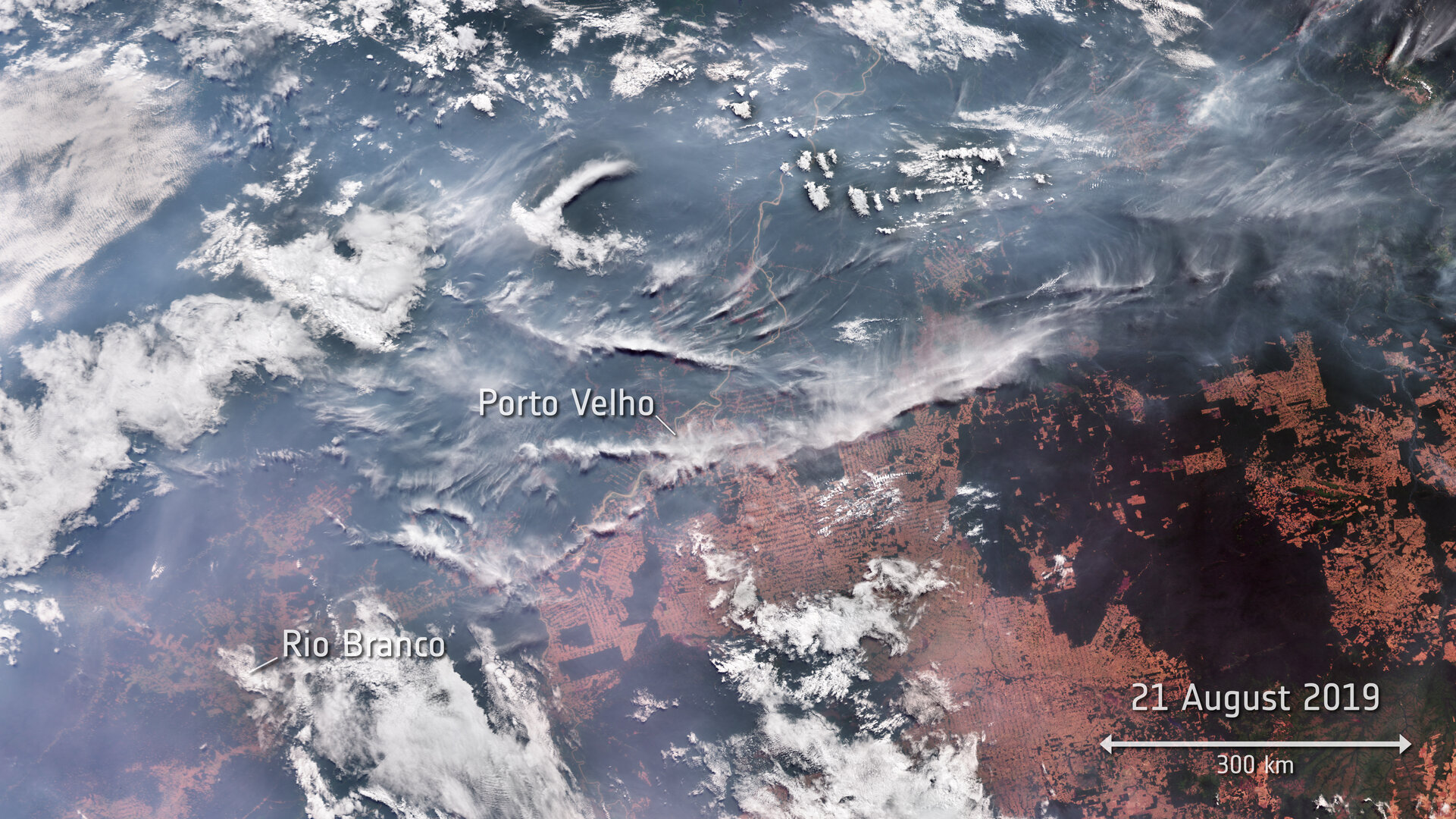 Thousands of fires have broken out in the Amazon rainforest. Satellite data show that there are almost four times as many fires this year compared to the same period last year. Apart from Brazil, parts of Peru, Bolivia, Paraguay and Argentina have also been affected.

While forest fires normally occur in Brazil’s dry season, which runs from July to October, the unprecedented increase is reported to come from both legal and illegal deforestation which allows land to be used for agricultural purposes, rising global temperatures are also thought to be making the region more susceptible to fire.

The Amazon basin is the world’s largest tropical rainforest, spanning four countries and is home to millions of plants and animals. It produces a significant amount of the world’s oxygen – and is crucial for helping to regulate global warming as the forests absorb millions of tonnes of carbon emissions every year.

Using Copernicus Sentinel-3 data, as part of the Sentinel-3 World Fires Atlas, almost 4000 fires were detected from 1 August to 24 August 2019, while last year there were far fewer during the same period, just 1110 fires.

Plumes of smoke have spread across the Amazon region. Strong winds have blown smoke to São Paulo – more than 2500 km away— causing a black out in the city. According to the Copernicus Atmosphere Monitoring System (CAMS), smoke has travelled as far as the Atlantic coast.

CAMS also reports that the fires have released 228 megatonnes of carbon dioxide into the atmosphere, as well as copious amounts of carbon monoxide. The fires also threaten the lives of many indigenous people.

The Copernicus Emergency Mapping Service was activated to help respond to the fire. The service uses satellite observations to help civil protection authorities and, in cases of disaster, the international humanitarian community to help to respond to emergencies.

The severity of the fires has reached the highest political levels. Deemed an international crisis, the G7 nations who met in France yesterday, have offered a 20 million euro emergency funding to assist Brazil and its neighbouring countries to put out the fires, according to French President Emmanuel Macron.

Josef Aschbacher, ESA’s Director of Earth Observation Programmes, said, “As we continue to face the ongoing climate crisis, satellites are essential in monitoring wildfires in remote areas, especially for a key component of the Earth system such as the Amazon.”