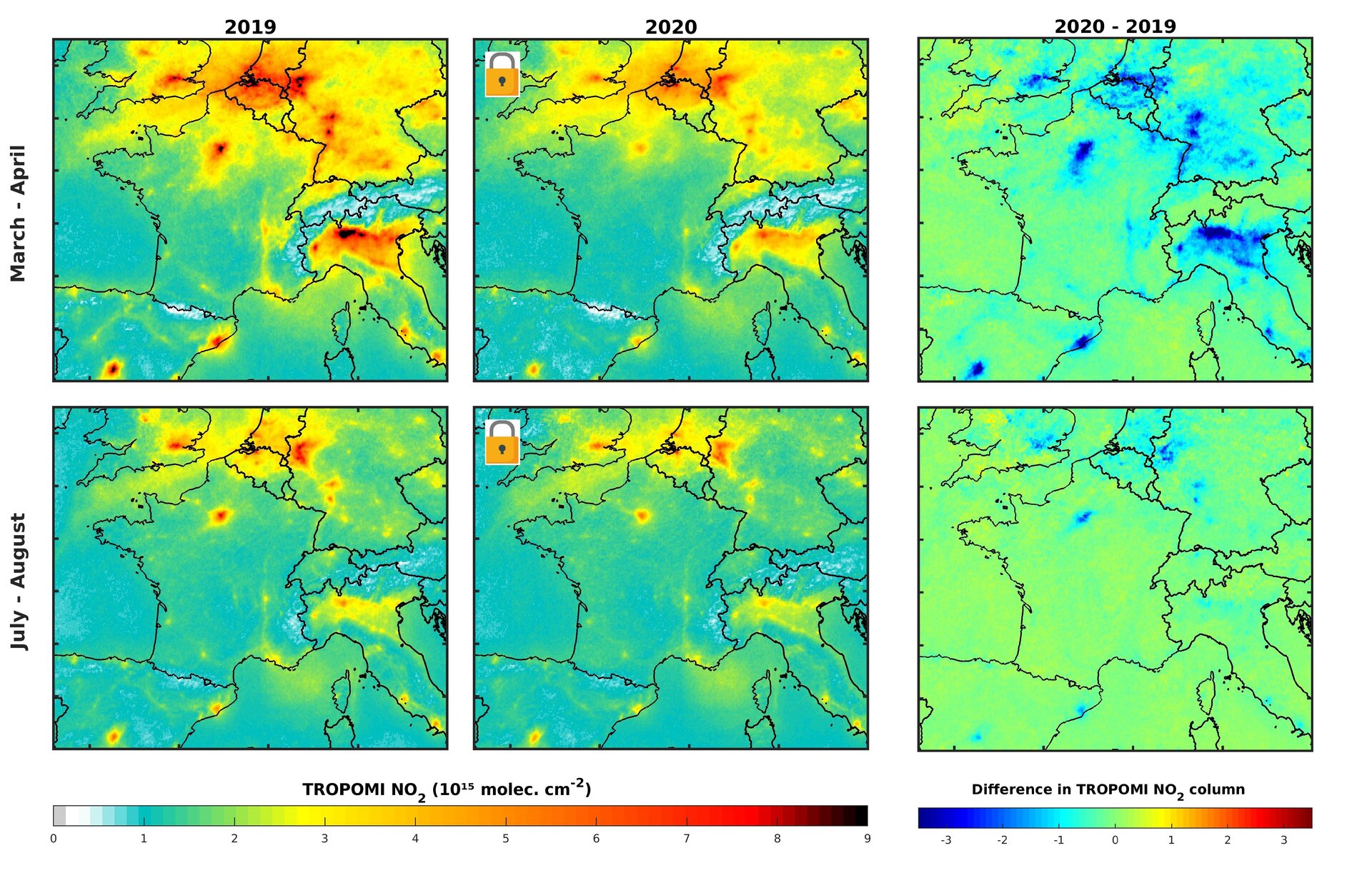 Air pollution is one of the biggest environmental problems of our time. According to a new report from the European Environment Agency (EEA), air pollution now contributes to one in eight deaths in Europe. Observations from the Copernicus Sentinel-5P satellite have been vital in tracking the evolution of air pollution, specifically nitrogen dioxide concentrations, across Europe.

This year, satellite data have been widely used to monitor fluctuations in air quality brought on by strict COVID-19 measures. The Copernicus Sentinel-5P satellite, part of the European Copernicus programme, has been continuously mapping changes of air pollution since its launch in 2017.

Scientists from the Royal Netherlands Meteorological Institute (KNMI) and the Royal Belgian Institute for Space Aeronomy (BIRA-IASB) have used satellite data from Sentinel-5P and ground-based data in order to pinpoint the correlation between COVID-19 and the effects of air pollution across Europe.

The shades of grey denote the lockdown periods in 2020, moving progressively from strict (dark grey) to loose (light grey) measures. The percentages shown in red represent the reduction in 2020 compared to 2019 over the same period.

The data shows that the strongest reductions of 40–50% were seen in the first stage of the lockdown in southern Europe, specifically Spain, Italy and France. In July and August 2020, the data suggests that the concentrations are still 10% to 20% lower than pre-COVID levels.

Bas Mijling, atmospheric scientist at KNMI, comments, “Quarantine measures implemented in Berlin led to a drop of about 20% with small variations seen until August 2020. In eastern Europe, the impact of the measures has been generally less dramatic than in southern Europe, and in France, where reductions of approximately 40–50% were observed during the strict lockdowns of March and April.

Jenny Stavrakou, atmospheric scientist at BIRA-IASB, adds, “The impact of meteorology on the nitrogen dioxide observations could be significant and should not be overlooked. This is why it is necessary to analyse data over longer periods of time, to better estimate the impact of human activity on the observations.”

She continues, “For the monthly mean comparison of 2019 and 2020, we estimate an uncertainty on the COVID-19 induced reduction of around 15–20%.  By comparing the reductions in satellite based data and ground-based data for different cities, we find a satisfactory agreement differences lying well within the uncertainties due to meteorological variability.”

ESA’s Copernicus Sentinel-5P Mission Manager, Claus Zehner, says, “What is really remarkable is the good agreement between the Sentinel-5P satellite data and the ground-based measurements. This demonstrates that air quality monitoring from space can contribute to regular air quality reporting in European countries, which has been only done, so far, using ground-based measurements.”

The lockdowns around March–April in Europe led to significant drops of nitrogen dioxide levels across densely populated and industrialised areas of Europe, including the Ruhr region in Germany and the Po Valley in northern Italy.

These decreases are attributed to the significant contribution of traffic, as well as of the industrial and energy sectors to nitrogen dioxide levels. The concentrations appear to return to near-normal levels in July–August 2020, except over large cities where human activities have not yet fully resumed.

Nitrogen dioxide is released into the atmosphere during fuel combustion from vehicles, power plants, and industrial facilities and can have significant impacts on human health – increasing the likelihood of developing respiratory problems. The Copernicus Sentinel-5P carries the Tropomi instrument – a state-of-the-art instrument that detects the unique fingerprint of atmospheric gases to image air pollutants more accurately and at a higher spatial resolution than ever before.