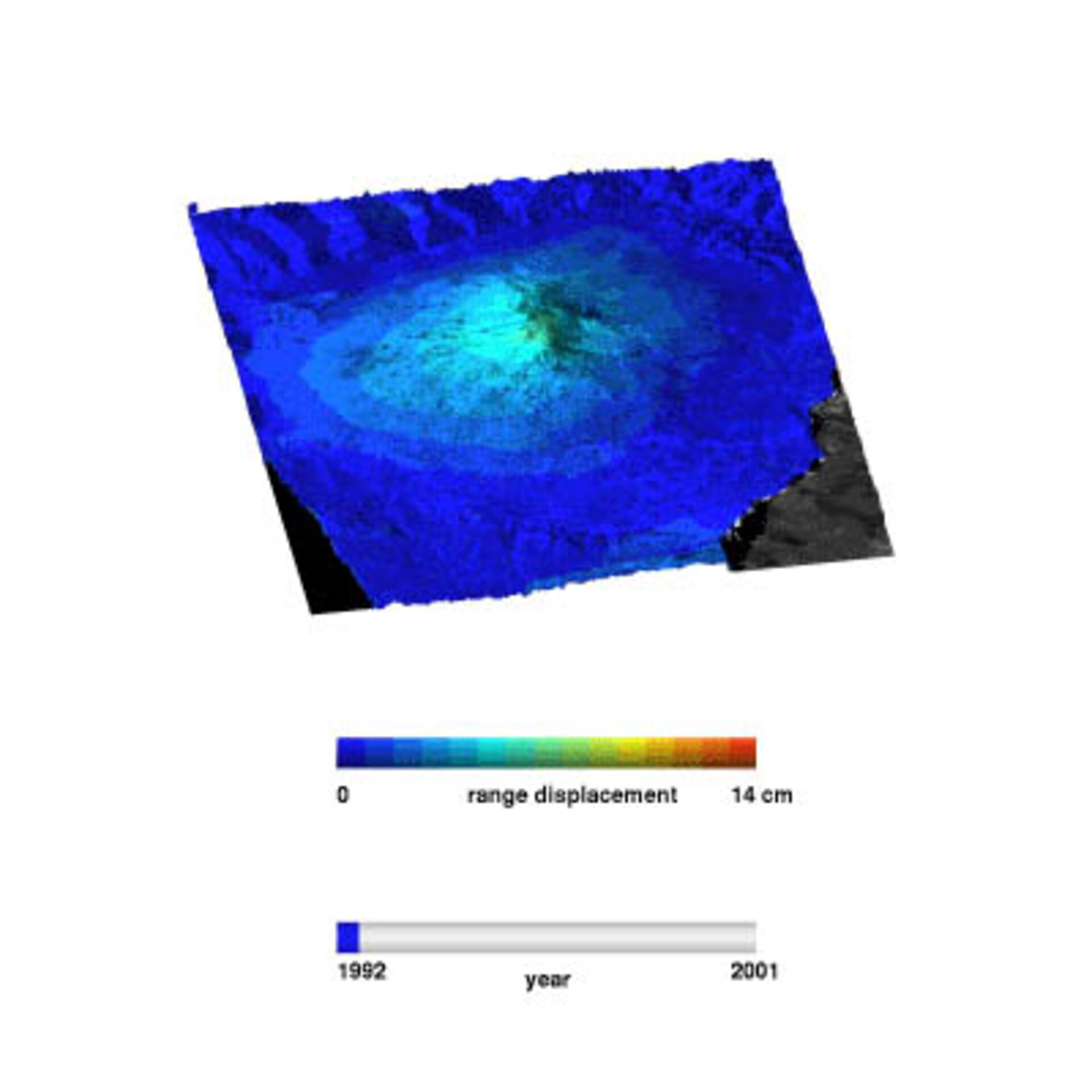 The radar onboard ESA’s ERS-2 spacecraft is helping U.S. and Italian researchers better understand Mount Etna, along with supplying the data for an animation that shows the volcano 'breathing'.

Data from the ERS synthetic aperture radar (SAR) acquired between 1992 and 2000 were used to produce more than 100 interferograms – images produced by analysing the phase differences between consecutive radar images of Etna – that provided the basis for the animation. Such interferometric SAR techniques, known as InSAR, can produce hyper-accurate measurements of terrain movement using satellite data.

The animation displays the surface movement of Mount Etna as the terrain shifts by as much as 14 cm between measurements. Etna initially deflates from 1992-93 at the end of a two-year-long series of eruptions from the volcano’s flanks. The volcano begins to inflate again through 1995 as magma repressurizes its magma chamber. From 1995 through 2000, Etna commences a series of inflation and deflation episodes, a "breathing" process that reflects repeated activity in the summit.

"The goal is to understand the relation between the eruption dynamics and the surface deformation of a volcano," states Paul Lundgren, a research scientist with the Jet Propulsion Laboratory (JPL), Pasadena, Calif., and principal investigator on the project. "By correlating the amount of deformation and their sources with volcanic activity, we will ultimately improve our understanding of how volcanoes work and improve our capabilities to evaluate their hazards."

Lundgren is performing this work under contract with the US National Aeronautics and Space Administration. The ESA data is being provided under the permanent announcement of opportunity for research and applications development using ERS and Envisat Earth observation data. The time series inversion approach used by Lundgren is partially based on an algorithm developed at the Institute for Electromagnetic Surveying of the Environment in Naples, Italy.

The series of flank eruptions in 2001, along with the present upsurge in volcanic activity, are being analysed now. "There was no significant, i.e. measurable deflation during the (2001) flank eruption, suggesting that Etna’s magmatic system remains fully inflated and capable of continued activity, as is currently being observed," Lundgren added.

Such monitoring studies will continue with additional ERS SAR data and the enhanced capabilities of Envisat’s ASAR instrument. For the Etna study, a baseline of information over a long period of time promises fruitful insights into the dynamics of volcanoes and their fiery, unpredictable displays.

"We hope to better understand how the volcano works, especially on longer time scales, such as decades, by connecting larger and larger series of eruptions," the JPL scientist said.