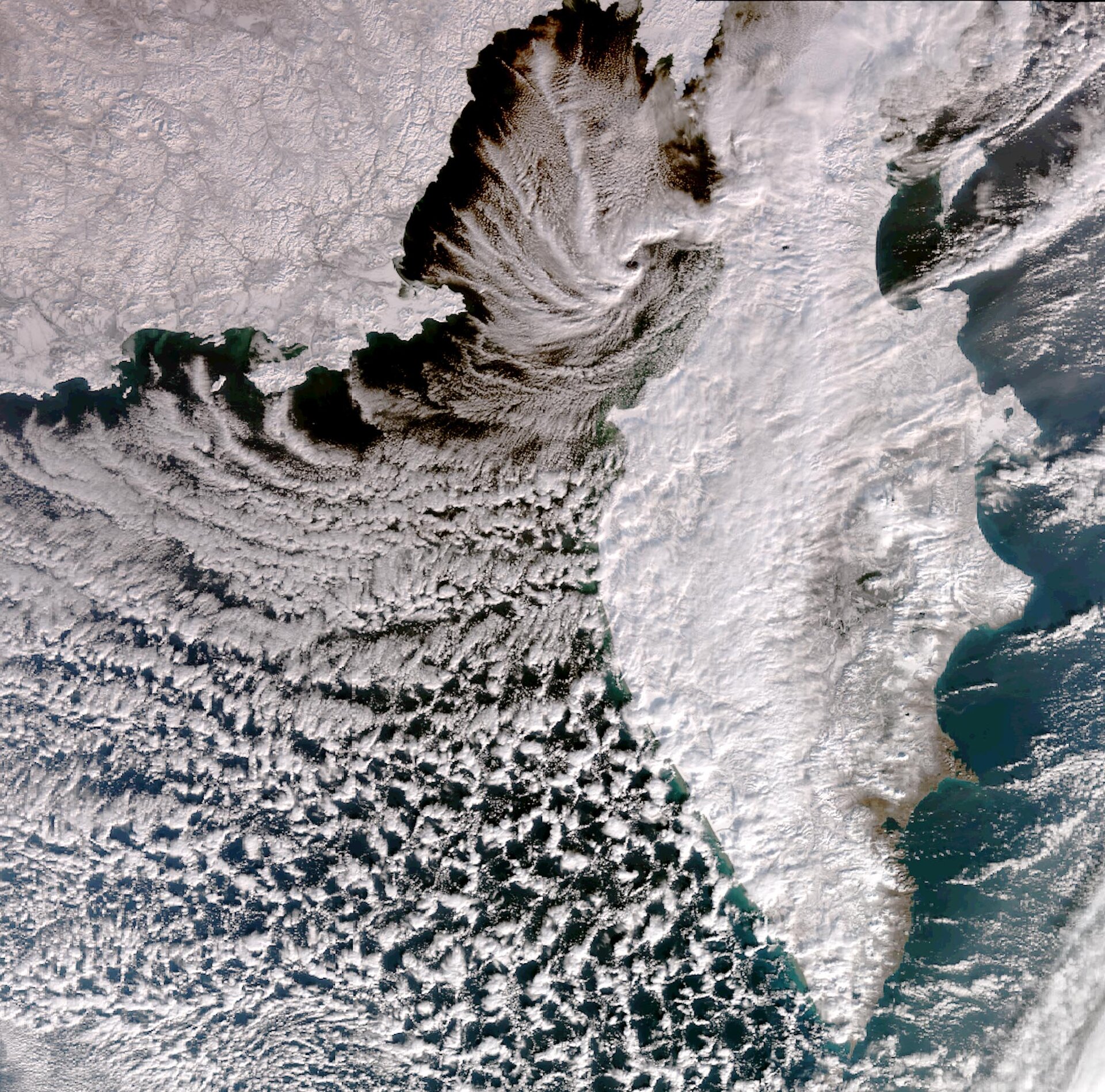 This image captures the rugged and remote Kamchatka Peninsula on Russia's East Coast. The 1250-km long peninsula lies between the Pacific Ocean to the east and the Sea of Okhotsk to the west.

The peninsula’s fish-like shape is due to its mountain ridges - Sredinny, Valaginsky, Ganalsky and Kumroch - stretching from the north to the south.

Kamchatka is located within the Pacific 'Ring of Fire', a continuous 40000-km-long line of volcanoes and fault lines circling the edges of the Pacific Ocean. There are more than 160 volcanoes, of which 22 are active, on the peninsula. The peninsula contains the Volcanoes of Kamchatka, a UNESCO World Heritage Site.

Most of the active volcanoes lie along a fault line on the eastern flank of the Vostochny Range. The 3283-m-high Shiveluch Volcano, the most active of Kamchatka’s arc of volcanoes, is located two thirds of the way up the peninsula. Its most recent activity occurred in December 2009, when it began releasing a white plume of smoke.

The western coastlands form a low plain, while the eastern coast is a combination of gulfs and mountainous peninsulas. The eastern area also contains the Valley of Geysers, considered one of the great natural wonders of the world. In 2007, a huge landslide dumped millions of cubic metres of mud and rocks on the valley, destroying a large part.

The southern tip is called Cape Lopatka. The circular bay to the north of this on the east is Avacha Bay with the capital, Petropavlovsk-Kamchatsky. The four peninsulas seen along the east coast are (from south to north) Shipunsky Point, Kronotsky Point, Kamchatsky Point and Ozernoy Point.

The peninsula’s climate is severe with prolonged cold and snowy winters and wet, green summers.

This image was acquired by Envisat's Medium Resolution Imaging Spectrometer (MERIS) instrument on 12 November 2009, working in Reduced Resolution mode to provide a spatial resolution of 1200 m.