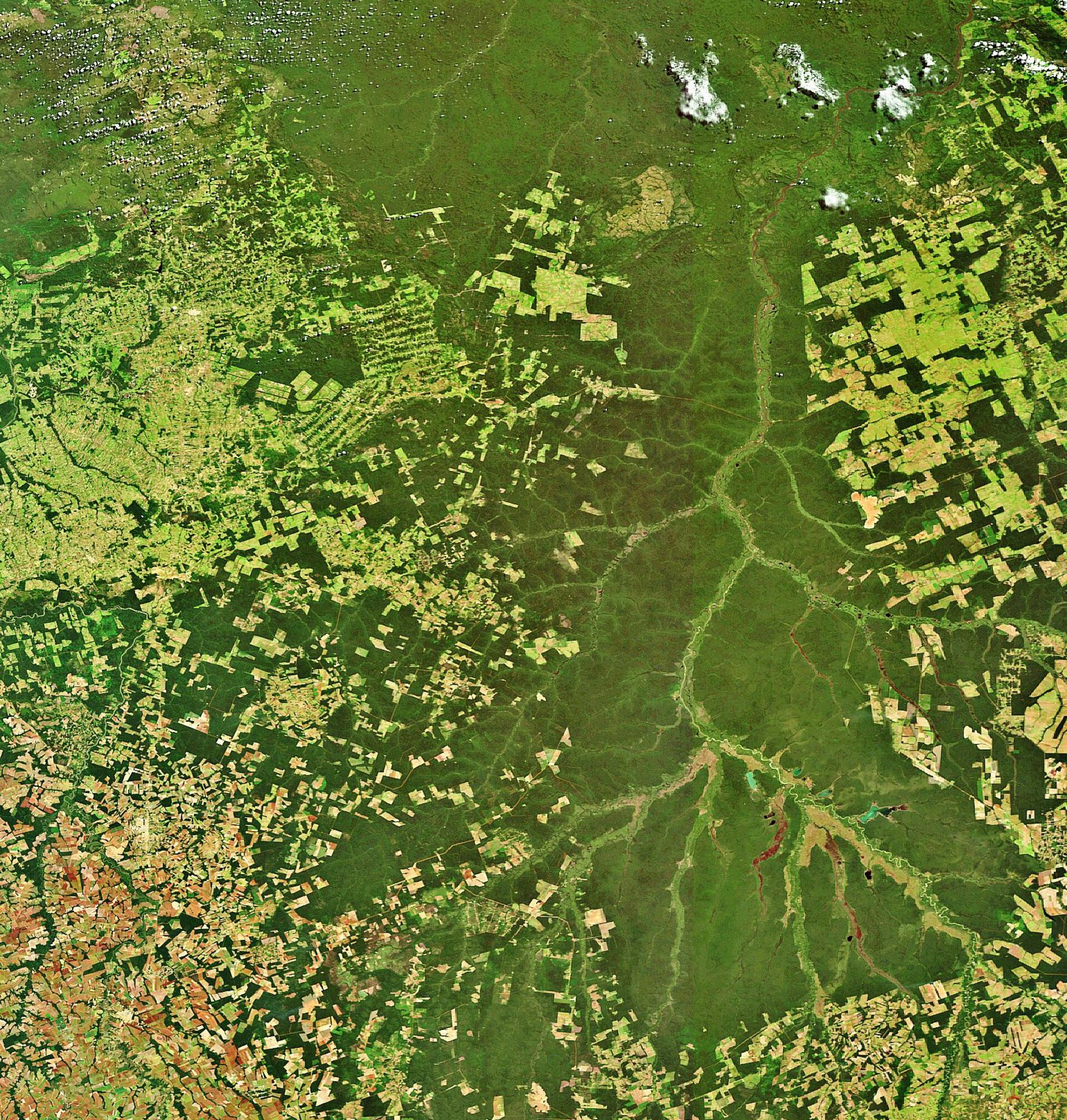 The Xingu River, which flows within the Amazon Basin of central-eastern Brazil, is shown in this Envisat image, which highlights the contrast between the rainforest and sprawling urbanisation.

The Xingu River flows northward approximately 2 100 kilometres from the Brazilian state of Mato Grosso into the Amazon River, the second longest river in the world after the Nile. The rivers that form the Xingu River are: Jatobá, Ronuro, Batovi, Kurisevo and Kuluene, which is the Xingu’s main tributary.

Rapids and falls are plentiful, spanning 644 kilometres long, in the upper part of the Xingu, making only the lower portion of the river navigable. The river passes through partly unexplored country and is a rich area in terms of environment and cultural diversity, with some 14,000 indigenous people from nine different ethnic groups living along it.

In an effort to protect the indigenous people, the Xingu National Park, an area of 26,000 square kilometres, was created in 1961. The park has allowed 14 different tribes that were previously warring to learn to live together. But according to the Kaxi Amazon News Agency, ranchers and loggers have encroached on the park and threaten to pollute the river.

Last month Brazilian supermodel Gisele Bundchen endorsed a campaign by the Socioenvironmental Institute to protect the rain forest along the Xingu River from deforestation and pollution. The campaign is called ‘Y Ikatu Xingu,’ which means ‘clean and good Xingu water,’ in the native Kamaiura language. According to the Kaxi Amazon News Agency, Bundchen will "tell the world that the Amazon's waters are in danger."

The Tapajós-Xingu moist forest ecoregion lies between the Tapajós, to the west of Xingu, and Xingu rivers and is home to over one hundred and sixty species of mammals and more than five hundred and fifty species of birds. However, the Transamazon Highway traverses this area and has increased the level of urbanisation, timber extraction and gold mining.

Urbanisation has increased all over the world with people moving away from rural areas to towns and cities. Brazil has a relatively high level of urbanisation with an estimated 8 out of 10 people living in cities – roughly 144 million out of 180 million.

This growth needs to be monitored to ensure it proceeds on a sustainable basis, does not damage environmental resources and does not worsen the quality and life and safety of urban dwellers. The sheer scale of cities can make this difficult to achieve – at least from down here on Earth.

Earth Observation-derived maps of land use change show how cities expand over time. Such information products are valuable to governmental organisations as well as conservation groups. In the field of risk management, satellite imagery can characterise urban environments to a degree of accuracy simply not available on the ground.

This 30 May 2006 image was acquired by Envisat's Medium Resolution Imaging Spectrometer (MERIS) working in Full Resolution mode to provide a spatial resolution of 300 metres. The image has a width of 462 kilometres.