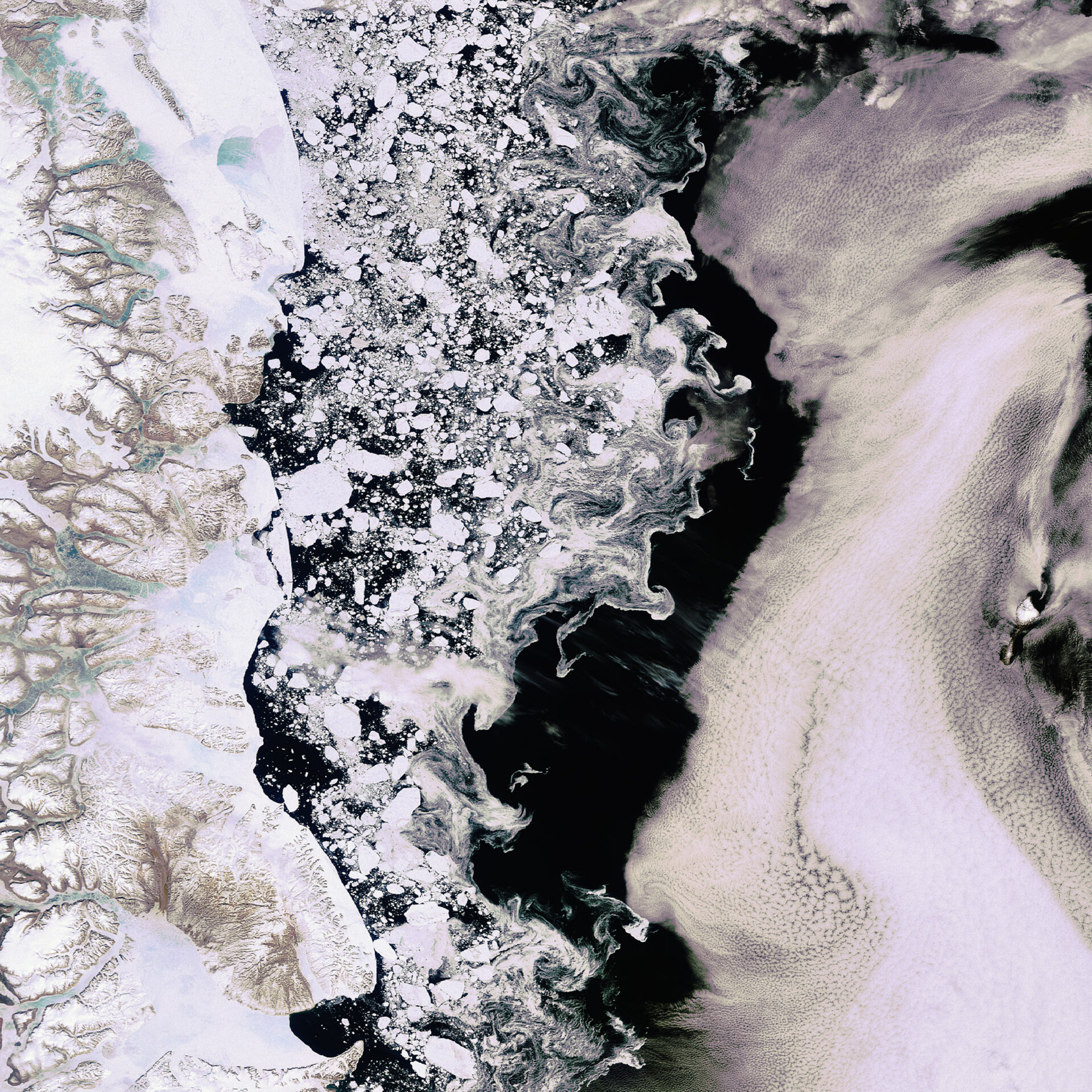 This Envisat image captures the marginal ice zone, a region that forms at the boundary of open and frozen oceans, of the Greenland Sea during the onset of spring melting.

The bright white swirls at the ice edge are traced out by brash ice – small sea-ice fragments of ice floes that have been broken up by waves. Larger ice floes can be spotted drifting southwards in the East Greenland Current, which flows southward along the eastern coast of Greenland (visible running down image left).

Swirls indicate drift of the small pieces of ice in response to ocean vortexes, or ‘eddies’, and are an expression of the ocean surface currents. The myriad of swirls show how dynamic the upper ocean is at this time of year because of strong gradients in temperature and salinity.

Arctic sea ice naturally extends its surface coverage each northern winter and recedes each northern summer, but according to scientific measurements it has declined dramatically in the last three decades. In 2007, the area covered by sea ice in the Arctic shrank to its lowest level since satellite measurements began nearly 30 years ago, with the ice-covered area dropping to around 3 million sq km, which is about 1 million sq km less than the previous minima of 2005 and 2006.

Considering the average reduction of ice cover per year over the last 10 years has been about 100 000 sq km, a drop of 1 million sq km in just one year is extreme. As the ice-covered area shrank, it opened up the Northwest Passage – a long-sought short cut between Europe and Asia that has been historically impassable.

Because sea ice has a bright surface, the majority of solar energy that hits it is reflected back into space. When sea ice melts, the dark-coloured ocean surface is exposed. Solar energy is then absorbed rather than reflected, so the oceans get warmer and temperatures rise, making it difficult for new ice to form.

Along the right side of the image, a bank of clouds is shown forming the westerly winds blow off the sea ice.

This image was acquired by Envisat's Medium Resolution Imaging Spectrometer (MERIS) on 14 June 2008, working in Full Resolution mode to provide a spatial resolution of 300 m.