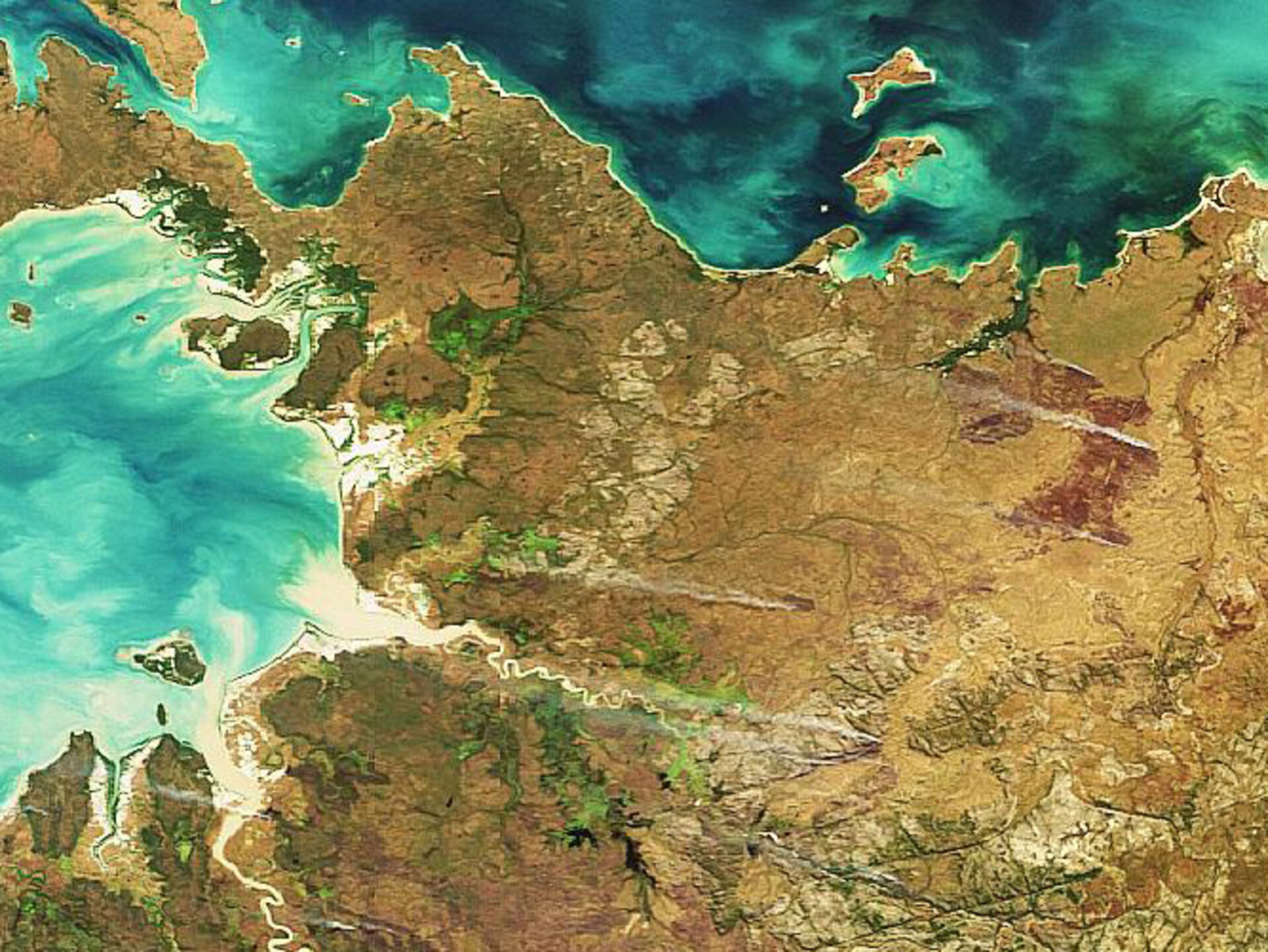 This image of Australia’s northern territory – the Outback setting for the blockbuster hits Crocodile Dundee and Crocodile Dundee II – was acquired on 20 June by Envisat’s Medium Resolution Imaging Spectrometer (MERIS) instrument and clearly highlights plumes of smoke from burning fires.

Australia has a history of bushfires, which have been responsible for many deaths and enormous economic losses. For instance, on 16 February 1983 over 100 bushfires started in Victoria and South Australia and burnt over one million hectares and resulted in 76 deaths. This devastating series of fires has come to be known as ‘Ash Wednesday’.

The country’s predominantly flat, dry and warm landscape makes it prone to fires year round, but the risks increase during its hottest months – November through March – which are accompanied by intense heat and low rainfall. In addition, Australia’s native vegetation burns quickly and easily. Eucalyptus trees, for example, contain oil which makes them especially dangerous in a bushfire.

Although most bushfires on the continent begin naturally, some are set intentionally by Australian farmers and aboriginal tribes to reduce the risk of severe fires during the intense dry season. Fire-management authorities also regularly ignite prescribed burns to remove potential fuels. It is unclear whether the fires seen in this image are intentional burns.

These and surrounding fires were also detected on the same day by Envisat’s Advanced Along Track Scanning Radiometer (AATSR) instrument and made available to users online through ESA's ATSR World Fire Atlas (WFA) within hours of acquisition. Red dots on the map indicate fire spots.

The AATSR radiometer sensor works like a thermometer in the sky, measuring thermal infrared radiation to take the temperature of Earth's land surfaces. Temperatures exceeding 312º K (38.85 ºC) are classed as burning fires by AATSR, which is capable of detecting fires as small as gas flares from industrial sites because of their high temperature.

More than 50 million hectares of forest are burnt annually worldwide, and these fires have a significant impact on global atmospheric pollution, with biomass burning contributing to the global budgets of greenhouse gases, like carbon dioxide, making the quantification of fire important for the ongoing study of climate change.

There are over 650 registered users accessing the WFA, an ESA Data User Programme (DUP) project. The data are being used in Europe, Asia, North America, South America, Africa and Australia for research in atmospheric chemistry, land use change, global change ecology, fire prevention and management and meteorology.