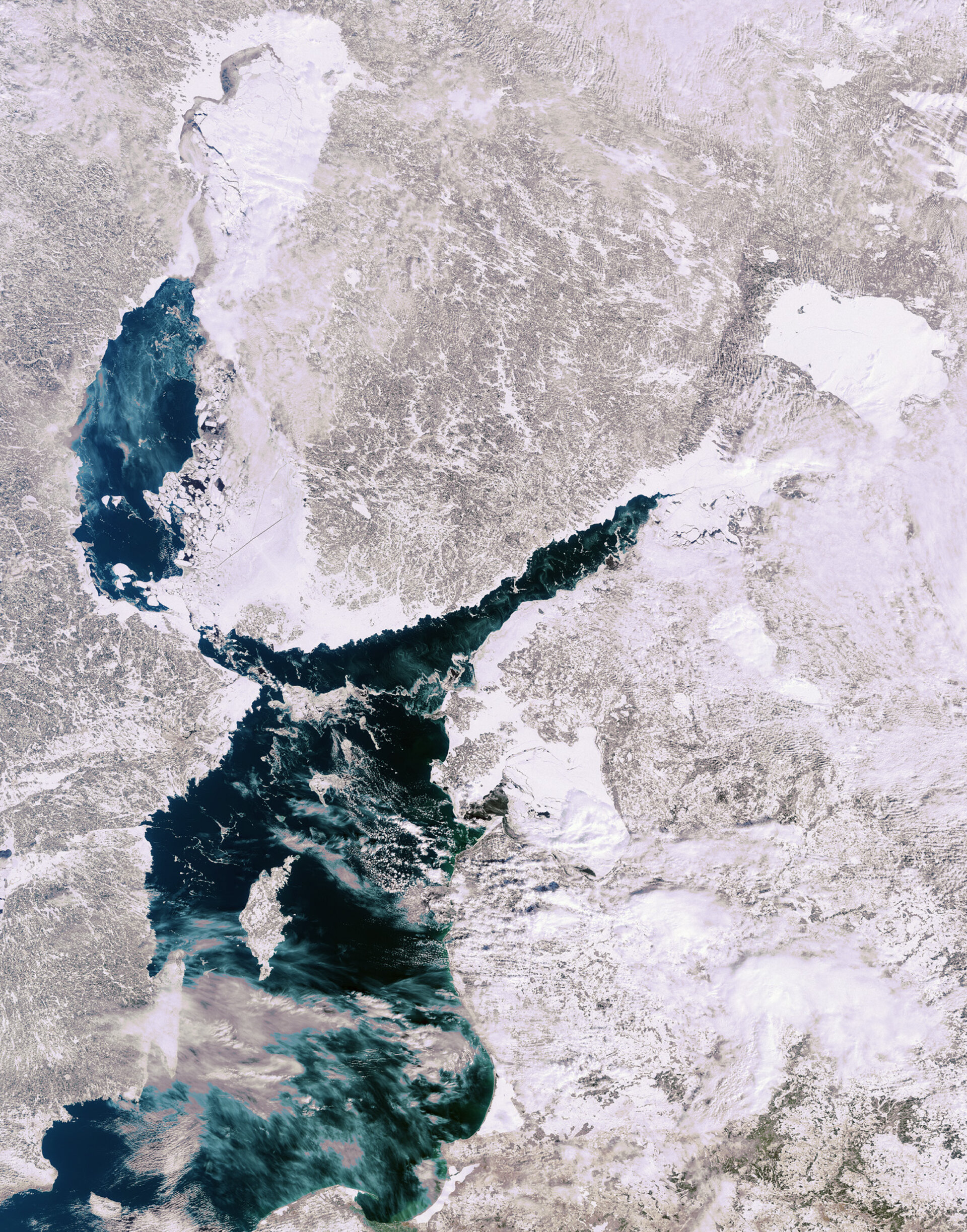 This Envisat image captures the Baltic Sea, with the northern part of the Gulf of Bothnia (top), the Gulf of Finland (right) and the Gulf of Riga (directly below image centre) covered in ice.

An arm of the North Atlantic Ocean, the Baltic Sea separates the Scandinavian Peninsula (left) from the rest of continental Europe. The sea is roughly 1610 km long, 190 km wide and has a surface area of about 377 000 sq km, making it the largest body of brackish water in the world.

While ice cover varies from year to year, during an average winter about half of the Baltic Sea’s surface is ice covered. As it is a vitally important waterway for transportation and shipping, sea ice can be a major hazard for passenger and commercial vessels during the winter and early spring.

This year’s unusual freezing conditions and gale-force winds resulted in the worst ice cover since 1996, causing about 50 cargo and passenger vessels to be trapped in the sea between Sweden (left) and Finland (top centre).

The vessels were stuck for several days in early March and had to be freed by icebreaking vessels dispatched by the Swedish Maritime Administration (SMA), which relies on Earth-observation satellite data from the ESA-backed Polar View initiative to coordinate its operations. The SMA also uses Polar View’s sea-ice forecasting service on each of its Finnish and Swedish icebreakers to see how the ice is changing for safe navigation.

Polar View, supported by ESA and the EC with participation from the Canadian Space Agency, was established under the EU’s Global Monitoring for Environment and Security (GMES) initiative.

The northern basin of the Gulf of Bothnia, known as the Bay of Bothnia, typically ices over in early January, while the Gulf of Finland and the Gulf of Riga usually freeze in late January. Normally, the ice reaches a maximum extent in February or March.

Russia’s major city of St. Petersburg is located at the eastern end of the Gulf of Finland and beside it the frozen Lake Ladoga, which is typically frozen from February to May. With a total area of about sq km, Ladoga is Europe’s largest freshwater lake and is the main source of drinking water for the inhabitants of St. Petersburg.

This image was acquired on 15 March 2010 by Envisat's Medium Resolution Imaging Spectrometer instrument, working in Full Resolution mode to provide a spatial resolution of 300 m.