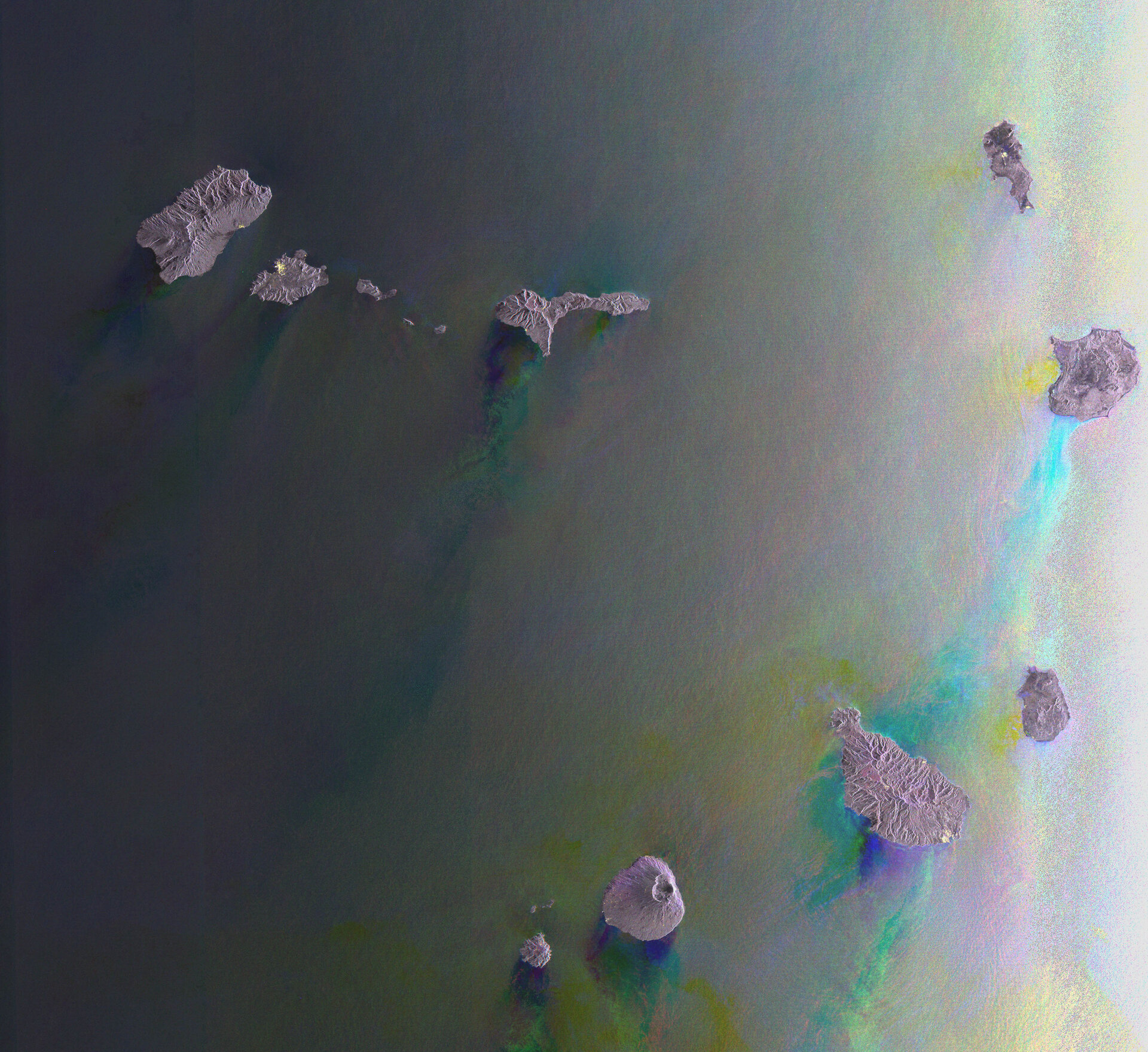 This Envisat image captures the Republic of Cape Verde, a group of volcanic islands located in the North Atlantic Ocean some 600 km off Africa’s west coast.

Weather varies on each island but temperatures generally hover around the high 20s with very little rain. Due to their position in the Atlantic, the islands experience windy conditions and the northeast trade wind can be particularly strong at times. Lying in the same latitude of the Sahara, trade winds carry Saharan dust to the area frequently.

Although the islands are all volcanic in origin, their terrain varies widely. Santo Antão’s rugged and mountainous landscape is considered the most spectacular of the archipelago. As visible, an extensive mountain range (with altitudes exceeding 1500 m) divides the island, with the northwestern slope being the most fertile. With an area of 779 sq km, it is the second largest island of the archipelago.

São Vicente is said to be the most cultural and cosmopolitan centre of Cape Verde. Historically, Mindelo’s port (visible in yellow on the northeast coast) served as a coaling station for trans-Atlantic steamer boats.

Santa Luzia is the smallest of the islands (35 sq km). It is very dry and barren and is the only permanently uninhabited island in the archipelago. Although it had inhabitants in the past, desertification led to its abandonment.

São Nicolau has a mountainous interior with two prominent peaks, one near the middle and one on the west end. Sal, the flattest island of the archipelago, takes its name from salt mines that once operated there. Home to an international airport and white sand beaches, it attracts many tourists.

Boa Vista boasts unspoilt beaches along the coasts, while volcanic rock reigns throughout its interior. Maio is a flat, barren island with deserted white beaches. It shows very little evidence of its volcanic past because of the influence of wind erosion over the years.

Santiago, home to Cape Verde’s capital Praia, is the most densely populated island. With a surface of 991 sq km, it is the archipelago’s largest island. As visible, its interior is mountainous.

Fogo is an immense, active volcano that last erupted in 1995. With the summit reaching 3000 m in height, it is the highest point of the archipelago. The Pico volcano (visible) is located in the northeast.

Brava (the archipelago’s smallest island) has a humid and cool climate, making it the wettest and greenest. It is very mountainous and rises abruptly from the sea.

This image was created by combining three Envisat Advanced Synthetic Aperture Radar (ASAR) acquisitions (21 November 2006, 6 May 2007 and 23 August 2009) taken over the same area. The colours in the image result from variations in the surface that occurred between acquisitions.