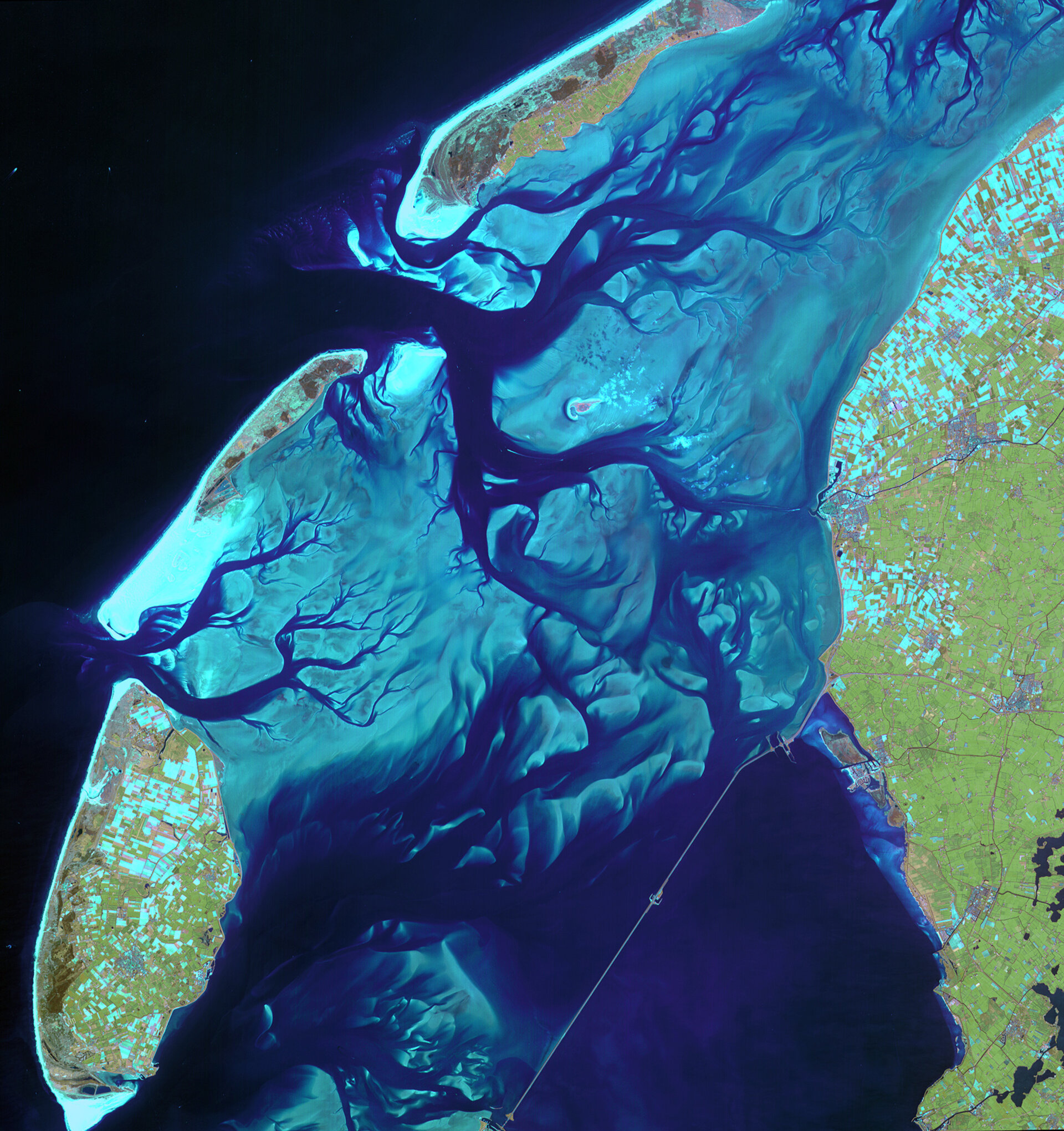 This satellite image shows the ever-moving sandbanks in the shallow Wadden Sea in the north of the Netherlands. Declared a UNESCO World Heritage Site last year, this unique region is one of the largest wetlands in the world.

Shaped by the ebb and flow of the tides, waves and wind, the area appears very different depending on the time of day; at times there are kilometres and kilometres of open mud flats full of life and the next moment, awash with incoming waters from the North Sea. These tidal flats and wetlands give rise to an excellent habit for a wealth of wildlife, in particular, an estimated 1.5 million migrating birds.

As this satellite image shows, the sandbanks are bordered by relatively deep channels and gullies, which provide a route for boats crossing between the islands and mainland.

The image shows the southern part of the Wadden Sea with part of the Dutch mainland on the right and the island of Texel at the bottom left, and Vlieland and Terschelling to the northwest.

The impact of waves and currents, which carry away sediment, is slowly changing the layout of these and the other islands further west. For example, the islands of Vlieland and Ameland, which is not visible here but it is the next island after Terschelling, have moved eastwards over the centuries and are being eroded on one side and growing on the other.

The Wadden Sea, a name that comes from the Dutch 'wad' for mud flat, extends from the south of Texel, along the coast of Germany to just north of Esbjerg in Denmark, a total length of some 500 km.

Also visible in the image is the 'Afsluitdijk' – a causeway that creates a division between the Wadden Sea to the north and the Zuiderzee to the south. Built between 1927 and 1933, this causeway dammed off what was a salt water inlet of the North Sea and turned into a fresh water lake.

SPOT-4 acquired this image on 8 May 2006 with a spatial resolution of 20 m. SPOT-4 is supported by ESA as a 'Third Party Mission', which means ESA utilises its multi-mission European ground infrastructure and expertise to acquire, process and distribute data from the satellite to its wide user community. The SPOT system was designed by the French space agency (CNES) and is operated by Spot Image.