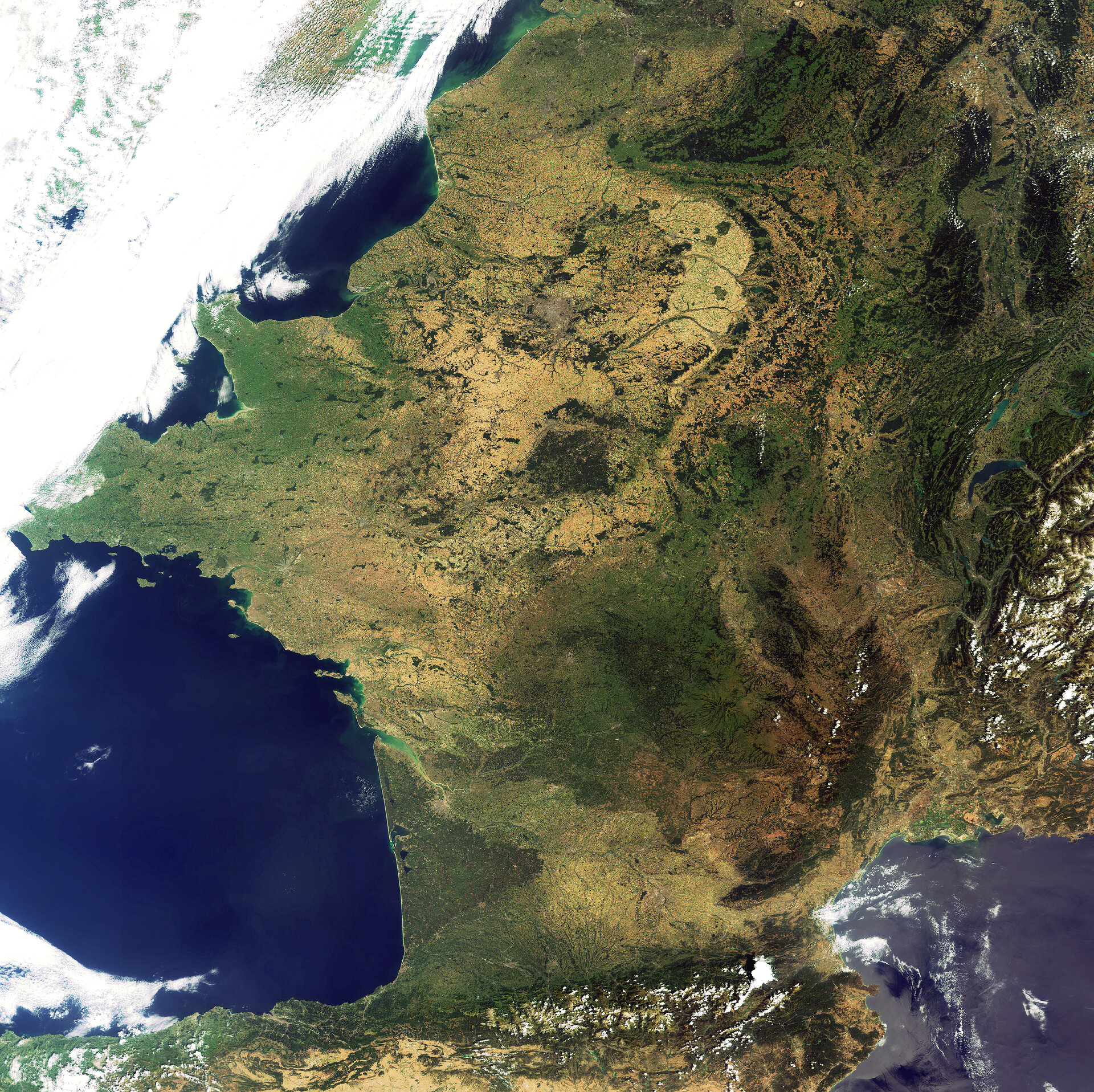 This Envisat image features a cloud-free France, located in Western Europe. As visible in the image, France’s topography is one of the most varied in Europe, ranging from broad plains to the continent’s highest peak.

Mountain ranges are prevalent across France. The Alps (bottom right, with sparse cumulus cloud coverage) extend some 1200 km through France, Switzerland, Italy and Austria and occupy an area of about 200 000 sq km. This massive range is home to Mont Blanc (dusted with snow, southeast of the dark blue lake), Europe’s highest peak at 4810 m.

The Pyrenees (visible in dark green with light cloud coverage at bottom centre) form the natural border between France and Spain. Massif Central (northeast of Pyrenees) is France’s third largest mountain range. Also visible in dark green are some medium-height mountains: the Vosges and the Black Forest (around the border between France and Germany, top right), the Jura (northwest of the Alps) and the Ardennes (on the border with Belgium and Germany, top).

Along with the Ardennes Mountains, the hilly, wooded Ardennes Plateau is visible in northeast France. Low hills and meadows (green) characterise the regions of Brittany (peninsula jutting westward into the Atlantic Ocean) on the west coast and Normandy (top left) in the north. The area around the capital city of Paris (gray patch above image centre) is vast lowland, with wheat fields (seen in yellow) and forests (small green patches). The triangular-shaped forest visible in southwest France (above the Pyrenees) is Landes, the largest in Western Europe.

Lakes are also an abundant feature of the French landscape. The dark blue crescent-shaped lake visible between the Alps and Jura mountains is Lake Geneva. It is the largest Alpine lake in Europe. The northern part of the lake belongs to Switzerland, and the southern part belongs to France. The aqua-coloured Lake Neuchâtel above Lake Geneva is located in Switzerland.

The mouth of the Garonne River in southwest France is visible due to sediments (green and tan swirls) emptying into the Bay of Biscay by way of the estuary called the Gironde. The port city of Bordeaux (visible in gray) on the Garonne River is located near the point where the Garonne and Dordogne rivers meet to form the Gironde estuary.

Also located on the banks of Garonne is the city of Toulouse (visible in gray and tan southeast from Bordeaux, above the Pyrenees). France’s fourth largest city, Toulouse is the home base of the European aerospace industry.

Green and tan sediments visible flowing into the English Channel west of Paris are from the Seine River.

Brussels, the capital city of the EU, is visible in gray above the Ardennes (dark green triangular shape). The cities of Charleroi, Liège and Mons are situated along the gray strip between Brussels and the Ardennes.

This image was acquired by Envisat's Medium Resolution Imaging Spectrometer (MERIS) instrument on 15 August 2009, working in Full Resolution mode to provide a spatial resolution of 300 m.