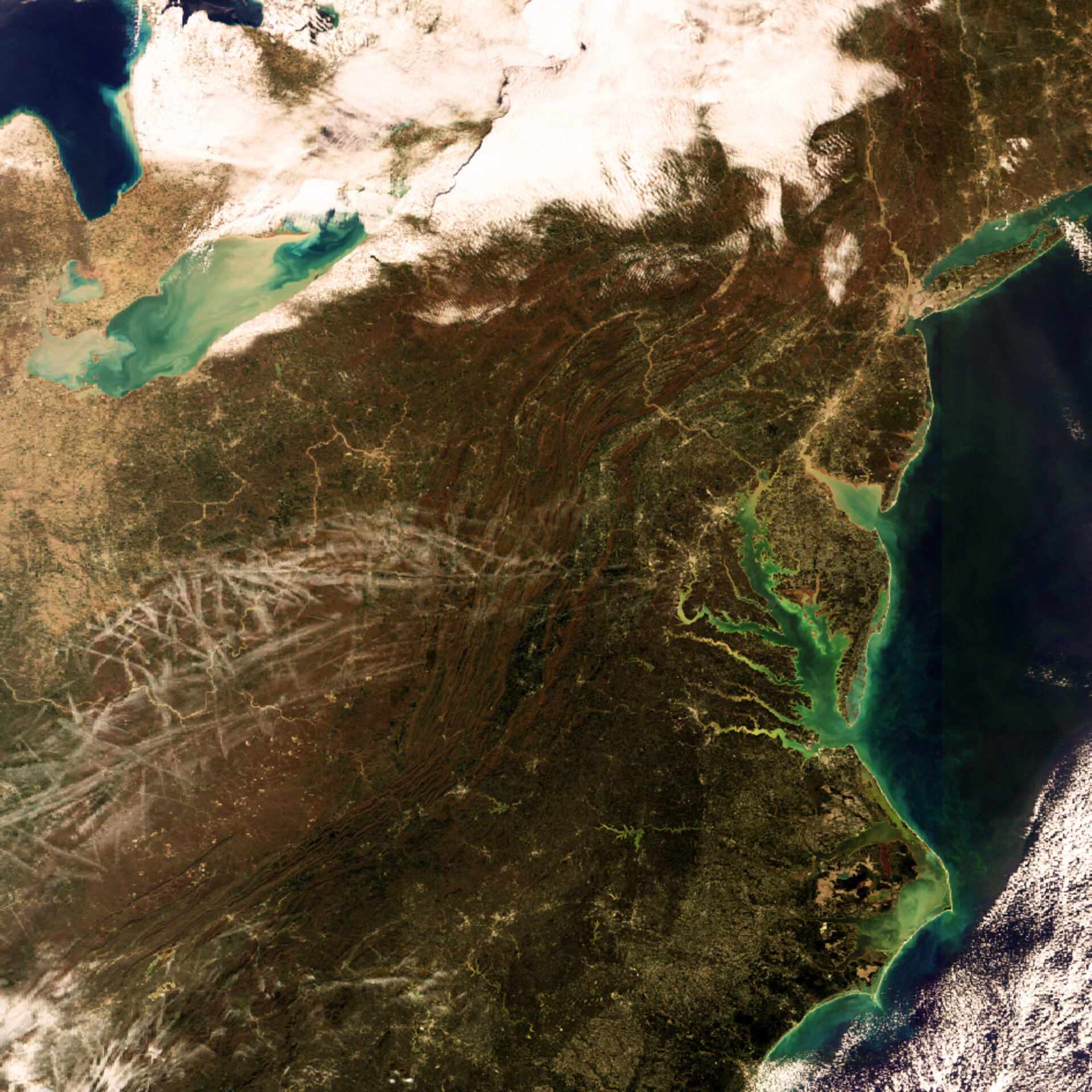 Aircraft condensation trails or 'contrails' are clearly visible slicing across the East Coast of the United States in this Envisat image.

The image stretches south from the US-Canadian border down to the Appalachian Mountains and east from Ohio to New York, New Jersey, Delaware and Maryland.

A dense collection of the straight clouds called contrails is seen between the cities of Cincinnati, Columbus and Pittsburgh. Exhaust emissions from jet aircraft contain large amounts of water vapour which, under certain atmospheric states, will condense to form ice crystals. These act as condensation nuclei around which even more water vapour in the surrounding air condenses. The end result is the formation of an elongated cloud-like condensation trail in the sky.

Contrails could potentially have an impact on the Earth's climate, especially as they often spread out to form persistent artificial cirrus clouds which would not otherwise have existed. As part of ESA's Data User Element, the Agency is working on a project called CONTRAILS to develop a satellite-based service to monitor daily contrail and cirrus cloud production over Europe and the North Atlantic, some of the busiest airspace in the world. The project concludes at the end of this year, with the results of its detailed assessment of the greenhouse impact of aviation-induced contrails being due in 2006.

Towards the top of the image on the US-Canadian border is Lake Erie, the smallest of the five Great Lakes of North America by volume. It is also the shallowest of the Great Lakes, with an average depth of 19 metres. Its milky white colour could be due to elevated levels of calcium carbonate sediments in the water.

Note also the tint of the water along the Atlantic coast, particularly around Delaware midway up the image, and New York's finger-shaped Long Island further north. This is due to sediments from river discharge as well as algae blooms.

This image was acquired by Envisat's Medium Resolution Imaging Spectrometer (MERIS) on 19 November 2005, working in Reduced Resolution mode to deliver spatial resolution of 1200 metres. The image has a width of 1135 kilometres.