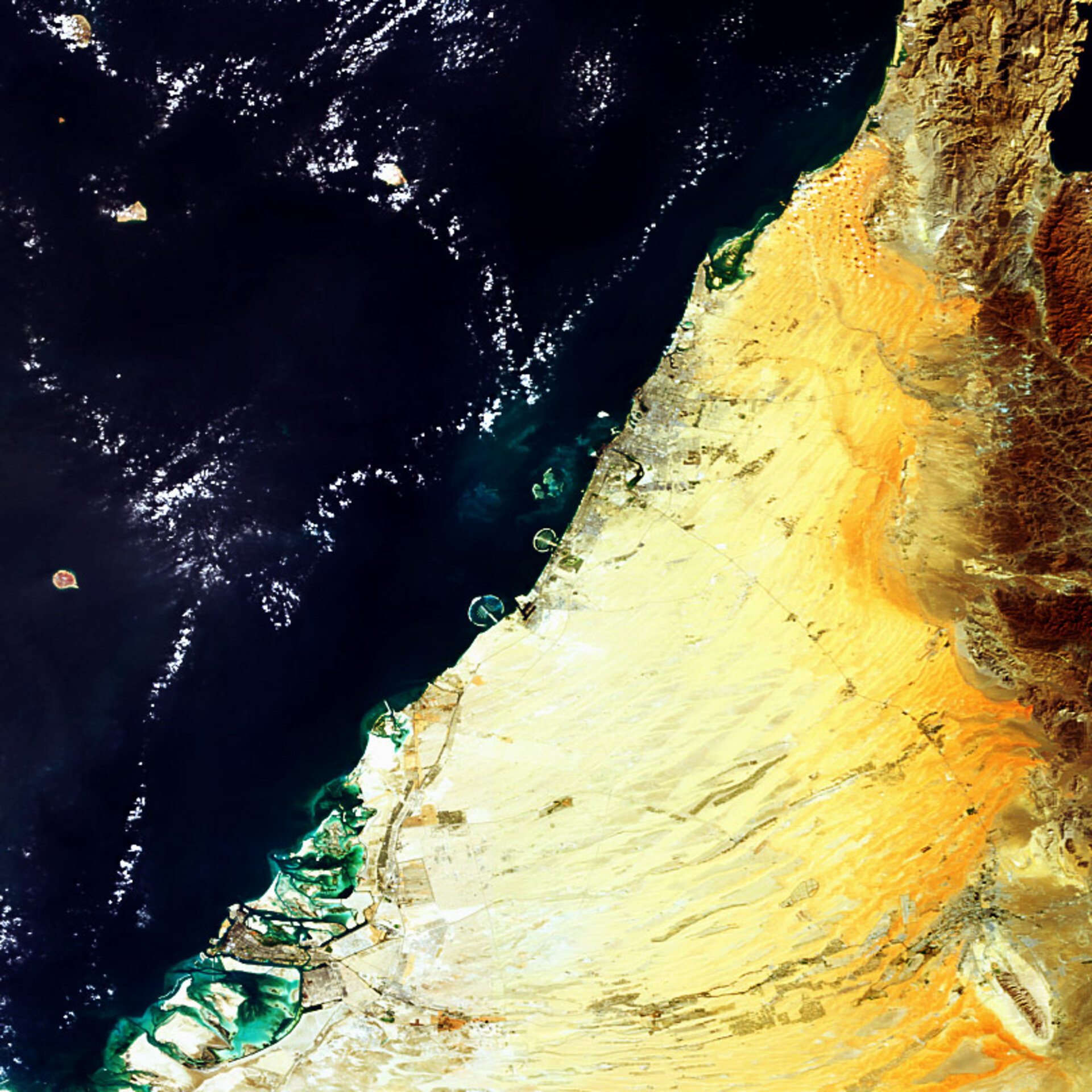 The man-made Palm Islands and World Islands on the coast of Dubai are highlighted in this Envisat image.

Each of the Palm Islands – Palm Jumeirah (seen in the middle), Palm Jebel Ali (on the far left) and Palm Deira (not yet visible) – is being built in the shape of a date palm tree, consisting of a trunk and a crown of divided, elongated leaves, and has a surrounding breakwater to protect against the impact of waves.

The Palm Jumeirah, expected to be completed in 2006, is the smallest of the three islands and is primarily a retreat and residential area. Fifty percent larger than Palm Jumeirah, the Jebel Ali Palm, due to finish in late 2007, is more of an entertainment destination and will include a water theme park.

The Palm Deira is the last and largest (80 square kilometres) instalment in the palm project and will be located six kilometres from The World Islands. Upon completion in 2010, it will consist of residential property, marinas, shopping malls and sports facilities.

The World Islands project (seen on the right), located close to the Palm Jumeirah, is a collection of 300 islands shaped into the continents of the world, each ranging in size from 23 226 to 83 613 square metres. The only means of transportation between the islands, which are separated by 50 to 100 metres of water, is by marine or air transport.

The relatively shallow depth of the Persian Gulf and the wide continental shelf off the Dubai coast make the construction of these artificial islands possible. The islands are comprised of approximately 100 million cubic metres of rock and sand and will increase Dubai's shoreline by 120 kilometres.

Dubai is one of the seven emirates that make up the United Arab Emirates (UAE), which was formed in 1971 by the former Trucial States – Dubai, Abu Zaby, 'Ajman, Al Fujayrah, Ash Shariqah, Umm al Qaywayn – upon independence from Britain. Ra's al Khaymah joined the states in 1972.

The UAE, which is located in the Middle East, bordering the Gulf of Oman and the Persian Gulf, between Oman and Saudi Arabia, discovered oil some thirty years ago. Today its oil and gas output accounts for about 30 percent of its gross domestic product (GPD). At present levels of production, oil and gas reserves are expected to last for more than 100 years.